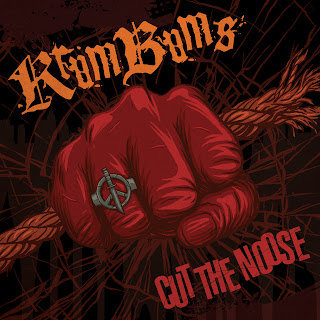 The day has finally come and tomorrow sees the release of the highly anticipated and critically acclaimed new album "Cut the Noose" from Austin, TX punks KRUM BUMS.  The band is in the midst of a North American tour with Holy Grail and Toxic Holocaust in support of the new record.
As a part of their Full Album Listening Party Series AOL Music is streaming "Cut the Noose" in its entirety at http://music.aol.com/new-releases-full-cds#/15.
Recently the band shot a video for their single "Gasoline".  Directed by Jon Hale the video is being available for viewing AltPress.com the online home of Alternative Press magazine.  Check it out here: http://www.altpress.com/aptv/video/premiere_the_krum_bums_gasoline/
You can order your copy of "Cut the Noose" in one of many special bundle packs at http://www.cmdistro.com/Search/krum_bums
Produced by Jason Buntz (Iron Age, Lower Class Brats, World Burns to Death), "Cut the Noose", harnesses the raw, untamed energy of KRUM BUMS, with Buntz functioning as the key ingredient around which the songs coalesced. KRUM BUMS have taken all of their hardship and pain and thrown it unflinchingly into "Cut the Noose". Always a live force to be reckoned with, "Cut the Noose" finds the band refining their sound, defying expectations and redefining what punk rock is all about.
KRUM BUMS ON TOUR WITH TOXIC HOLOCAUST
8/23: Cleveland, OH @ Now That's Class
8/24: Detroit, MI @ Magic Stick
8/25: Chicago, IL @ Reggie's Rock Club  *Like what you hear?   Check 'em out this Thursday at Reggies (all ages-starts at 6pm).
8/26: Milwaukee, WI @ Cactus Club
8/27: Minneapolis, WI @ Triple Rock
8/28: Des Moines, IA @ Vaudville Mews *(Headlining)*
8/29: Omaha, NE @ The Hole *(Headlining)*
8/30: Denver, CO @ Marquis Theater *(Headlining)*
8/31: Salt Lake City, UT @ Burt's Tiki Lounge *(Headlining)*
9/1: Boise, ID @ The Shredder *(Headlining)*
9/2: Seattle, WA @ El Corazon
9/3: Bremerton, WA @ The Charleston
9/4: Portland, OR @ Branx
9/6: Sacramento, CA @ The Fire Escape
9/7: Oakland, CA @ The Metro
9/8: Long Beach, CA @ Di Piazza's
9/9: San Diego, CA @ The Shakedown
9/10: Los Angeles, CA @ The Blvd
9/12: Phoenix, AZ @ The Nile
For More Info Visit:
http://www.facebook.com/krumbums
http://www.myspace.com/krumbums
http://www.peoplelikeyourecords.com
Posted by Bonnie Kenaz-Mara at 10:01 PM