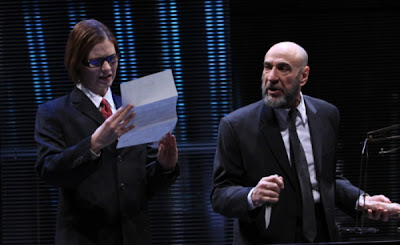 It's not too late to see The Merchant of Venice.   ChiIL Mama checked out opening night on the 15th and it was an absolute treat to see Oscar winner, F. Murray Abraham, in action as Shylock.   There were some compelling choices in costuming and set design which fused the old and new, to give this staging a contemporary look without sacrificing the flow and beauty of Shakespearean language.   Timeless themes of racism, greed, revenge, love, parental control and loss of control, lust and fidelity were all skillfully brought forth.
I spent intermission talking with an English teacher/mom who brought her two children (7 & 11) for their first taste of live Shakespeare.    The kids were hangin' in there, but The Merchant of Venice is conceptually a lot to handle (even for many of the so called "adults" in the audience).   It's not as accessible or kid friendly as A Midsummer Nights Dream or Macbeth, with bright costumes, sword fights, witches and mythical creatures.
I had debated bringing one or both of my kids, and narrowly decided not to.   Hers were so close in age to mine that I wanted to get their take on things.   Her 7 year old daughter was a bit bored and confused and basically said she was having trouble following the plot, which I think would have happened with my 2nd grade daughter, too.   Yuppies in suits and grown ups talking and talking are challenging to 7 year olds, even when they're speaking modern English.
Their 11 year old son was enjoying the hip hop, gangster archetype of Launcelot Gobbo, played by Jacob Ming-Trent.   He also liked the gold, silver and lead "caskets", set up as a test for Portia's suitors, which were reinvented as 3 silver Mac Book Pro Computers.   As each potential husband chose one, a large screen sprang to life on the wall with graphics and an ominous booming voice.
We had a great chat about introducing Shakespeare to kids through some fantastic children's books by Bruce Coville, including his version of A Midsummer Night's Dream.   He also includes Shakespearean themes and references without the language barrier, in his Magic Shop series.
I also highly recommended Chicago Shakespeare Theatre to them.   We just took both of our kids to see their Short Shakespeare production of Macbeth, and it was a hit with everyone.   They abridged it, for a shorter run time a fast pace, but did not compromise the original language or intent.    You can check out our review HERE.
This particular family spent 8 hours on Amtrak to spend spring break in Chicago, and were making the most of their theatre immersion vacation.   The day before, they'd been to Ethan Frome at Lookingglass Theatre.
My kids' first live Shakespeare was an outdoor production of A Midsummer Night's Dream, two years ago, which they adored.   Everyone sat outside on a grassy hill, and a friend of ours was in the cast.   We prepped by reading several kid friendly versions of the story before hand, so the kids knew the plot line and wouldn't be lost and frustrated.   That way they could ask questions during the books and not interrupt the play with loud protests of "I don't get it."   It was a pleasurable introduction where setting and the outrageous costumes made grasping the line by line dialogue less crucial.
Of course, every child matures with different timing and every parent has their own meter for what they are comfortable taking their kids to and what they think their children can handle.   Certainly there are great teachable moments in The Merchant of Venice about racism, classism, revenge, sexism, logic and wit.
Older children will also catch the hints of homosexuality, threats of infidelity and cross dressing.   They may get a kick out of learning that back in the playwright's day, all the actors were men, so the turnabouts  Shakespeare is renowned for were even more convoluted.   Shakespearean plays are full of men, playing women, pretending to dress as men.   I'd be less concerned, personally, with tweens or teens picking up on inappropriate innuendos and actions than with the difficult language factor.
It's a fine line between taking kids to things that they may not love, but that are educational for them, and boring them out of interest in things.   I'm all for not condescending or dumbing things down for kids.   It's a mind expanding experience for a child to see Oscar winning performers, while sitting in red velvet seats, among gold gilt trappings, even if some of the show goes over their heads.   I have absolute admiration for parents who want to bring the full experience of live theatre in an ornate downtown theatre to their children.
I've seen a number of "modernized" productions of various works by Shakespeare and some certainly work better than others.    I think this one's a bit challenging for younger children, but enjoyed it myself.   All of the actors were a pleasure to watch.   The set design and costume choices made classic characters intriguing and relevant, recast as today's power elite.   Check it out through March 27th.
Dates : March 15, 2011 - March 27, 2011
From the acclaimed Theatre for a New Audience, the first U.S. theatre to be invited to the Royal Shakespeare Company, comes Shakespeare's tragicomedy following command runs Off-Broadway and in Stratford-Upon-Avon. Starring Oscar winner F. Murray Abraham in his riveting portrayal of Shylock, and directed by Darko Tresnjak (former Artistic Director, Old Globe), the play has been arousing controversies for centuries with raucous and gentle comedy, tender poetry, and its struggle with mercy and justice. In this riveting update, religion, race and sexuality collide with love, family and justice and the currency of society and humanity has never been so changeable.
Ticket prices are $25 to $80.
GROUPS OF 15 OR MORE ON SALE NOW!
CALL (312) 977-1710
Posted by Bonnie Kenaz-Mara at 11:36 AM

Email ThisBlogThis!Share to TwitterShare to FacebookShare to Pinterest
Labels: Broadway in Chicago, Shakespeare