COMCAST GIVES VIEWERS FREE ACCESS TO THOUSANDS OF MOVIES AND SHOWS INCLUDING GAME OF THRONES, THIS IS US, BILLIONS AND THE HILLS 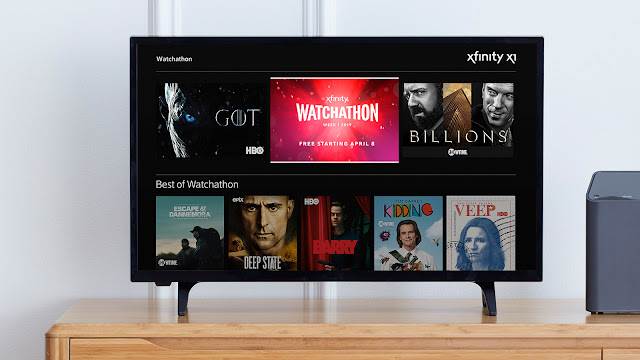 We've been in a quandary. We have been an Xfinity X1 family forever, but we let HBO lapse. But my husband and I have been eagerly awaiting the return of HBO’s Game of Thrones, and season eight premieres on April 14th! What's a GOT fan to do?! Thanks to Xfinity's Watchathon Week, we'll likely be binge watching all the past episodes again, re-upping HBO, and inviting the neighbors to a watch party. What's your plan?

Comcast recently announced that the seventh annual Xfinity Watchathon Week taking place from April 8 - 14 will offer thousands of free movies and shows including more than 200 complete series. Xfinity TV customers can watch any and every episode of HBO’s Game of Thrones leading up to the season eight premiere on April 14th plus catch up on other fan-favorite series such as A&E’s 60 Days In, Acorn TV’s Manhunt, EPIX’s Punk, HBO’s Veep, MTV’s The Hills, NBC’s This Is Us, and SHOWTIME®’s Billions from start to finish.

“Last year, our highest day of on demand viewing happened during Xfinity Watchathon Week and we are excited to once again offer this event to our customers with more great content to enjoy across networks, studios and streaming partners,” said Daniel Spinosa, Vice President, Video Entertainment Services, Comcast Cable. “As we continue to bring more of the entertainment our customers love to Xfinity TV platforms including X1, Watchathon Week is more exciting every year for both our customers and partners and its continued success is a testament to X1’s ability to make search and discovery of content fast and easy—all customers have to do is get to watching.”

This year, customers tuning in on X1 can make their Watchathon experience better than ever by:

Turning on the “auto play” functionality within Comcast Labs to automatically start the next episode of a series once the former one ends
Saying the voice command “Xfinity Home Watchathon” to prep the room for a viewing session by dimming all connected lights and locking connected doors if they have an Xfinity Home subscription and compatible devices
Saying “Watchathon” to explore a personalized curated destination highlighting content recommended just for them throughout the week
Picking up where they left off on a show or movie more quickly by saying “Continue watching Billions”
Rewatching the most memorable moments from a series by saying for example, “Show me the episode of Curb Your Enthusiasm about Namaste”

Get in on buzzworthy shows such as Bravo’s Southern Charm, EPIX’s Deep State, HBO’s Big Little Lies and Deadwood, TBS’s Search Party and from SHOWTIME Ray Donovan and The Affair by watching the full series before they return to TV

Catch up on popular movies across genres such as Deadpool 2, Jurassic World Fallen Kingdom, and Mamma Mia Here We Go Again on HBO; A Quiet Place and Spy Who Dumped Me on EPIX; and I Feel Pretty and The Dark Tower on SHOWTIME

Explore almost two dozen SVODs - no sign in required- including world class mysteries, dramas, and comedies from Britain and beyond from Acorn TV; award-winning documentaries from CuriosityStream on science, history, wildlife, adventure, travel and more; Lifetime movie favorites of all genres from Lifetime Movie Club; PlayKids’s cartoons, games, books, and activities for kids aged two to eight; Stingray Qello’s full-length concerts and music documentaries; and True Royalty’s original shows and documentaries about the British Royal Family and monarchies around the world

For more information on Watchathon Week, visit https://watchathon.xfinity.com/ or join the conversation on Twitter and Instagram by using #XfinityWatchathon and following @Xfinity.

Posted by Bonnie Kenaz-Mara at 6:17 PM