The iconic Big Top will be raised for the first time at brand new location: Soldier Field! The name VOLTA refers to a sudden about-face, a change in emotion or idea often used in poetry. It also speaks to the jolt of energy delivered through the show.


Cirque du Soleil is excited to add two weeks of performances of VOLTA’s Chicago engagement this spring. The show will be presented under its signature Big Top at the Soldier Field South Lot, 1410 Museum Campus Drive, Chicago, May 18 – July 6, 2019. Tickets, starting at $49, are available for purchase by visiting cirquedusoleil.com/volta or calling 1-877-9CIRQUE (1-877-924-7783).


ChiIL Mama will be ChiILin' in Chi, IL with Cirque du Soleil's VOLTA at the press opening, May 21st. Check back soon for my photo filled recap and review.

The show
Energetic, urban and contemporary, VOLTA is a captivating voyage of discovery that showcases never-before-seen under the Big Top acrobatics in a visually striking world. Driven by a stirring melodic score and inspired in part by the adventurous spirit that fuels the culture of street sports, VOLTA is a story of transformation. It is about being true to oneself, fulfilling one’s true potential, and recognizing one’s own power to make it possible. Ultimate freedom comes with self-acceptance, and with the liberation of the judgment of others.

BMX & Street Sports
The creators of VOLTA drew inspiration from the spirit of adventure that pervades the world of BMX, street sports and acrobatics. Whether they are on a bike, hopping from rooftop to rooftop, or double dutch rope skipping, urban sports enthusiasts constantly challenge themselves and defy convention. 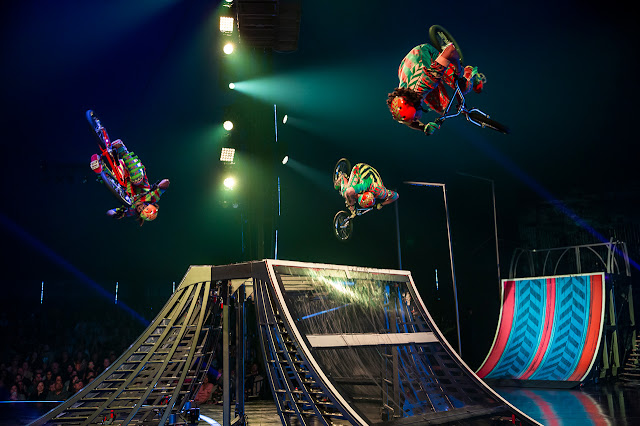 
Sure to be a Chicago crowd pleaser, VOLTA features a full-blown BMX park mounted on stage in front of the audience’s very eyes for the breathtaking BMX finale as riders invade the stage to deliver a jaw-dropping, fast and furious performance of nonstop acrobatics on wheels. The riders go up the jump boxes and perform air tricks before landing and leaping off the ramps again, crisscrossing and spinning their bikes in midair in a spirit of brotherhood. 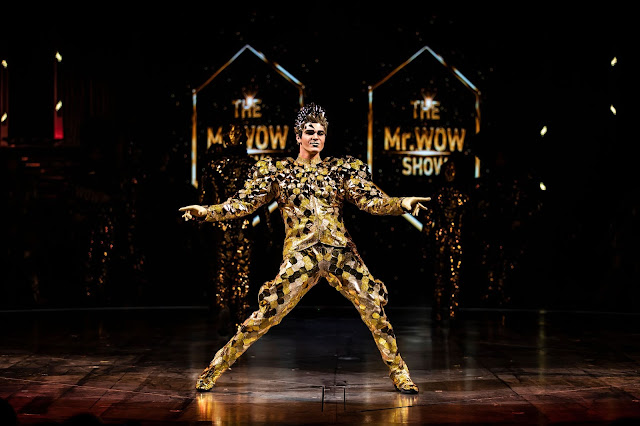 
The Costumes
The stunning costumes of VOLTA have been designed by Zaldy Goco, famous for his work with Lady Gaga, Michael Jackson, Britney Spears, Gwen Stefany and for TV show RuPaul’s Drag Race. 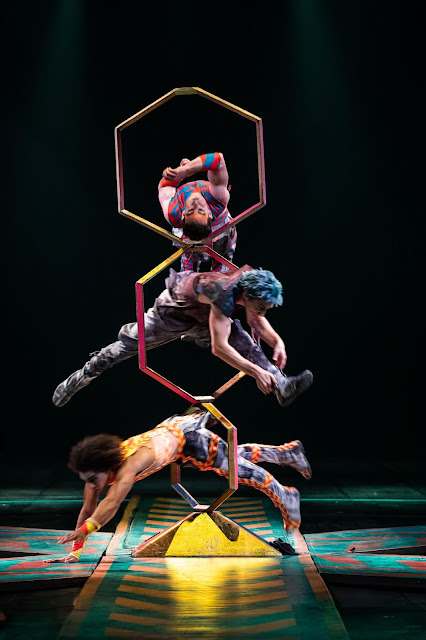 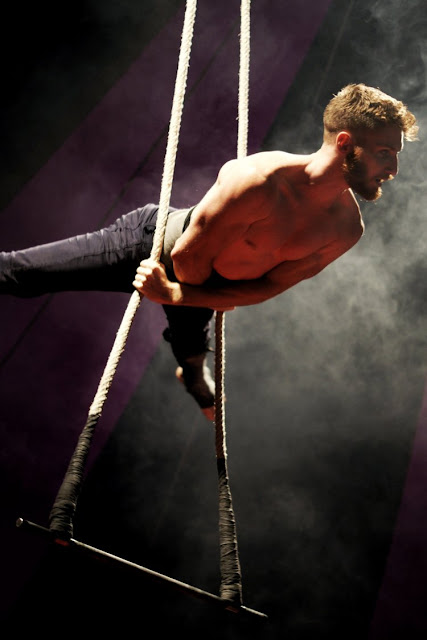 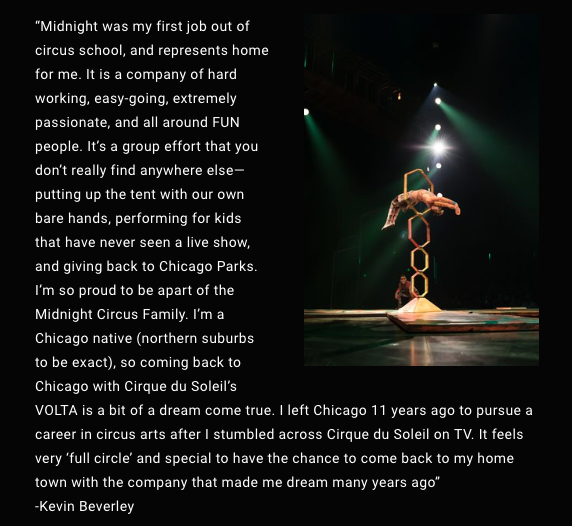 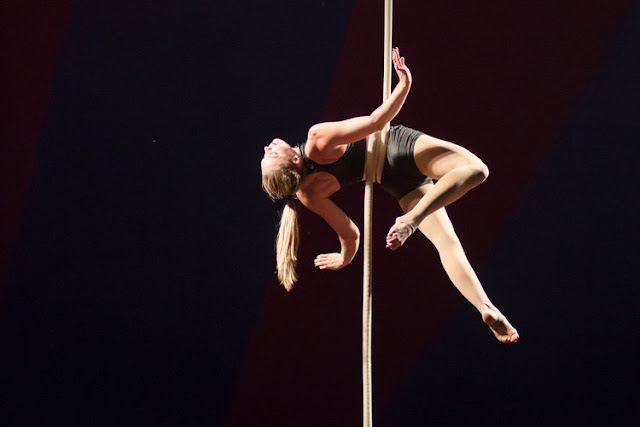 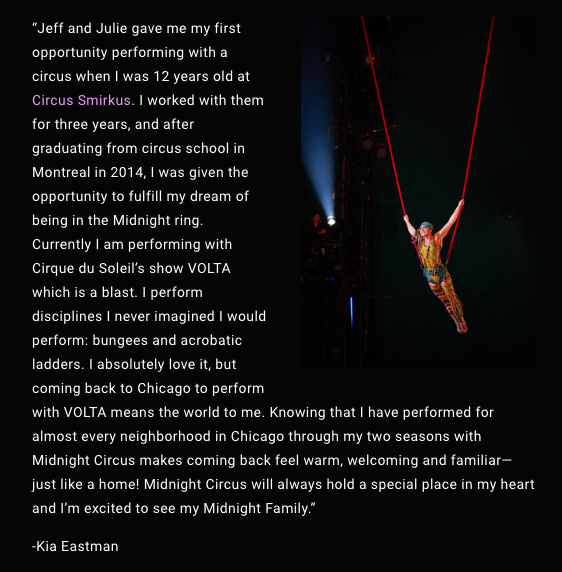 Ticket Information
VOLTA will be presented under the Big Top at the Soldier Field South Lot, 1410 Museum Campus Drive, Chicago, starting May 18. Tickets can be purchased online at www.cirquedusoleil.com/volta. Discover our VIP package – a cocktail reception with open bar and hors d’ oeuvres inspired by the show, access to the best seats for greater comfort, complimentary parking and more! 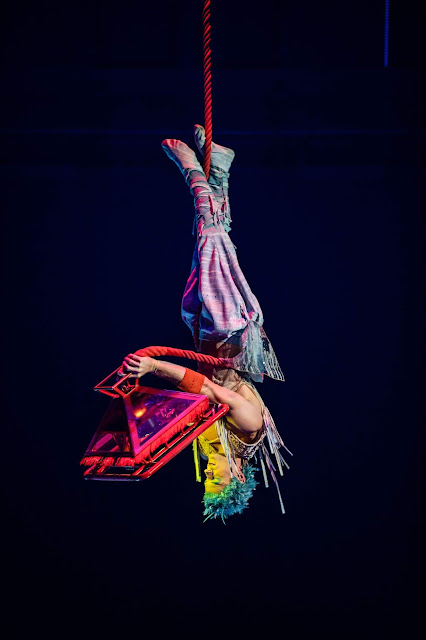 
Cirque du Soleil
VOLTA is Cirque du Soleil’s 41st original production since 1984, and its 18th show presented under the Big Top. The company has brought wonder and delight to more than 190 million spectators in more than 450 cities on six continents. Cirque du Soleil Entertainment Group has close to 4,000 employees, including 1,400 performing artists from close to 60 different countries.
For more information about Cirque du Soleil, visit cirquedusoleil.com. 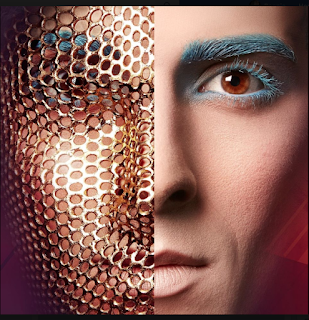 Posted by Bonnie Kenaz-Mara at 4:07 PM