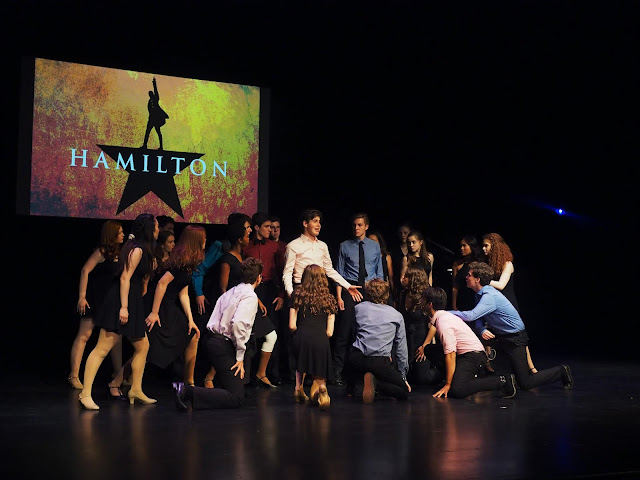 Broadway In Chicago is delighted to announce the twenty-four students nominated for Best Actor and Best Actress, and nominees for Best Production presented by Guardian Music Travel, Best Direction, Best Scenic Design presented by SPL, Best Choreography, and Best Ensemble for the eighth annual Illinois High School Musical Theatre Awards (IHSMTA). The nominees (12 young actors and 12 young actresses), selected after evaluating 72 productions and over 275 student applicants across the state of Illinois, have been invited to participate in the Awards program, which will be held at the Broadway Playhouse at Water Tower Place (175 E. Chestnut) on Monday, May 6, 2019 at 6:30PM and hosted by NBC 5 entertainment reporter LeeAnn Trotter. Sponsored by NBC 5, the Illinois chapter of The Jimmy Awards® (National High School Musical Theatre Awards) serves as an annual national celebration of outstanding achievement in musical theater performance by high school students.

Broadway In Chicago has crafted a workshop led by CHICAGO THE MUSICAL cast member Christophe Caballero (Dance Captain/Swing), whose previous theatrical credits include four Broadway shows including original Tony®-winning companies of La Cage Aux Folles & Jerome Robbins' Broadway. He performed at the Tony Awards® during each of the last three decades. CHICAGO THE MUSICAL will play at Broadway In Chicago’s Cadillac Palace Theatre (151 W. Randolph) from May 7-12, 2019.

The workshop for these twenty-four nominees will culminate in a performance onstage at the Broadway Playhouse at Water Tower Place. During the day, nominees will perform for a panel of casting agents and theatre professionals who will choose the recipients of performance awards. A Best Actress and Best Actor winner from Illinois will be sent to New York City, on an all-expense paid trip, for a week-long theatre intensive of coaching and rehearsals with industry professionals in preparation for a one-night-only showcase, where they will represent the state of Illinois at The Jimmy Awards® on Broadway.

In addition to the workshop, all 24 nominated students in the program will receive tickets to CHICAGO THE MUSICAL.


ABOUT THE JIMMY AWARDS®
The Jimmy Awards®/The National High School Musical Theatre Awards® (NHSMTA®) program impacts more than 100,000 students who participate in high school musical theatre competitions sponsored by presenters of Touring Broadway productions throughout the United States. Presented by the Broadway League Foundation, the program sends a Best Actress and Best Actor winner from each of these competitions to New York for a week-long theatre intensive of coaching and rehearsals with industry professionals in preparation for a one-night-only talent showcase on Broadway. Named for Broadway impresario James M. Nederlander, the program has been the catalyst for more than $2,000,000 in educational scholarships. The eleventh annual Jimmy Awards® will take place on Monday, June 24, 2019 at the Minskoff Theatre on Broadway. Coaching and rehearsals for this one-of-a-kind event will be held Monday, June 17, 2019 through Monday, June 24, 2019 in New York City. For more information, please visit www.JimmyAwards.com.

ABOUT OUR SPONSORS
NBC 5 CHICAGO
NBC 5 (WMAQ-TV) is the owned NBC station in Chicago. Originally WNBQ, the station’s current call letters, WMAQ-TV, were established in 1964. During NBC 5 Chicago’s rich history, the station pioneered a number of television “firsts.” On April 15, 1956, NBC 5 became the world’s first all-color TV station. In September of 1986, NBC 5 became the first Chicago commercial station to broadcast in stereo. In 1989, NBC 5 was the first Chicago station to present closed captioning of all local newscasts. Currently, NBC 5 airs over 37 hours of local news per week in HD on its core channel and the latest news, weather and streamed original content on NBCCHICAGO.COM and the NBC Chicago Mobile App.

The host of the eighth annual Illinois High School Musical Theatre Awards, LeeAnn Trotter, is NBC 5's entertainment reporter, covering everything from restaurants to celebrities to what's happening around town. She also contributes regular "Making a Difference" segments. This Chicago native joined NBC 5 in December 2005, after working at CLTV for eight years. There, she anchored the weekend news and hosted the award-winning entertainment show, "Metromix: The TV Show," which earned her a local Emmy and several nominations for Best On Camera Performance. Prior to working at CLTV, she was the News and Public Affairs Director at WUSN-FM, where she reported news on the morning show and hosted, "Chicago Up Close," a weekly public affairs show.  She also worked at FOX News, WGN Radio and WBBM Newsradio.

CHICAGO THE MUSICAL is the #1 Longest Running American Musical and the winner of six 1997 Tony Awards®, including Best Musical Revival, and the Grammy Award® for Best Musical Cast Recording. Set amidst the razzle-dazzle decadence of the 1920s, CHICAGO THE MUSICAL is the story of Roxie Hart, a housewife and nightclub dancer who murders her on-the-side lover after he threatens to walk out on her. Desperate to avoid conviction, she dupes the public, the media and her rival cellmate, Velma Kelly, by hiring Chicago’s slickest criminal lawyer to transform her malicious crime into a barrage of sensational headlines, the likes of which might just as easily be ripped from today’s tabloids. CHICAGO THE MUSICAL will play the Cadillac Palace Theatre May 7-12 starring NFL Legend and Heisman Trophy winner Eddie George as “Billy Flynn,” following a successful limited engagement in the same role on Broadway in 2016.

GUARDIAN MUSIC TRAVEL
Guardian Music Travel is a company that specializes in student group travel across the United States and abroad. This educator founded and operated company provides the finest service in the industry at the best price.  The company has thrived using its model of teachers working with the Guardian staff of educators to create custom itineraries and wonderful educational experiences.  Guardian’s theatre groups have loved the New York City packages including Broadway shows and workshops with professional and teachers. For more information, visit www.gmgtravel.com.

SOUND, PRODUCTION & LIGHTING
Sound, Production & Lighting (SPL) is a full-service event production and system installation company.  We provide production services for corporate meetings, galas and fundraising parties, marketing activations, and anything between - we're always up for a challenge. We offer permanent installation services for a variety of venues in fields such as live performance, education, worship, and hospitality. Our goal for any project is to provide an unparalleled experience and service. https://www.splchicago.com/