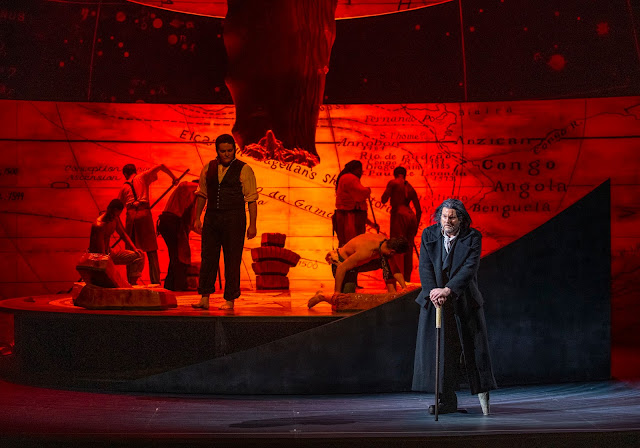 Photo Credit for all: Michael Brosilow

“Call me Ishmael.” As a grad student, those familiar words once filled me with dread, but now I am amused. 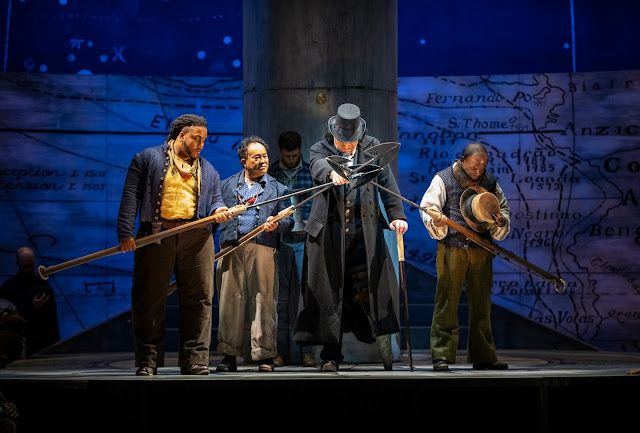 As Mark Twain noted, a “classic” is “something that everybody wants to have read and nobody wants to read.” Sums up my relationship with the 585-page tome. I can brag that I did actually read the entire novel, since it was required, while at Miami University. My father is the only person I know who read Moby Dick for fun. He was kind of an intellectual lunatic…

A common understanding when lovers of literature see a movie-based-on-a-book is,”The book was so much better.” For Moby Dick, the opera is sooooo much better! 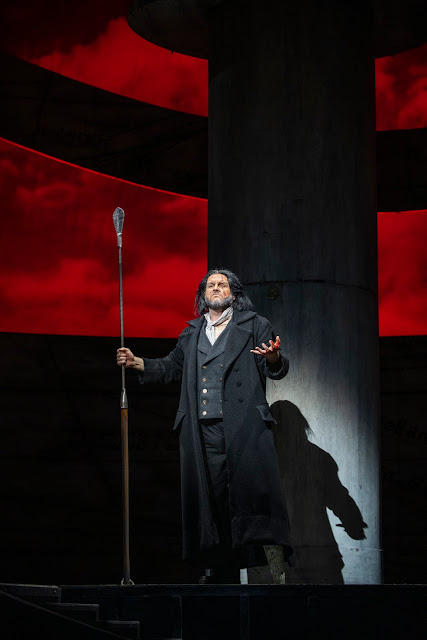 Chicago audiences have one more opportunity to catch the Great White Whale (catchy, huh?) on Sunday April 28 at 3:00 at the Harris Theater on the edge of Millennium Park. It is a shame that COT does not offer more showings to give Chicagoans a longer opportunity to land this giant fish tale (and yes, I acknowledge that a whale is a mammal, not a fish...) 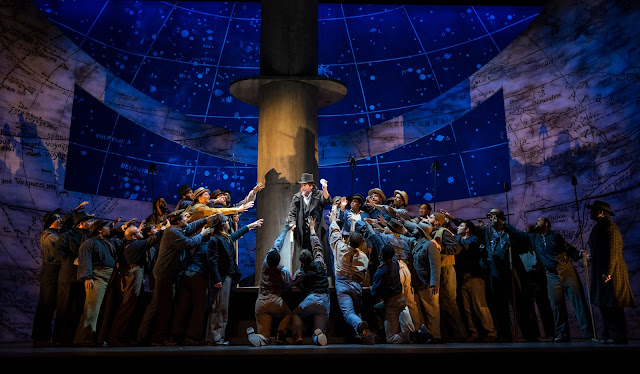 Chicago Opera Theater continues to impress with their season of non-standard performances. If you have had season tickets at Lyric and wonder why you must endure yet another damn Wagner marathon, please give Chicago Opera Theater a chance. They are doing exciting, unusual musical productions that you haven’t seen before. Moby Dick continues COT’s style of presenting a Chicago premiere. From their press release, “Jake Heggie and Gene Scheer’s grand American epic arrives in Chicago on the heels of critically acclaimed performances in Utah, Pittsburgh, and San Jose. Based on Herman Melville’s magnum opus, the opera brings the perilous adventures of the Pequod to the stage. Captain Ahab gathers a crew on his quest for revenge on the legendary whale that cost him a leg.” 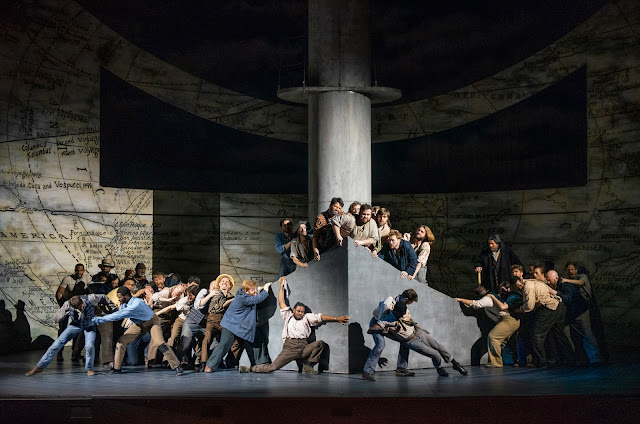 Captain Ahab’s peg leg costume is ingenious; we both did double takes, wondering how that clever visual trickery was maneuvered. At Richard Cox’s curtain call, the fake leg had been removed, and he bemusedly tapped his normal leg. It was a lovely moment of levity after an intense performance. 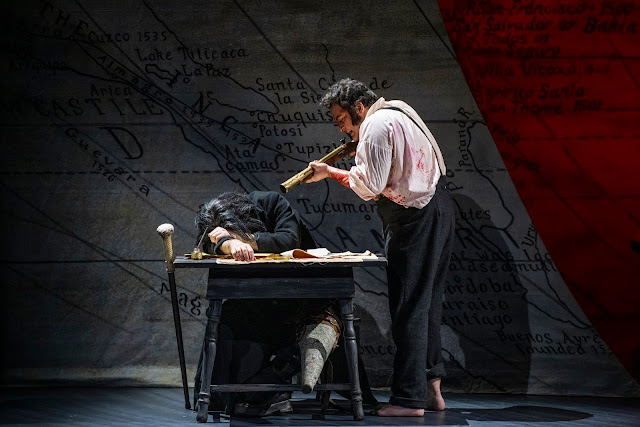 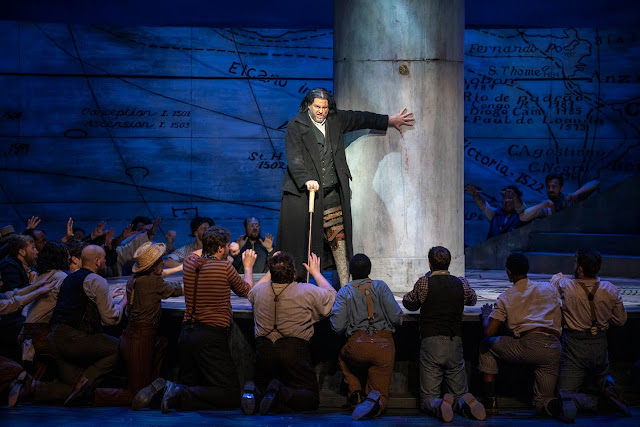 The set seemed promising, especially the map projected on the walls. The back walls open up like a giant window for us to see sailors on the deck and the stars. But my daughter pointed out that we could not see the singers on the mast from our angle in the balcony, “just singing legs,” which was frustrating. I had also hoped for an impressive sighting of the great white whale through those windows to convey the massive size of the beast, but was kind of disappointed by the lackluster reveal when M.D. is finally sighted. The costumes, by Jessica Jahn, are terrific, and the men’s chorus is truly one of the highlights of the show. Their offstage singing is simply gorgeous. 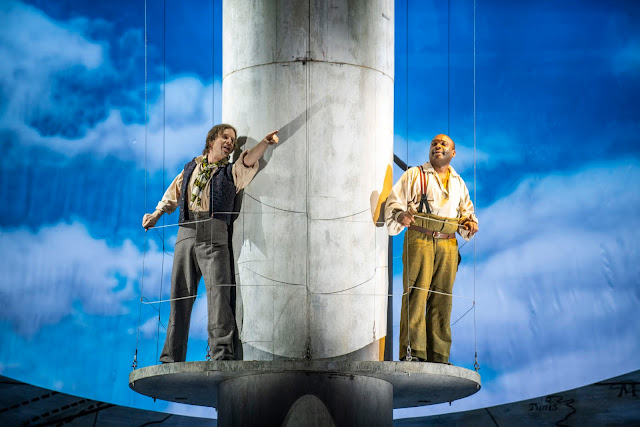 Also of special note is Baritone Andrew Bidlack as Greenhorn. He and Starbuck, played by Aleksey Bogdanov, possess beautiful voices and stage presences. First Mate Starbuck sings longingly for his wife and son back home, which is a tender moment against the lonely backdrop of the sea. Starbuck has a very revealing scene with the maniacal Ahab; he is the only crew member with the courage to contradict their obsessed boss and encourage him to turn the Pequod back to port. For his level-headedness, Ahab threatens to kill Starbuck, showing the single-mindedness of Ahab “going after that stupid whale.” (teen girl comment)  Starbuck, fearfully, sings,”Now all of us are Ahabs.”

This voyage will not end well. 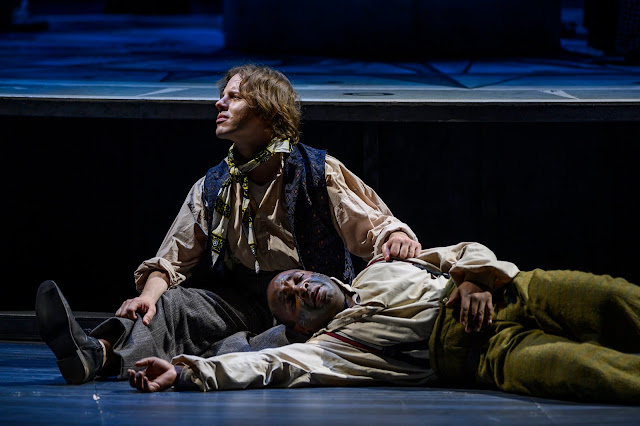 If you’d like to know more about the industry of whaling and the real-life inspiration for Moby Dick, I highly recommend In the Heart of the Sea: The Tragedy of the Whaleship Essex by Nathaniel Philbrick. It reads like a novel and offers a fascinating history lesson about Nantucket, the tenacity of sailors, and the importance of whaling in the 1800’s. The book is classic, but not a classic, for it is one you will enjoy reading.

Catherine Hellmann grew up in Cincinnati when Jerry Springer was the mayor, which probably skewed her view of life. Chicago theaters and Wrigley Field are her happy places. 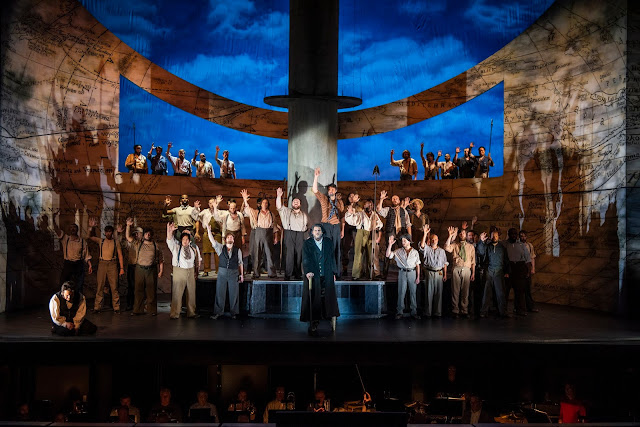 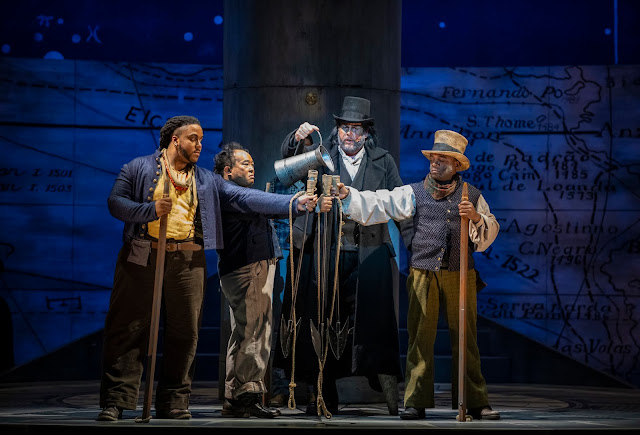 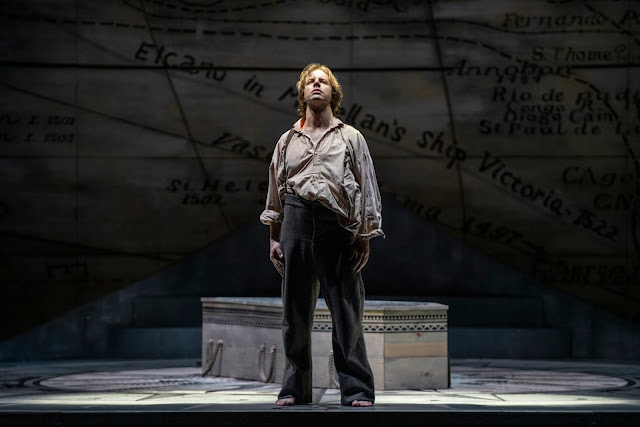 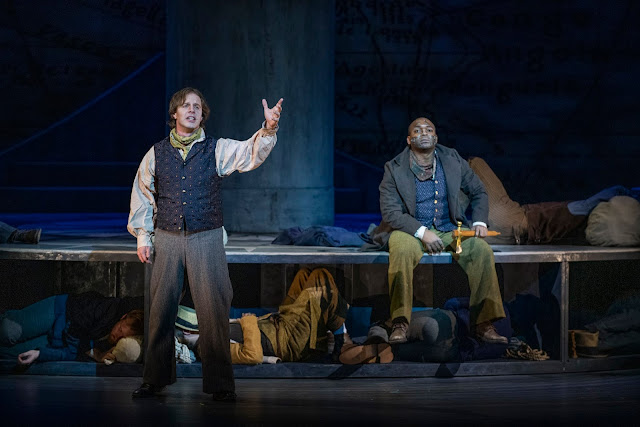 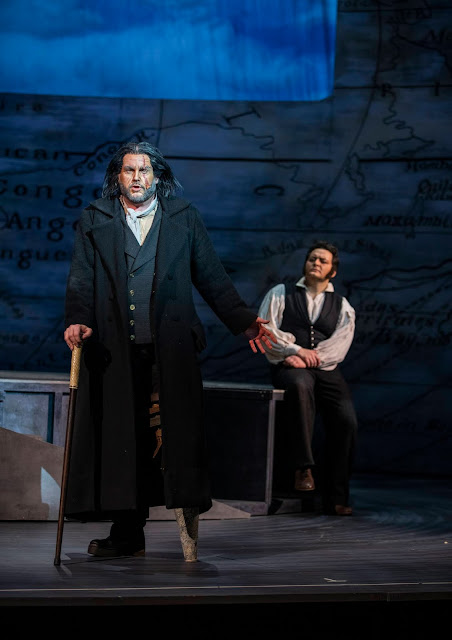 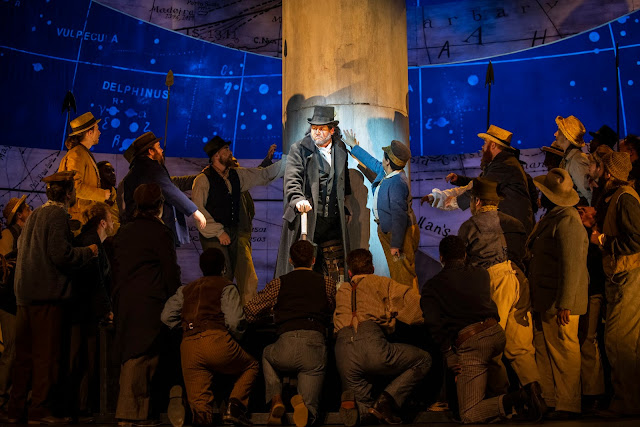 Posted by Bonnie Kenaz-Mara at 8:02 AM