Comic and poignant, Non-Player Character is a timely, boldly theatrical exploration of the games we play and who’s winning. With themes of “Gamer Gate” aspiring video game designer Katja and her longtime friend Trent are an unstoppable team against animated monsters in the virtual worlds. But after a humiliating falling-out, Trent marshals an army of internet trolls to wage real-life war against his former friend.


TICKETS, DATES & INFORMATION
Non-Player Character runs Thursdays through Saturdays at 7:30 pm and Sundays at 3:00 pm from April 20th through May 18th. Tickets are available at redtheater.org 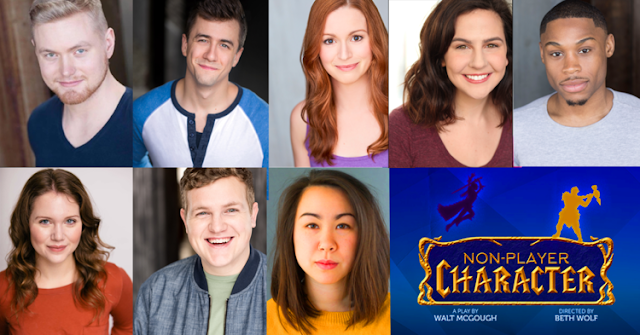 THE PEOPLE
Walt McGough (Playwright) is a Boston-based playwright (by way of Pittsburgh and Chicago). In Boston, he has held fellowships with both the Huntington and New Repertory Theatre Companies, and was a finalist for the 2016 Dramatists Guild Lanford Wilson Award. His plays include Pattern of Life, which was named Best New Play by the Independent Reviewers of New England, and The Farm, Priscilla Dreams The Answer, and Paper City Phoenix, all of which received Best New Play IRNE nominations. Other plays include Chalk, Dante Dies!! (And Then Things Get Weird), The Haberdasher!, and Non-Player Character. He has worked around the country with companies such as The Lark, the Huntington, New Rep, the Kennedy Center, NNPN, Boston Playwrights Theatre, Fresh Ink, Sideshow, Orfeo Group, Nu Sass Productions, Chicago Dramatists, and Argos. In 2015, his play Advice for Astronauts was selected as the winner of the Milken Playwriting Prize. He has served on the staff at SpeakEasy Stage Company in Boston and Chicago Dramatists, and is a founding ensemble member of Chicago’s Sideshow Theatre Company. He holds a BA from the University of Virginia, and an MFA in playwriting from Boston University.

Beth Wolf (Director) is the founder and Producing Artistic Director of Midsommer Flight. Beth’s directing credits include As You Like It, Twelfth Night, Macbeth, Much Ado About Nothing, Romeo and Juliet and A Midsummer Night’s Dream with Midsommer Flight; LIAR!, which won first place in the 2012 City Lit Art of Adaptation Festival; Rosencrantz & Guildenstern are Dead, Black Magic: An Evening of Shakespeare, Seascape with Sharks and Dancer, Bury the Dead, The Fantasticks, and Shakespeare in the Garden (Promethean Theatre Ensemble). Additionally, she has directed for festivals, staged readings, and assistant directed with companies all around Chicago, including Remy Bumppo, the side project, City Lit Theater, Polarity Ensemble Theatre, and more. Beth is also a co-founder and the former Artistic Director of Promethean Theatre Ensemble. She is a proud Northwestern University graduate with a double major in theatre and gender studies.

Red Theater Chicago, now in its 7th Season, is committed to honoring all audiences by asking dangerous questions through accessible performances that broaden perspectives and inspire dialogue.