Win Free Tickets to Primus This Friday-ChiIL Mama's Got 4 Pairs! 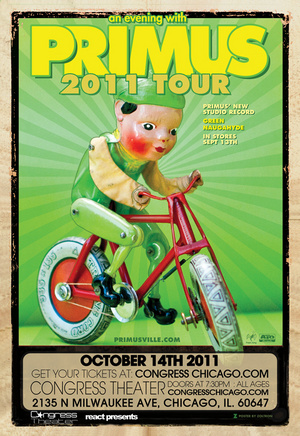 Spend your Friday with the inimitable Les Claypool and Primus!   You've gotta love a band full of consummate musicians with a sense of humor.    Case in point...They have released some of their records on Claypool's Prawn Song Records label, the title of which is a parody of Led Zeppelin's Swan Song label.


With their witty irreverence, these are serious musicians who make for a seriously fun and funny show.   We've seen Primus (and Les Claypool in many other configurations) for years, and they do not disappoint.

This show is all ages, so bring your punk kin and further their rock education, or make it a night out.

We'll be giving away 4 pairs of tickets this Friday at noon.   Winners names will be on the guest list at the door.   Valid ID required.   Enter at the bottom of this post for your chance to win.   We never share, sell, spam or post contact info on bathroom walls.   Only the winners' first name and last initial will be published.

An Evening with Primus 2011 Tour


Primus is an American rock band formed in 1984, currently composed of guitarist Larry "Ler" LaLonde, vocalist and bassist Les Claypool, and drummer Jay Lane. Primus originally formed with Claypool, Todd Huth and Lane, with the latter two departing the band before Primus's debut release Suck on This, being replaced by drummer Tim "Herb" Alexander and Larry LaLonde.
During this lineup, the band released four studio albums: Frizzle Fry, featuring "John the Fisherman", Sailing the Seas of Cheese, featuring "Jerry Was a Race Car Driver" and "Tommy the Cat", Pork Soda featuring "My Name Is Mud" and Tales from the Punchbowl, featuring their most commercially successful single, "Wynona's Big Brown Beaver". In 1996, Alexander left Primus and was replaced by Bryan "Brain" Mantia, with whom they would later release Brown Album and Antipop before placing Primus on hiatus in 2000. They were also known for creating the original theme for "South Park" in 1997.
In 2003, Claypool and LaLonde reunited with Tim Alexander and released a DVD/EP, Animals Should Not Try to Act Like People, before touring from 2003 through 2004. In 2010, it was announced that one of the band's earliest drummers Jay Lane had rejoined the band for a cross-country tour, and they later digitally released the free June 2010 Rehearsal EP. An eighth album, titled Green Naugahyde was just released.