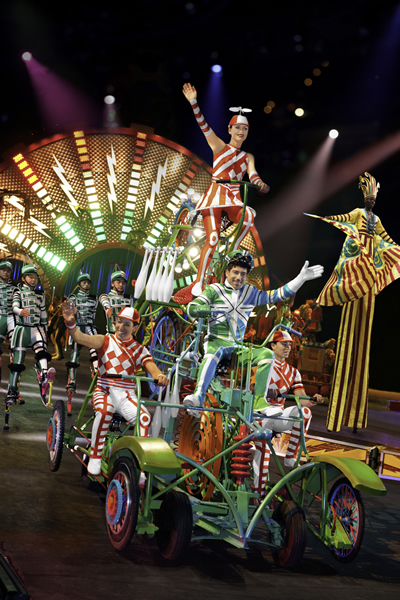 We're so charged up about Fully Charged.   Both of my kids have studied circus arts with CircEsteem for a year and a half and rock acro, tight wire, clowning, and juggling.    They even have the opportunity to learn unicycle, stilts and gym wheel!
We also promote circus arts in Chi-Town year round, and make sure our readers have the heads up when current circus shows, classes, movies and related events are going down.   This time the big boys are back in town for November, bringing circus arts to the biggest big tops out there--Allstate Arena and United Center!   We'll be there opening night, November 3rd, with a photo filled feature to follow, but there's no substitute for being there.   You've got to experience all the high flyin', pulse racing excitement firsthand. 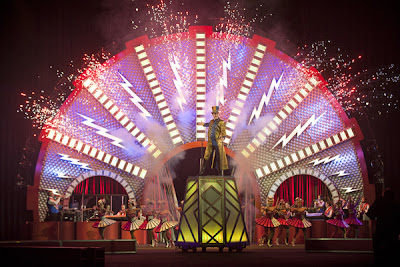 Don't miss Fully Charged, the all-new surge of circus entertainment from Ringling Bros. and Barnum & Bailey® where megawatts of thrills explode off of the arena floor with breathtaking dare-devilry, superhuman stunts and never-before-seen performances that energize Children of All Ages!

The most electrifying edition ever of Ringling Bros.® celebrates performance power that boosts circus-goers excitement. The amazing acts, which can only be seen at The Greatest Show On Earth®, include Tabayara, a dynamic animal trainer whose rare ability to communicate with animals allows him to ride rearing stallions at a fully charged gallop and orchestrate majestic four-ton Asian Elephants in a symphony of dance. When he stands inside a cage, eye to eye with twelve ferocious tigers, Tabayara sees family where others see danger.

Audiences will feel the earth shake when the Ukrainian strongman duo of Dmitry Nadolinkskiy and Ruslan Gilmulin, who are as wide as they are tall, enter the arena. The brawny twosome give the word manpower a whole new meaning as they lift large cumbersome telephone poles, which weigh up to half-a-ton, and twirl them above their heads while acrobats balance atop.


The Fearless Fernandez Brothers dial up the thrills as they perform daring feats of athleticism on the Twin Turbines of Steel, including, extreme jumps and twists inside the moving wheels! Audiences will crackle with excitement as they watch Guillermo perform a three hundred sixty degree flying forward somersault, three stories in air, a feat so difficult it has only been attempted by one other person in the 141-year history of Ringling Bros.

The Human Fuse, Brian Miser, sets the arena sky ablaze as he rockets through the air from his self-made human crossbow. Don't blink as he flashes across the sky in less than a second, and travels 80 feet at 65 miles per hour.
Ever wonder how many clowns it takes to change a light bulb? The hilarious hoopla continues to flow as the clowns from the world-famous Ringling Bros.® clown-alley, charge-up the audiences' funny bones with hysterical silly antics and clownish comedy.

You can only experience this current of excitement at Ringling Bros. Fully Charged! Get your ticket for high-voltage fun today!
ChiIL Mama will be giving away 4 free tickets this coming Free Ticket Tuesday.   Enter through midnight 10-24.    Enter at the bottom of this post for your chance to win!
Our readers also get a special discount code:
Type in the code MOM when you go to this Ticketmaster page to purchase seats for Fully Charged -- and get 4 weekday performance tickets for $44 or save $4 on all weekend tickets! 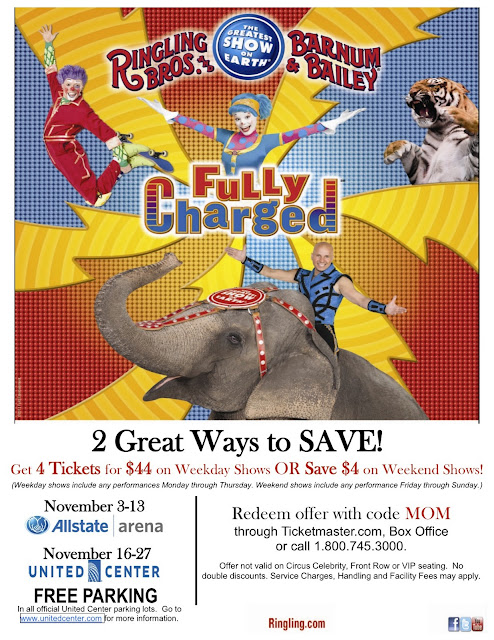