ChiIL Live Shows on our radar
Best for Winter,
being a short Shakespeare adapted from The Winter’s Tale and other works


AT THE EDGE THEATER OFF-BROADWAY 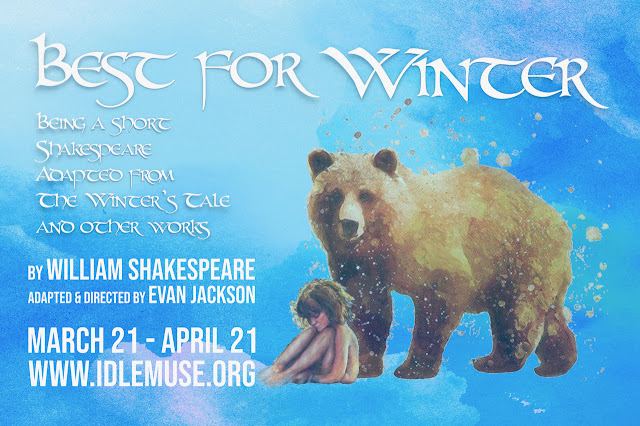 William Shakespeare’s The Winter’s Tale is Adapted and Directed by Evan Jackson in this Tale of Laughter, Survival, Transformation and What it Means to be Alive Right Now

One of my favorite aspects of Chicago is how a little storefront can be modestly hiding a theatrical treasure. Such is the case with this little gem in The Edge Theater Off-Broadway, a new space at 1133 W. Catalpa Ave. in Edgebrook. Idle Muse Theatre Company proudly performs its first play of 2019, Best for Winter, being a short Shakespeare adapted from The Winter’s Tale and other works, adapted and directed by Evan Jackson. Described as a: “Tale of Laughter, Survival, Transformation and What it Means to be Alive Right Now.”

One of Shakespeare’s “problem plays” (Is it a comedy? Is it a tragedy?) receives a fresh overview by the Idle Muse Theater Company in this abridged version. The play begins on a rather simple raised set with an overarching tree. King of Bohemia, Polixenes, played by Erik Schnitger, has been visiting his childhood friend, the King of Sicilia, Leontes, ably played by Brian Bengtson. Queen Hermione is radiantly pregnant with her husband Leontes’ child...or is she?? 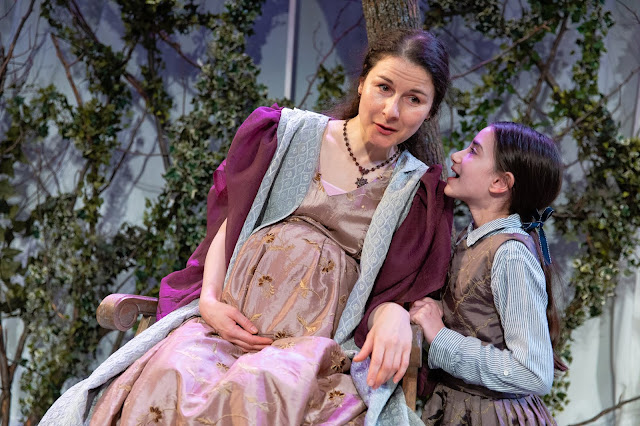 (L to R) Mara Kovacevic* as Hermione and Paula Hlava as Mamillias in BEST FOR WINTER, BEING A SHORT SHAKESPEARE ADAPTED FROM THE WINTERS TALE AND OTHER WORKS from Idle Muse Theatre Company
All Photos by Steven Townshend

Mara Kovacevic is lovely as the expectant queen. She looks sweetly at her husband and all seems well...until she seems too friendly with their houseguest, causing a jealous outburst from Leontes, who convinces himself that the anticipated child belongs to his best friend, not his own offspring. 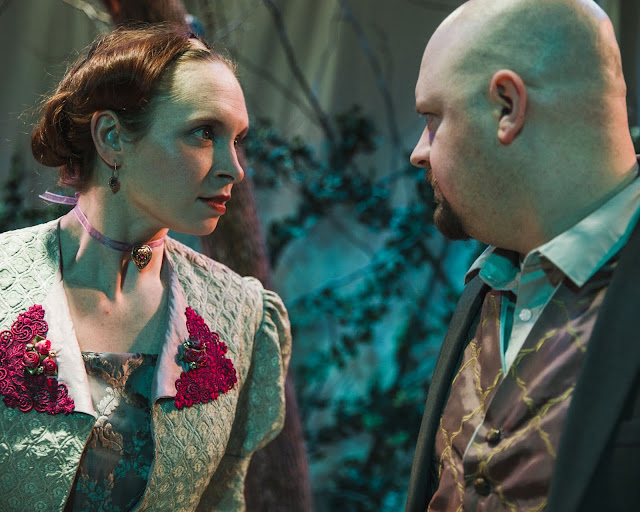 Because of Leontes’ overactive imagination, all hell breaks loose. The enraged king tries to persuade his most trusted servant, Camillo, to kill Polixenes. Convinced the queen is innocent, Camillo warns Polixenes, and they depart for Bohemia together. Meanwhile, Leontes has his pregnant queen thrown into jail, where she gives birth to their daughter.

The child is abandoned on the coast of Bohemia, where she is found as raised by a shepherd; he names her Perdita. After intermission, we jump 16 years ahead. Perdita is now as lovely as her dear mother. She is being courted by the son of Polixenes, Prince Florizel, in disguise (of course!), as a shepherd. And to reveal any more would not be fair...let’s just say All’s Well That Ends Well. 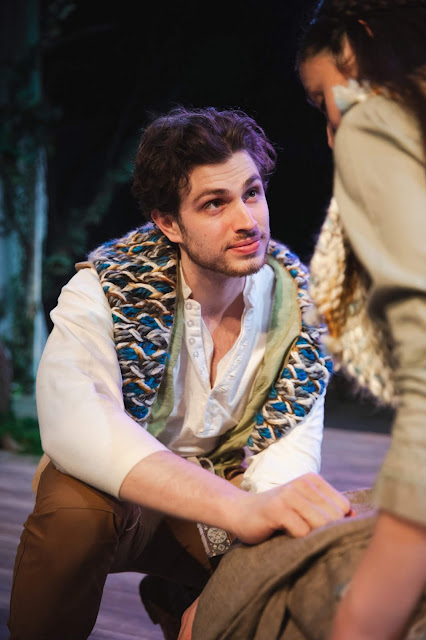 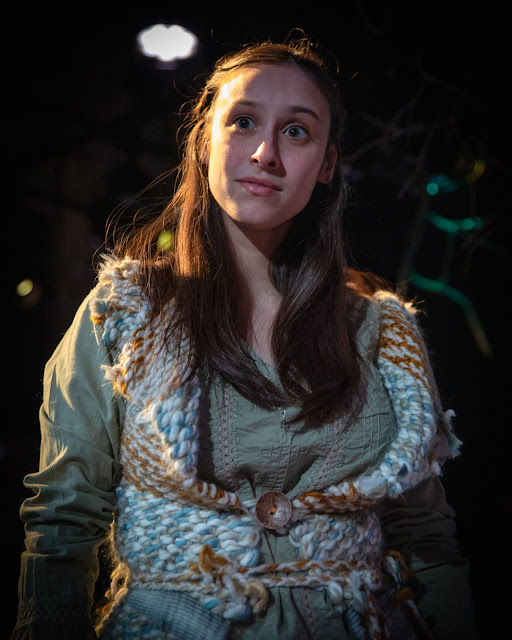 The young lovers are played by Kristen Alesia and Brian Healy, who are charming. Also deserving special recognition is Laura Jones Macknin as Camilla. 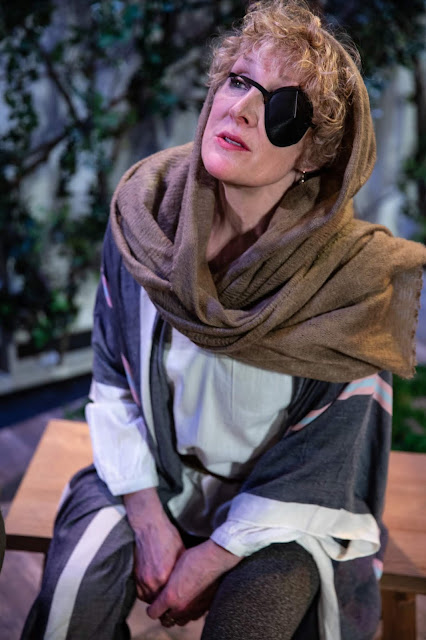 This energetic, earnest cast obviously has great joy for what they are performing. I hope their audience finds them in this little theater.

And on that note, I will end with the famous and curious stage directions from A Winter’s Tale: “Exeunt, pursued by a bear…”


Catherine Hellmann really loves theater and her kids...her son's Quiz Bowl team once had "Exeunt, pursued by a bear" made into pins because they loved the obscurity of the only stage directions given by the Bard. 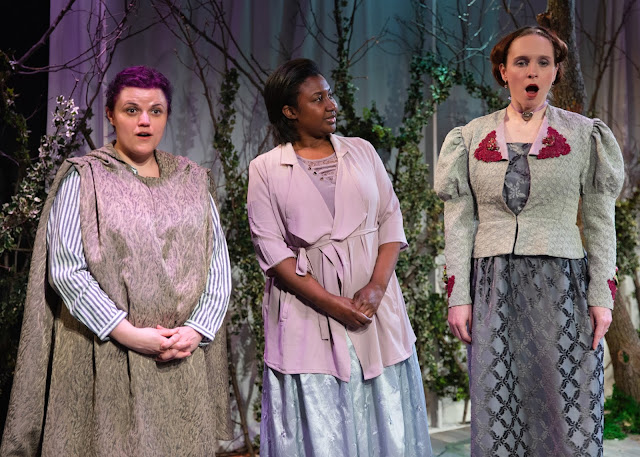 More About BEST FOR WINTER:

Idle Muse Theatre Company proudly announces its first play of 2019, Best for Winter, being a short Shakespeare adapted from The Winter’s Tale and other works, adapted and directed by Evan Jackson, March 21 – April 20, at The Edge Theater Off-Broadway, a new space at 1133 W. Catalpa Ave. Previews are Thursday, March 21 and Friday, March 22 at 8 p.m. Opening night is Saturday, March 23 at 8 p.m. The performance schedule is Thursdays – Saturdays at 8 p.m. and Sundays at 3 p.m. with an added performance Wednesday, March 27 at 8 p.m. Industry nights are every Thursday performance with tickets for industry professionals at $10. 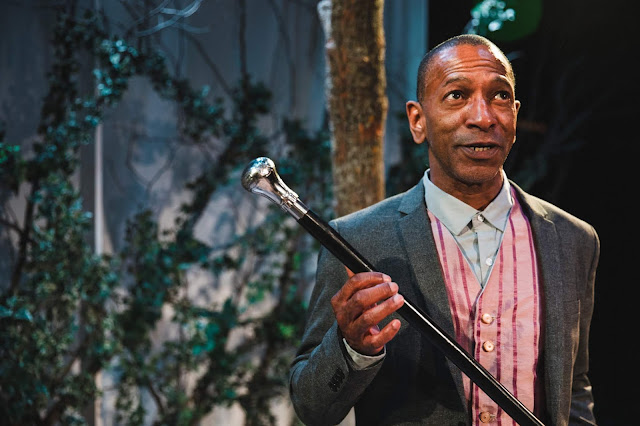 The ensemble of Idle Muse Theatre Company explores this classical fantasy with an impossible ending. Shakespeare’s story of human beings living in a world broken by the unforgivable acts of a man in power is the basis for this new adaptation focused on feelings and actions and as recognizable in 2019 as they were in the Bard’s time.  “The Idle Muse Ensemble felt it was deeply necessary that we tell a story about being alive right now, both for our audiences and for ourselves,” said Artistic Director Evan Jackson.  “By definition, a play is a set of circumstances and story that have no choice but to find an ending – and you could say this is a play with no roadmap to get there.  At the same time, Idle Muse was formed in the belief that we can uncover truths about the human experience through the work of theatre.  That if we do everything we can to approach the work in good faith and live truthfully under those imaginary circumstances, then we can use the vehicle of a play to approach impossible questions.  So, we’re not looking to find forgiveness at the end of this story.  Maybe forgiveness isn’t possible for some things.  But maybe the act of finding the human part of what it is to be alive right now can be something like forgiveness.  Maybe something more important – something like hope,” continued Jackson. 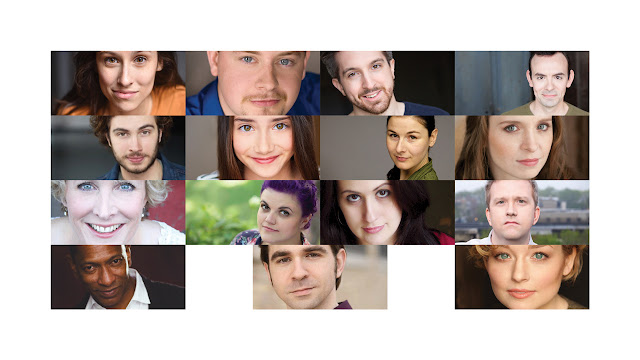 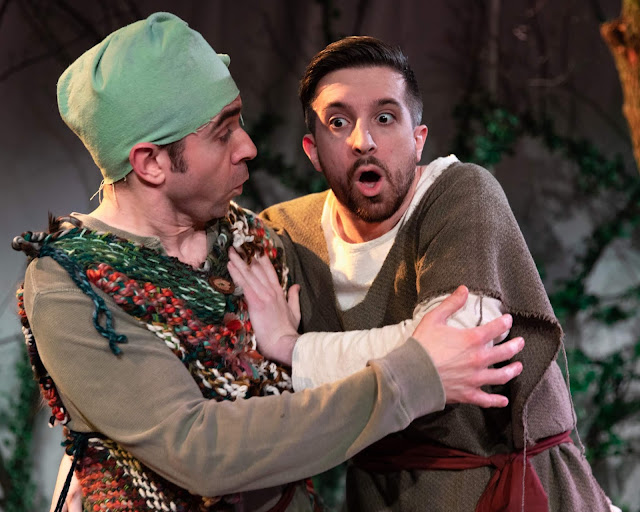 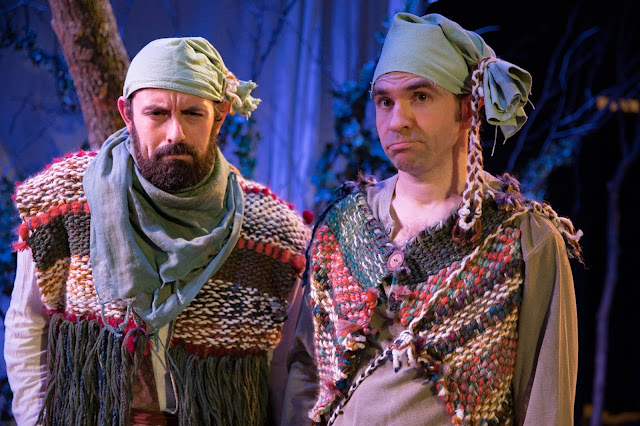 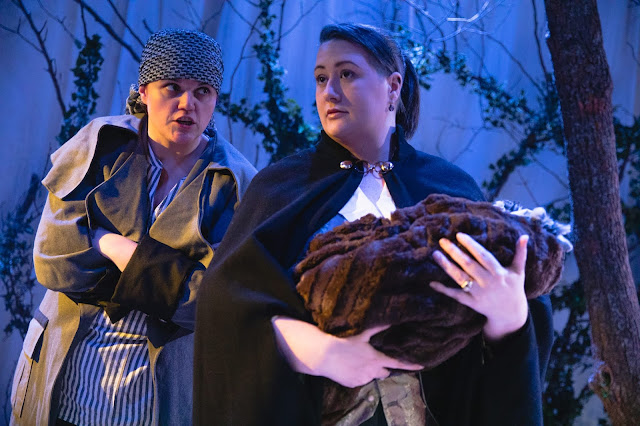 ABOUT 2019 YEAR OF CHICAGO THEATRE
Idle Muse Theatre Company is proud to be part of the 2019 Year of Chicago Theatre, presented by the City of Chicago and the League of Chicago Theatres. To truly fall in love with Chicago, you must go to our theatres. This is where the city bares its fearless soul. Home to a community of creators, risk-takers and big hearts, Chicago theatre is a hotbed for exciting new work and hundreds of world premieres every year. From Broadway musicals to storefront plays and improv, there’s always a seat waiting for you at one of our 200+ theatres. 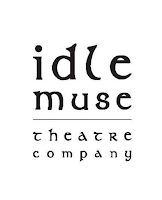 ABOUT IDLE MUSE THEATRE COMPANY
Idle Muse Theatre Company is a 501 (c3) non-profit charity organization that produces theatre that transports. Established in 2006 by theatre artists who were interested in exploring the relationship between individuals and worlds they inhabit and seeking to create production opportunities for themselves and other artists. In order to do this, Idle Muse created a “modern guild” of players, an environment where theatre artists of different experience levels and backgrounds could develop their craft and learn from each other.

Idle Muse Theatre Company is partially supported and funded by generous grants from The MacArthur Funds for the Arts and Culture at The Richard H. Driehaus Foundation.   The Edge Theater Off-Broadway has paid street parking and is wheelchair accessible with complimentary assisted listening devices available. It is located near both the Red Line Berwyn and Bryn Mawr stops and is on the 36 Broadway bus route.

Posted by Bonnie Kenaz-Mara at 2:56 PM

Email ThisBlogThis!Share to TwitterShare to FacebookShare to Pinterest
Labels: Best for Winter being a short Shakespeare adapted from The Winter’s Tale and other works, Catherine Hellmann, guest review, Idle Muse, review, Theatre Chicago