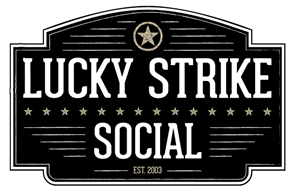 ChiIL Mama will be out for the press opening March 14th, so check back soon for my photo recap and review.

Lucky Strike Entertainment (LSE), the leader in entertainment concepts for all ages, will debut its latest creation, Lucky Strike Social at Wrigleyville, in Chicago’s iconic neighborhood on Friday, February 15 at 1027 W Addison St. Lucky Strike Social at Wrigleyville is a one-of-a-kind entertainment experience and a new destination for North Siders with time to spare, bringing together chef-driven food and craft beverages, along with eight Lucky Strike Lanes, over 100 electronic gaming systems including the exclusive Daytona Championship USA Motion SDLX - a first in the world of its kind, plus two private party rooms, and a “Prize Room” retail store in over 30,000 square feet of social space with unprecedented views of Wrigley Field.

“Wrigleyville is one of Chicago’s most spirited neighborhoods, and we are excited to join the community,” says CEO of Lucky Strike Entertainment, Steven Foster. “You can feel the energy as you walk down Addison, and we look forward to contributing to the growth of this already booming area surrounding Wrigley Field.”

Upon arrival, guests will make their up to the second level where they are welcomed by floor to ceiling windows that offer an unparalleled view of Wrigley Field, as well as the neighborhood’s famed Addison St. and the Addison CTA Red Line station. Complemented with the venue’s various activation areas, this space will allow guests to unleash their inner child all while enjoying a truly unique experience in Wrigleyville.

LUCKY STRIKE LANES
The new Wrigleyville venue will feature eight acclaimed Lucky Strike Lanes (LS), universally recognized in national media as the leading brand in the boutique-bowling category. Lucky Strike was born with DNA from The Big Lebowski, having been launched in 2003 by Steven and Gillian Foster with some of the original décor from the Coen Brother’s original movie set. Lucky Strike has been featured on Access Hollywood, Entertainment Tonight, HBO’s Entourage and Newsroom, Undercover Boss, Jimmy Kimmel Live!, Late Night with Stephen Colbert, The Voice and countless other media platforms. Over the years, Lucky Strike has hosted a full spectrum of celebrities, thousands of corporate and private events, and has contributed to hundreds of charities.

FOR THE WIN (FTW)
For another “WOW” factor, Lucky Strike Social at Wrigleyville will offer more than 100 state-of-the-art electronic games, ranging from boardwalk classics to super deluxe attractions. In addition, this North Side location will play host to the exclusive Daytona Championship USA Motion SDLX, the first in the world of its kind that took nearly two years to develop.

In addition to the high tech gaming, Lucky Strike Social at Wrigleyville will also offer “Prize Room,” the venue’s 428-square-foot retail store offering more than 250 prizes including novelties, electronics, game consoles and other amazing prizes, served by a digital E-Ticket system to track winnings and claim prizes. Eliminating the need to cash out or take home tokens or tickets, gamers have the opportunity to activate every game using their E-Ticket and will be able to exit and reenter at any time.

The food program at Lucky Strike Social at Wrigleyville will elevate traditional pub fare into modern, handcrafted culinary staples in an open kitchen setting. With menus designed to share among friends, patrons can enjoy small bites of Kalua Pork Nachos, Andouille Stuffed Mushrooms, and Philly Cheesesteak Egg Rolls, along with a selection of 10oz. burgers that include the Bring Da Heat Burger, Mushroom & Swiss Burger, and the Ultimate Burger, as well as slider options such as Filet Mignon, Cubano, and Caribbean Jerk Chicken. Additional food menu items include a selection of crafted pizza, handheld sandwiches, and dessert items to satisfy any sweet tooth.

The vibrant cocktail menu consists of a selection of handcrafted cocktails, wine options, as well as beers served on draft and in bottles or cans. Cocktail options include the Pink Elephant with Grey Goose, triple sec, peach liqueur, orange, pineapple and cranberry juice, with a sugar rim; the Blackberry Basil Mule, mixed with Absolut, fresh lime juice, simple syrup, blackberries, basil, topped with ginger beer; and the Malibu Mermaid with Malibu, pineapple juice, milk, crème de cacao, and finished off with cayenne pepper and a sugar rim.

To complete the unique experience, guests will be able to watch their favorite sports teams away from all the crowds at Lucky Strike Social’s 56’ long industrial-style bar. With four 82” 4K TVs alongside two 12’x7’ LED video walls surrounding the bar area, Chicago sports fans will not miss a single play as they sit front and center to watch the action.

PARTY ON
With a one-of-a-kind array of entertainment options, Lucky Strike Social at Wrigleyville offers two exciting private suites for guests to enjoy. For larger gatherings, venue buyout options that accommodate up to 750 guests are also available. Whether it be an upcoming birthday party for any age, a social outing, a company team building event or a spirited Chicago Cubs post-party, event packages are custom tailored to provide the perfect setting for a unique and unforgettable experience.

ABOUT LUCKY STRIKE ENTERTAINMENT
Lucky Strike Entertainment is the creator and operator of a range of entertainment concepts throughout the country that cater to any age, featuring premium bowling, restaurants, bars, live music, dance clubs, billiards and game rooms. Lucky Strike has also been universally recognized in the media as the leading brand in the boutique bowling category. With state-of-the-art private and semi-private function rooms, Lucky Strike has hosted countless entertainment and sports celebrities, thousands of corporate and private events and has contributed to hundreds of charities. Lucky Strike Entertainment was founded in 2003 by Steven and Gillian Foster and Kevin Troy, with the opening of Lucky Strike in the heart of Hollywood. The global entertainment company continues to grow, with multiple locations across the county. For more information, please visit www.luckystrikesocial.com.