REVIEW: Choir of Man at Broadway Playhouse Through March 17, 2019

ChiIL Live Shows on our radar
THE CHOIR OF MAN 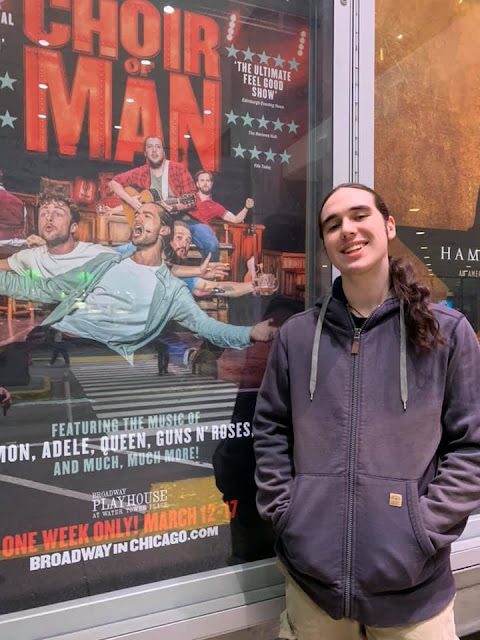 Dugan celebrating his 18th birthday at The Choir of Man
Photo by b. kenaz-mara 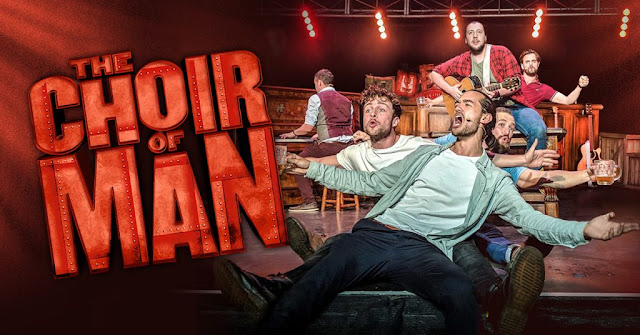 It was our great pleasure to catch opening night of the first U.S. tour of THE CHOIR OF MAN. It was my son's 18th birthday and we both thoroughly enjoyed these bawdy Brits. The eclectic mix of music ranged from a classic English ballad, to show tunes, and rock from the 70's through the present. My son, Dugan, knew all but about 2 of the tunes and was thrilled to hear contemporary songs in new arrangements and a closing number he sang with his cast at Bristol Renaissance Faire. Much of the audience was joyfully singing along, including my son and me. 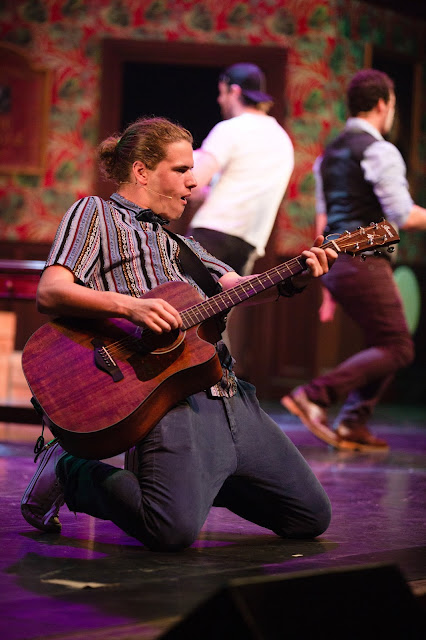 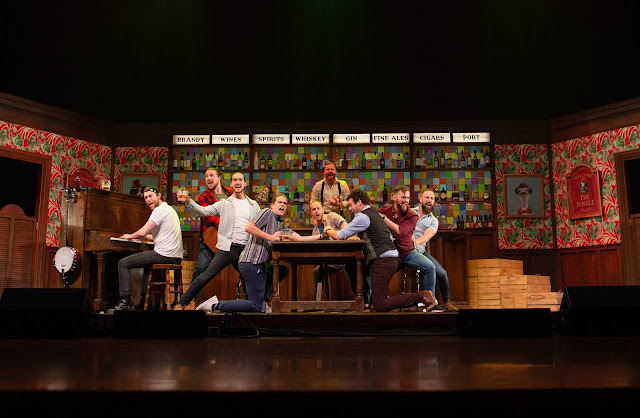 The multi-talented cast of nine men not only sang acapella numbers with finesse, but they all also played instruments ranging from bagpipes and accordion to percussion beer mugs! 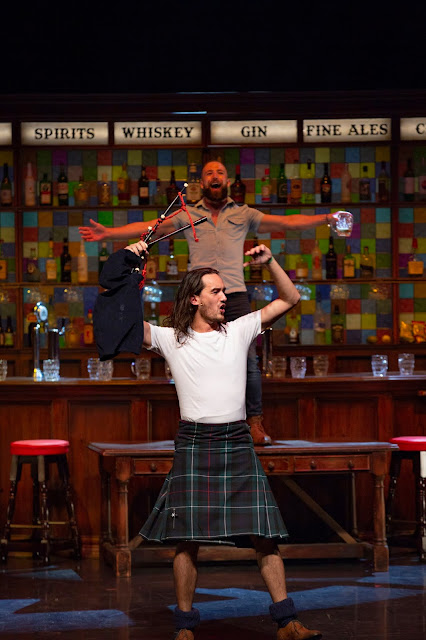 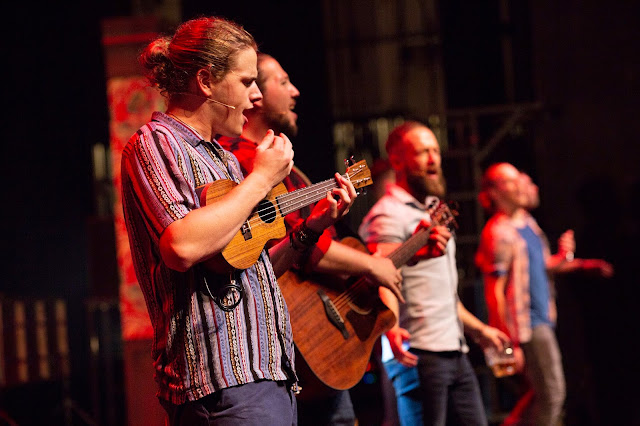 We were even treated to several tap numbers, table dancing, interesting choreography, and acro stunts. 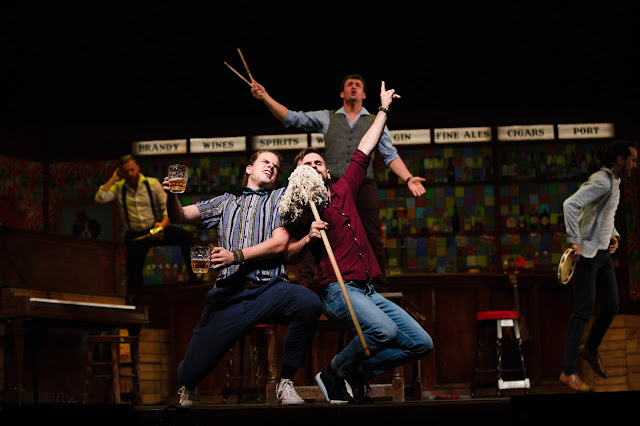 Sometimes theatrical productions that attempt to simulate the camaraderie of pubs or rock concerts miss the mark, but THE CHOIR OF MAN nails it. This show was too much fun, and made me want to come hang out at "The Jungle" pub as a regular. This high energy show made for an entertaining night out that's an appealing multigenerational pick for all ages. Highly recommended. 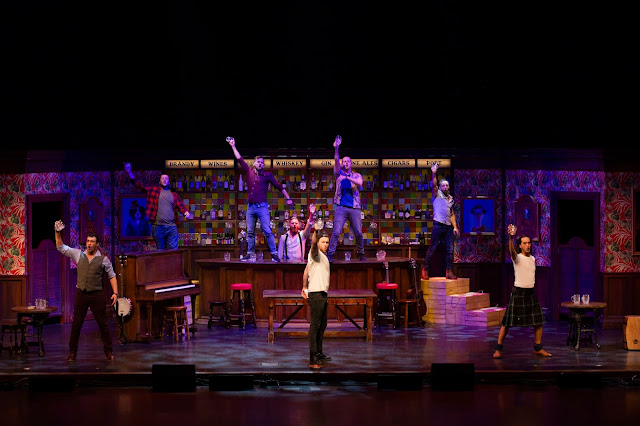 ABOUT THE CHOIR OF MAN
The runaway hit of numerous international music festivals is hitting the road for its first U.S. tour. Known across the globe as “the ultimate-feel good show,” THE CHOIR OF MAN offers 90 minutes of indisputable joy. It’s a party. It’s a concert. It’s a pint-filled good time set in a real working pub that combines hair-raising harmonies, high-energy dance, and live percussion with foot-stomping choreography. The multi-talented cast of nine handsome men sings everything – pub tunes, folk, Broadway and classic rock. It’s the best singing, dancing, stomping, pub crawl of a show you’ll ever attend! 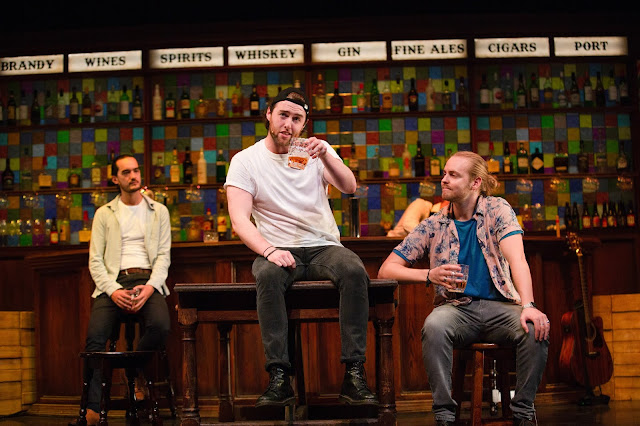 The show celebrates music that has wide appeal including songs by Adele, Queen, Paul Simon, Katy Perry, Red Hot Chili Peppers and more. The cast features world-class tap dancers, acrobats, singers, instrumentalists and poets, ensuring that there is something for everyone in this joyous and uplifting show for all ages.

THE CHOIR OF MAN is the latest show from the creative minds of producers Nic Doodson and Andrew Kay – the team behind Soweto Gospel Choir, The Magnets, and the award-winning North by Northwest. 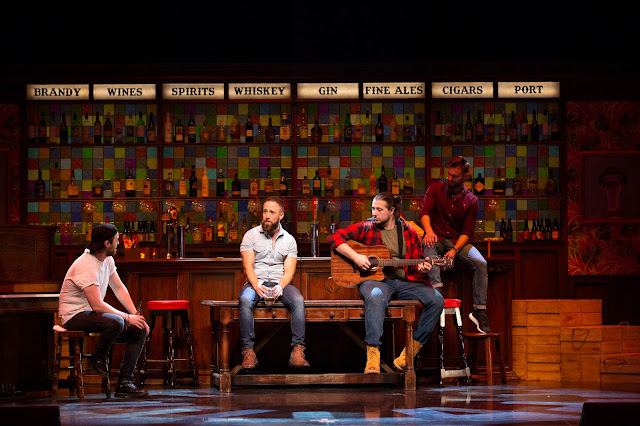 TICKET INFORMATION
Individual tickets are currently on sale and range in price from $39-$79 with a select number of premium tickets available. Tickets are available now for groups of 10 or more by calling Broadway In Chicago Group Sales at (312) 977-1710 or emailing GroupSales@BroadwayInChicago.com.  For more information, visit www.BroadwayInChicago.com.

ANDREW BATEUP (Pub Bore) Andrew is from a quaint village in the English countryside called Wadhurst. He read music at The University of Manchester before studying Musical Theatre at The Royal Academy of Music in London. Upon graduating he went straight into the major UK Tour production of Joseph and
the Amazing Technicolor Dreamcoat, performing the roles of ‘Reuben’ and ‘Butler’ for just over 2 years. Andrew performs regularly as a singer across the UK and internationally. He spent some time with the Grammy Award winning vocal ensemble The Swingle Singers before joining The Flyboys, a four part male
vocal harmony group who mash up Frank Sinatra with the likes of Bruno Mars and Christina Aguilera. Having performed in the original workshops of the show, Andrew is thrilled to joining ‘The Choir Of Man’ US Tour 2018-19 and would like to thank his girlfriend Charlotte, his agent Katy and his parents for their continued love and support.

TOM BRANDON (Hard-Man) Tom Brandon is from Rostrevor in the Northeast of Ireland. A strength and performance coach by day, he trained in Musical Theatre at Trinity Laban Conservatoire of Music and Dance and went on to study at the Royal Academy of Music, London. Professional Credits include: Spend, Spend, Spend (Union Theatre, London), Showtime: Shuffled (Watford Palace Theatre), Heaven on Earth (Workshop), The Beautiful Game (Union Theatre, London), Snow White & the Seven Dwarfs (Birmingham Hippodrome, Alhambra Theatre, Grand Opera House Belfast). Tom is thrilled to be touring the USA for the first time and would like to thank his Mammy and Daddy for all their unwavering support. Sláinte! @tombrandonuk 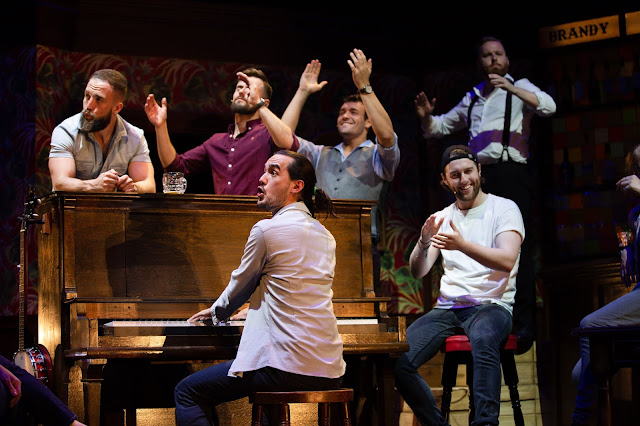 CONNOR GOING (Piano-Man) Connor studied music as part of an M.A. (Hons) in Philosophy at the University of Glasgow. After which, he completed a postgraduate diploma in Musical Theatre – awarded with distinction – from the Royal Academy of Music in London. Connor is delighted to be joining the
2018-19 USA Tour as an original cast member of The Choir of Man. Theatre credits include: Chuck/Cover Ren in Footloose (UK & International Tour), Piano Man in The Choir of Man (Australia Tour), Frederic in The Pirates of Penzance (Reid Concert Hall), Actor D in Noël Coward: A Talent to Amuse (St. James Studio Theatre), Eric Ashley in Lord Dismiss Us (Rehearsed Reading, Above The Stag Theatre), Troy Bolton in High School Musical (SECC Clyde Auditorium), Stephen/Credits while training include: Soloist in Curtain Up! (Prince Edward Theatre), David Bascombe in Tony in Copacabana (Glasgow King’s Theatre).
Carousel (Sir Jack Lyons Theatre), Larry in Closer, Lee Harvey Oswald in Assassins, Scott Furnish in Fanat-ical (workshop). TV & Film credits include: Harry in Awakening (RCS), Backing Vocalist in U2 at the BBC (Abbey Road Studios). Commercial: Mrs. Brown in The 12 Days of Christmas TV (TalkTalk).

DENIS GRINDEL (Narrator) Denis hails from Donegal in the North West of Ireland. Having initially studied law and business at University College of Dublin, he then pursued a Masters in Theatre from The Royal Central School of Speech and Drama, London. Upon graduation, he was lucky enough to be cast as the
leading man in the West End production of Roddy Doyle’s The Commitments. Denis is beyond excited to bring The Choir of Man to America. Theatre credits include Jimmy Rabbitte in The Commitments (West End, Original Cast); Lead Vocalist in Rhythm of the Dance (European Tour) Michael Collins in Collins in
London (Irish London Centre); Laertes in Hamlet (Principal Theatre Company); Spring Awakening (Helix, Dublin) Rent (Irish Tour). Film credits include When The Seagulls, Jack Mulligan. Rep: Keddie Scott Associates. Instagram: denbarrypaddy, Twitter: @DenisGrindel

PETER LAWRENCE (Beast) Peter has been with The Choir of Man since its debut at the Edinburgh Fringe Festival 2017. Having recently graduated from the Royal Conservatoire of Scotland, he has been working on projects such as The Wind in the Willows, performed at Kew Gardens with the Australian Shake-
speare Company and Playcraft Live at The Derry Playhouse in Northern Ireland filling in the gaps around The Choir of Man tours. Peter is first and foremost an actor-musician with a pub/lounge singing background and almost 20 years of experience with the guitar learning everything from folk to flamenco and traditional classical music. Outside of theatre, Peter’s main passion is songwriting, writing and poetry and as a result, is delighted to be involved in such a collaborative company embarking on this US tour.

MARK LOVEDAY (Barman) Mark is former chorister of Her Majesty’s Chapel Royal Choir at St James Palace and a graduate of Drama Studio London. He has been a member of The Choir of Man since 2016 and recently featured in the British independent film Rise of The Footsoldier 3: The Pat Tate Story.

JOHN SHEEHY (Casanova) After completing a Degree in Structural Engineering and a Masters in Business Studies, Johnny decided to follow his true passion - performing. Hailing from Cork in Ireland, he studied acting and directing in Actorsvision Cork before moving to Swindon in 2015 to train in dance at Liberatus School of Performing Arts. As semi-finalist in The Voice of Ireland 2015, he has performed live to audiences of over one million viewers. In 2016, Johnny had a number one single in Ireland. His professional performing career began with the inception of The Choir of Man in 2016 and since he has
toured theatres in China and India with The Magnets along with The Choir of Man tours of UK, Australia and the US. Johnny also travelled to India twice to train as a Yoga Instructor (500hr RYT) and he incorporates this into his performing life. As an avid Liverpool F.C. fan he has also spent many a day

belting out songs on the famous Kop! 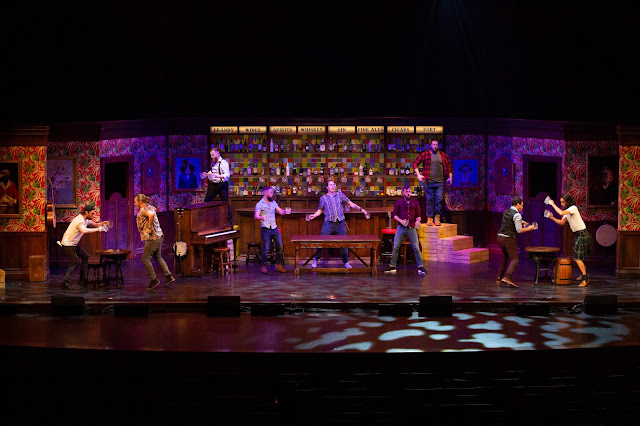 ABOUT BROADWAY IN CHICAGO
Broadway In Chicago was created in July 2000 and over the past 19 years has grown to be one of the largest commercial touring homes in the country.  A Nederlander Presentation, Broadway In Chicago lights up the Chicago Theater District entertaining more than 1.7 million people annually in five theatres. Broadway In Chicago presents a full range of entertainment, including musicals and plays, on the stages of five of the finest theatres in Chicago’s Loop including the Cadillac Palace Theatre, CIBC Theatre, James M. Nederlander Theatre, and just off the Magnificent Mile, the Broadway Playhouse at Water Tower Place and presenting Broadway shows at the Auditorium Theatre. For more information, visit www.BroadwayInChicago.com.

Posted by Bonnie Kenaz-Mara at 5:38 PM