Experiential gifts like theatre tickets make fantastic, clutter busting presents. Your presence with loved ones, enjoying a shared story brought to life on stage is truly a gift. Check back with ChiIL Mama and ChiIL Live Shows year round for theatre news, original reviews, video interviews, and ticket giveaways. I'm particularly jazzed to take the kids to this one since I was IN Twelfth Night in college! 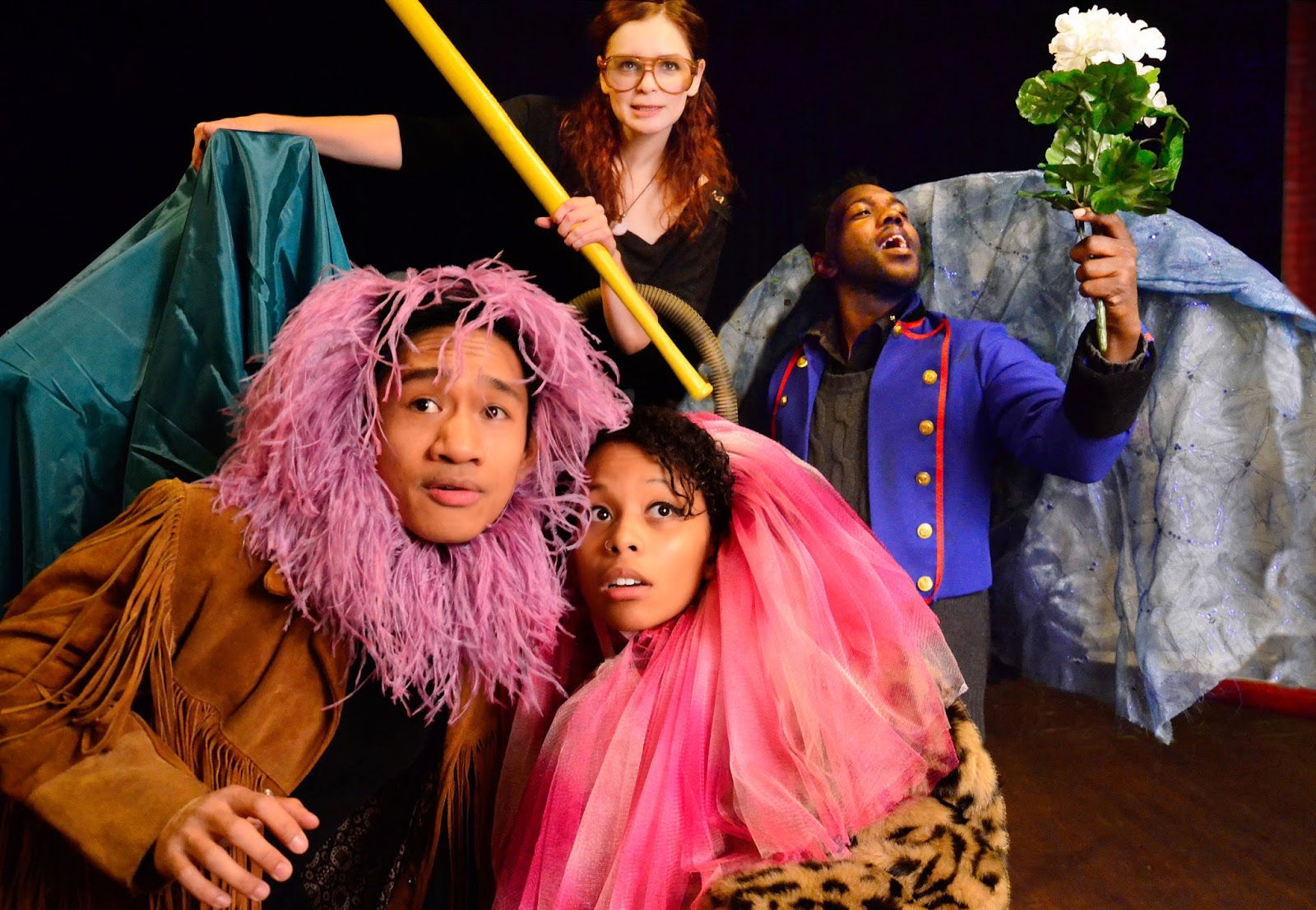 (Back, L to R) Kate McDermott as Antonia the monkey pirate, Mykele Callicutt as Orsino the peacock nobleman; (Front, L to R) Bryan Bosque as Sebastian the lion, and Brandi Lee as Violet the lion. Photo by Suzanne Plunkett.

Disclosure: It's our pleasure to partner up with Lifeline Theatre for years now.  They have provided us with tickets for our giveaway and for review purposes. As always, all opinions are our own.

World Premiere Based on William Shakespeare’s Twelfth Night Opens January 11 Plus Stories Come Alive! Hour Workshops Every Saturday and Sunday During the Run.

*(This production is recommended for children ages five and up (children under two not permitted), and runs one hour with no intermission.

Lifeline Theatre’s KidSeries presents Lions in Illyria, a world premiere based on William Shakespeare’s Twelfth Night, written by Lifeline Theatre ensemble member Robert Kauzlaric and directed by Lifeline Theatre ensemble member Amanda Delheimer Dimond. Separated from her brother by a storm at sea, the young lioness Violet must brave an unknown country all alone. Disguised as a boy, she joins with a preposterous peacock on a quest to claim the attentions of the most graceful gazelle in town. But soon Violet is torn between multiple masters and her adventure takes a turn for the absurd when she becomes entangled in the clownish antics of a wacky warthog and his featherbrained dodo sidekick. Travel to the weird and wonderful land of Illyria in a magical comedy loaded with music, monkeys, and mayhem. 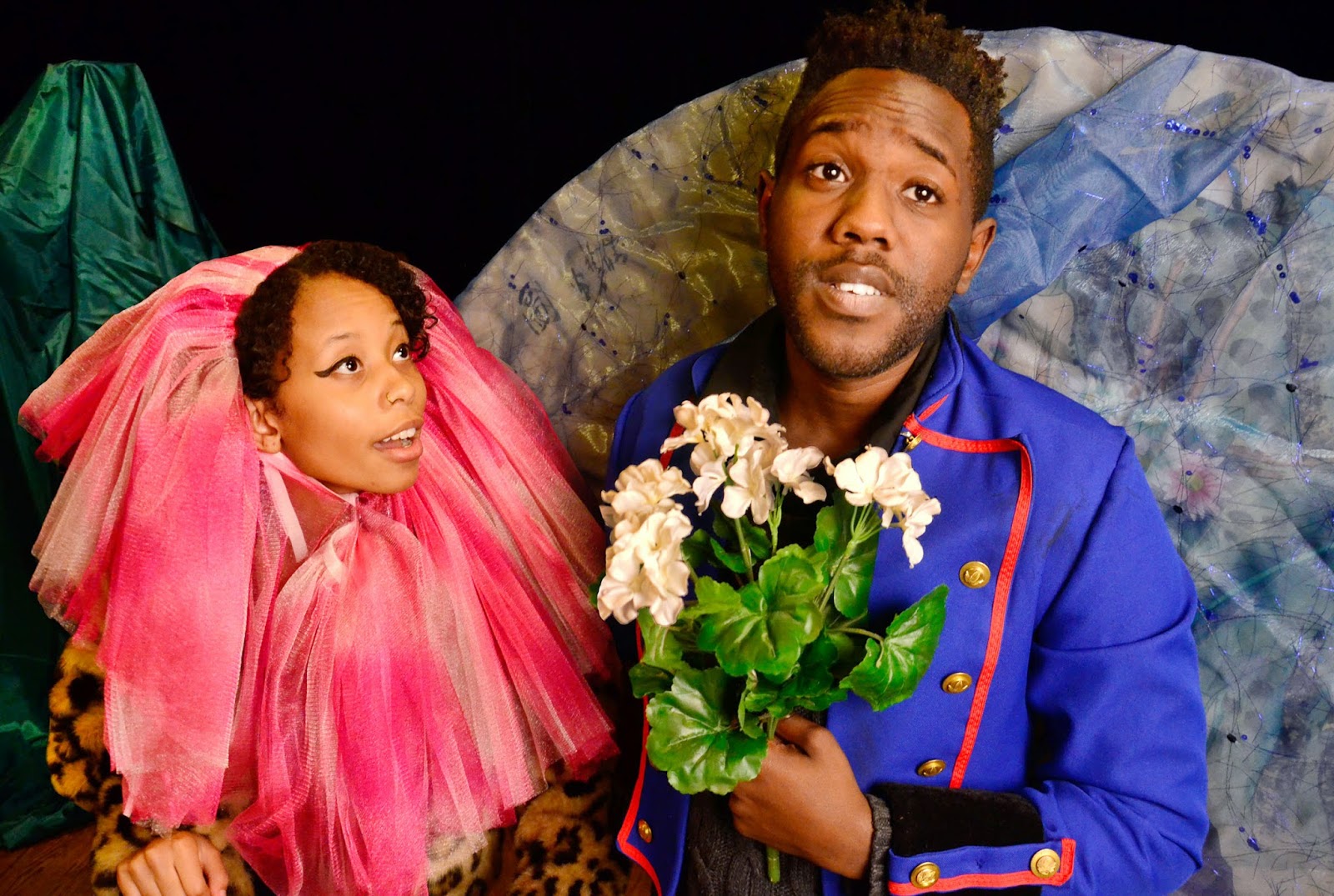 (L to R) Brandi Lee as Violet the lion  and Mykele Callicutt as Orsino the peacock nobleman. Photo by Suzanne Plunkett.

PLUS: Join Lifeline Theatre every Saturday and Sunday at 12 p.m. during the run of Lions in Illyria (following the 11 a.m. show, or before the 1 p.m. show) for our Stories Come Alive! Hour. Children will enjoy an interactive storytelling session and on-your-feet theatre games. The cost is only $5 per child. Reservations are recommended, though not required. Contact Lifeline Theatre at 773-761-4477 for more information.

Lifeline Theatre also offers “Name Your Price” tickets a half-hour before the show (subject to availability), group rates and other discounts available upon request. A party room is available for full-service birthday and special event parties. Free parking is available at the designated lot west of the theatre (NE corner of Morse and Ravenswood) with free shuttle service before and after the show. Street parking is also available and Lifeline Theatre is handicapped and CTA accessible (Red Line Morse stop/busses).

Throwback to Lifeline and ChiIL Mama's Dugan & Sage in 2010. 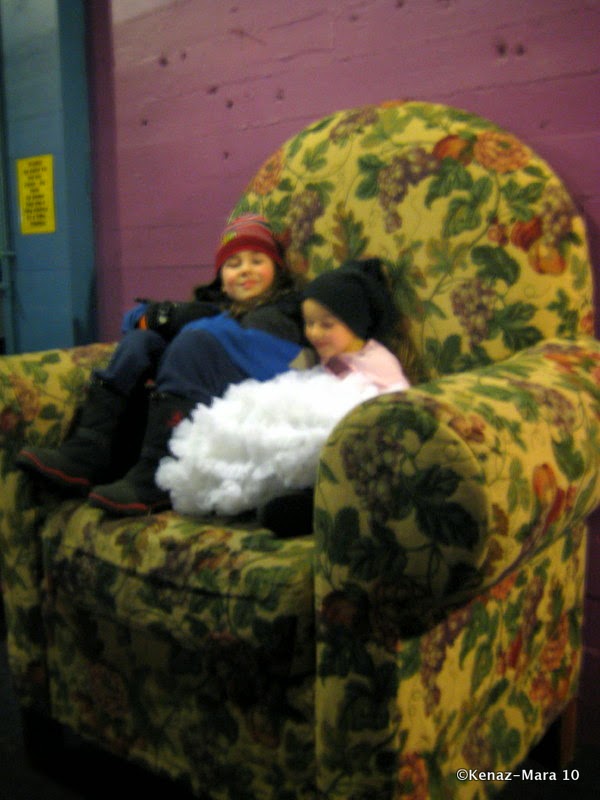 What a difference 4 years makes when you're talking about growing kids! But the chair remains the same. We have a whole photo series with Lifeline's giant lobby chair that likely spans a decade now! We have loooooong been huge fans of Lifeline's adult and Kids Series shows and love their world premier book based adaptations. Growing up with Lifeline has truly been a treat. 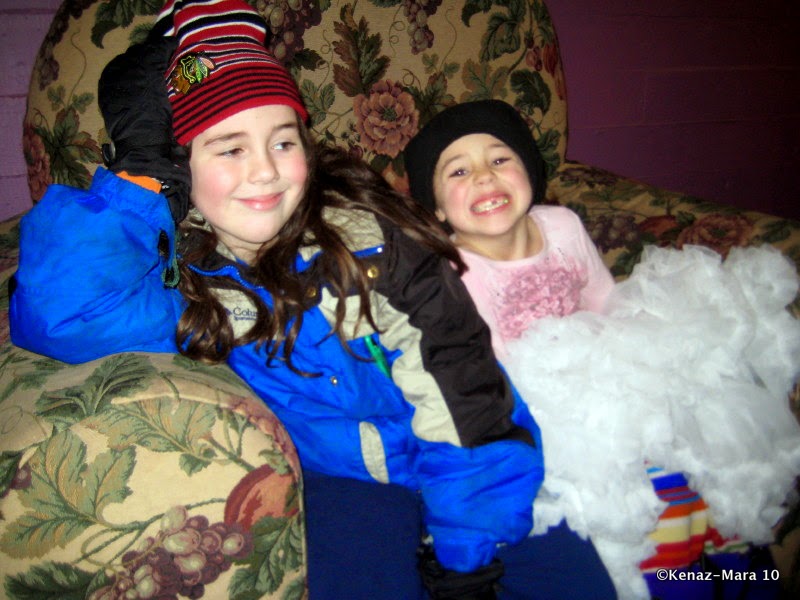 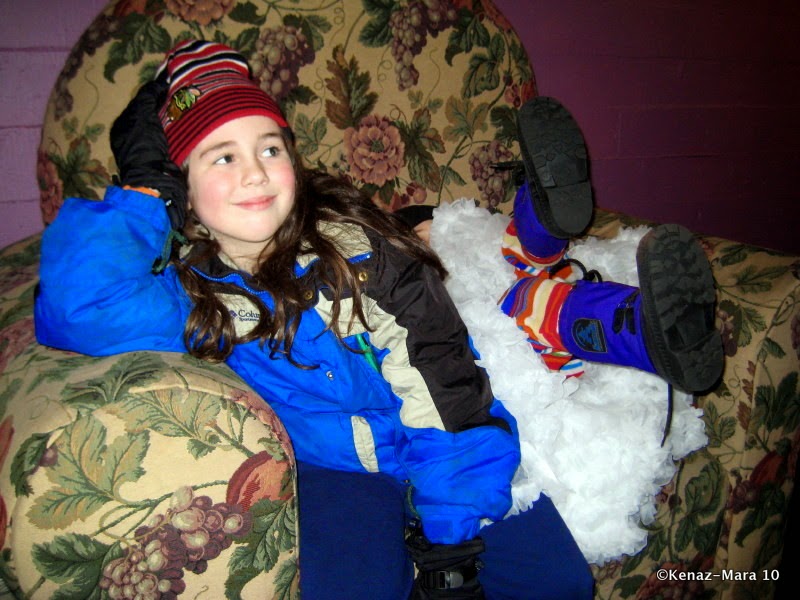 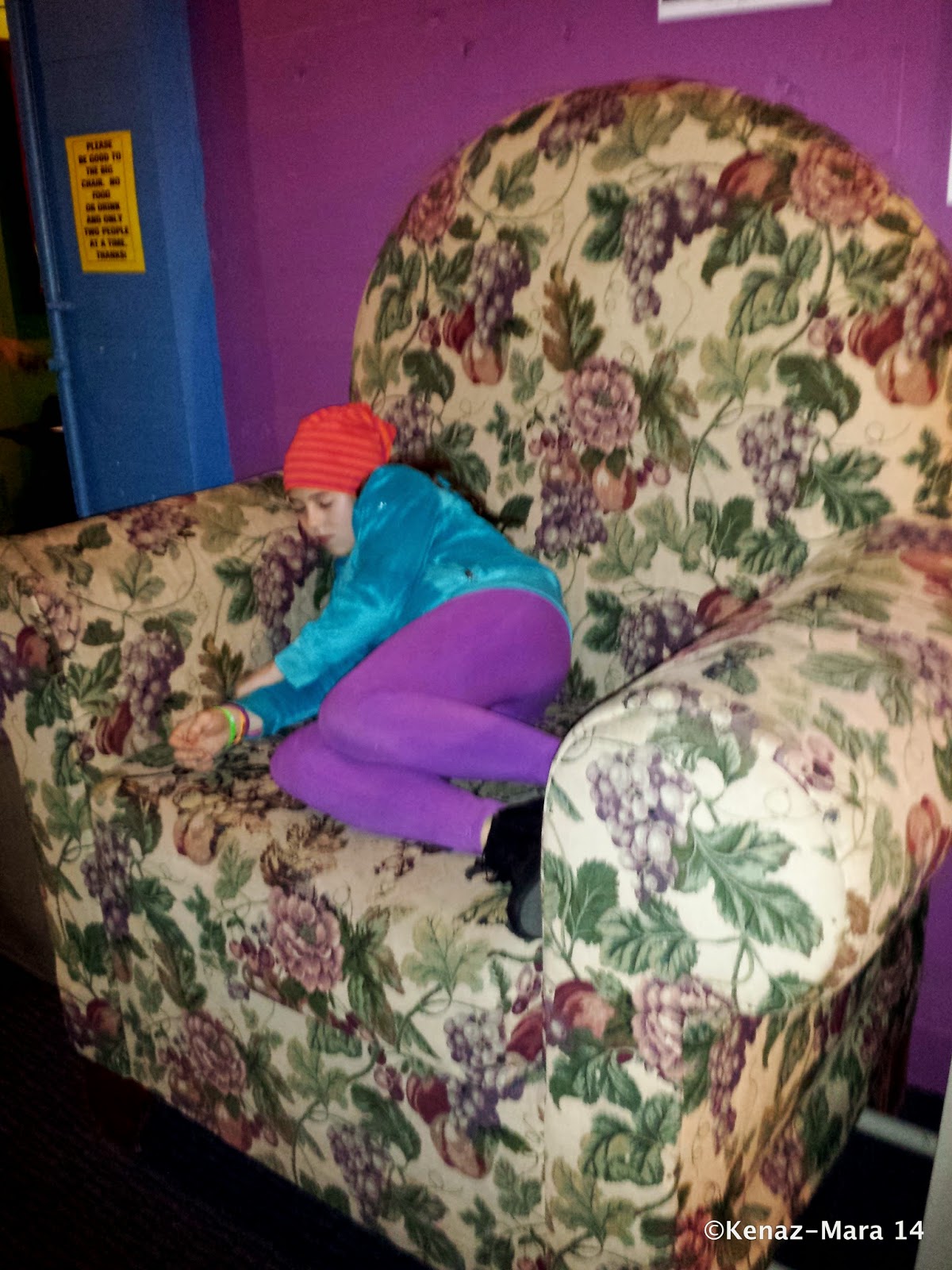 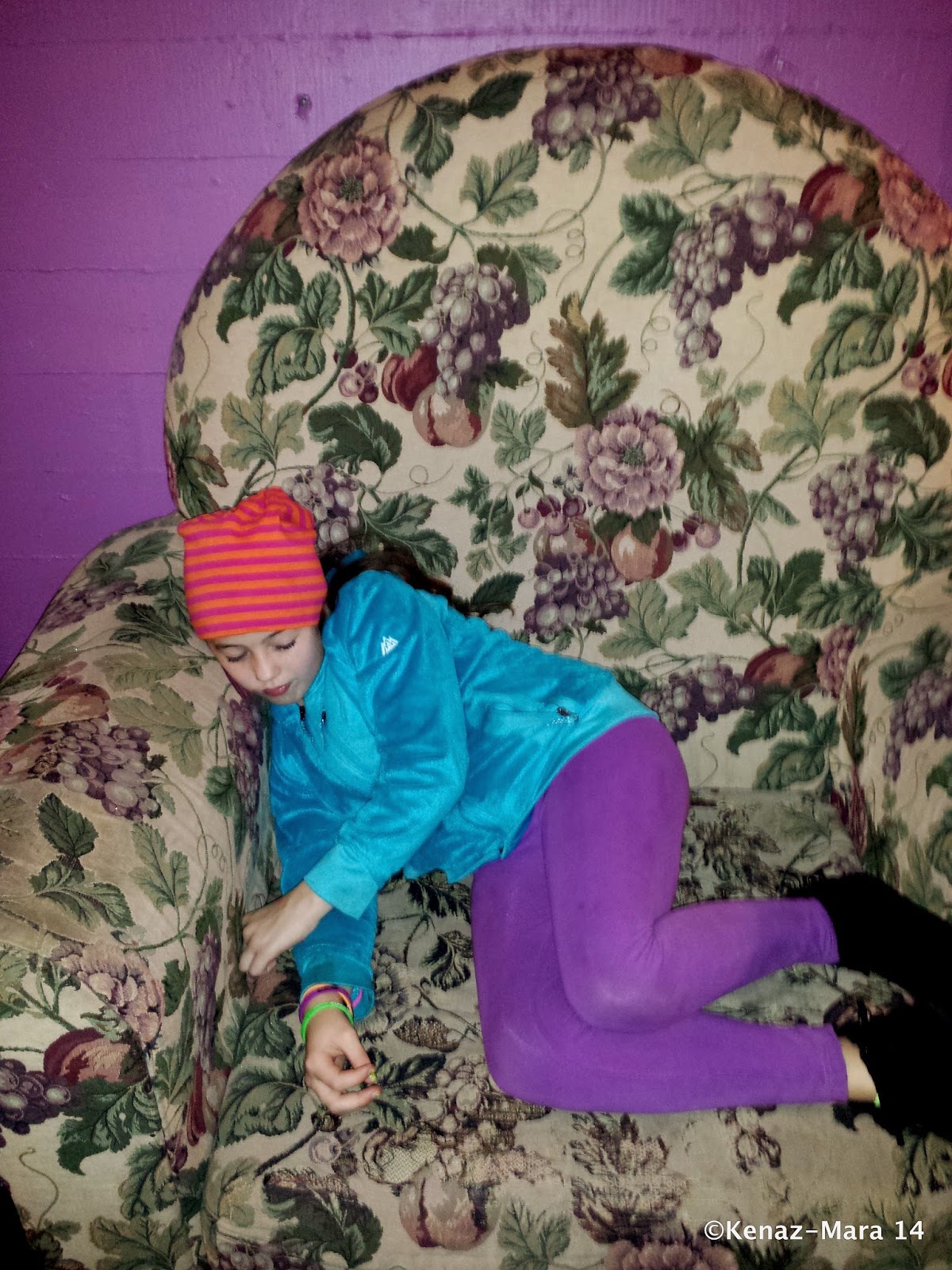 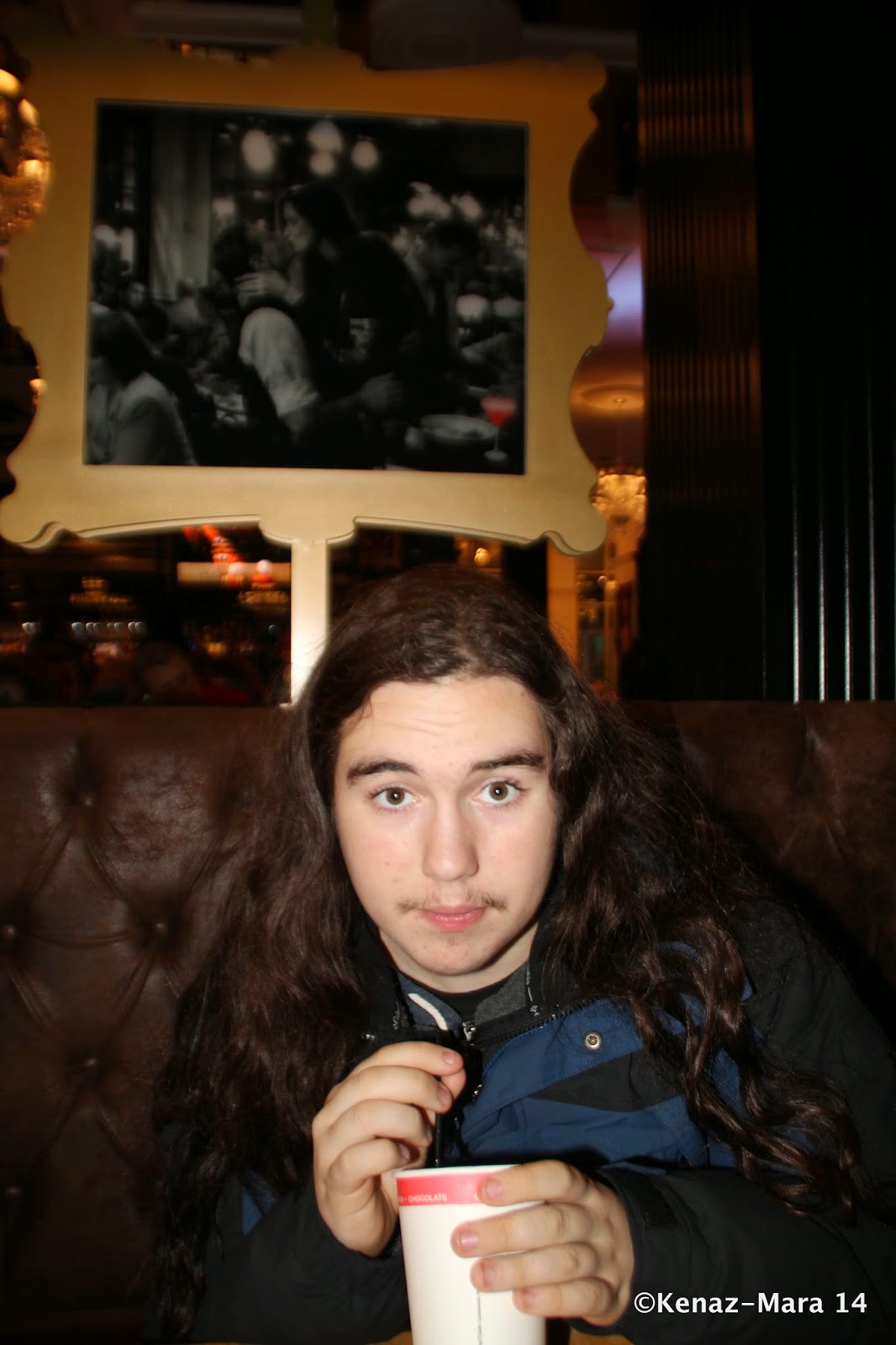 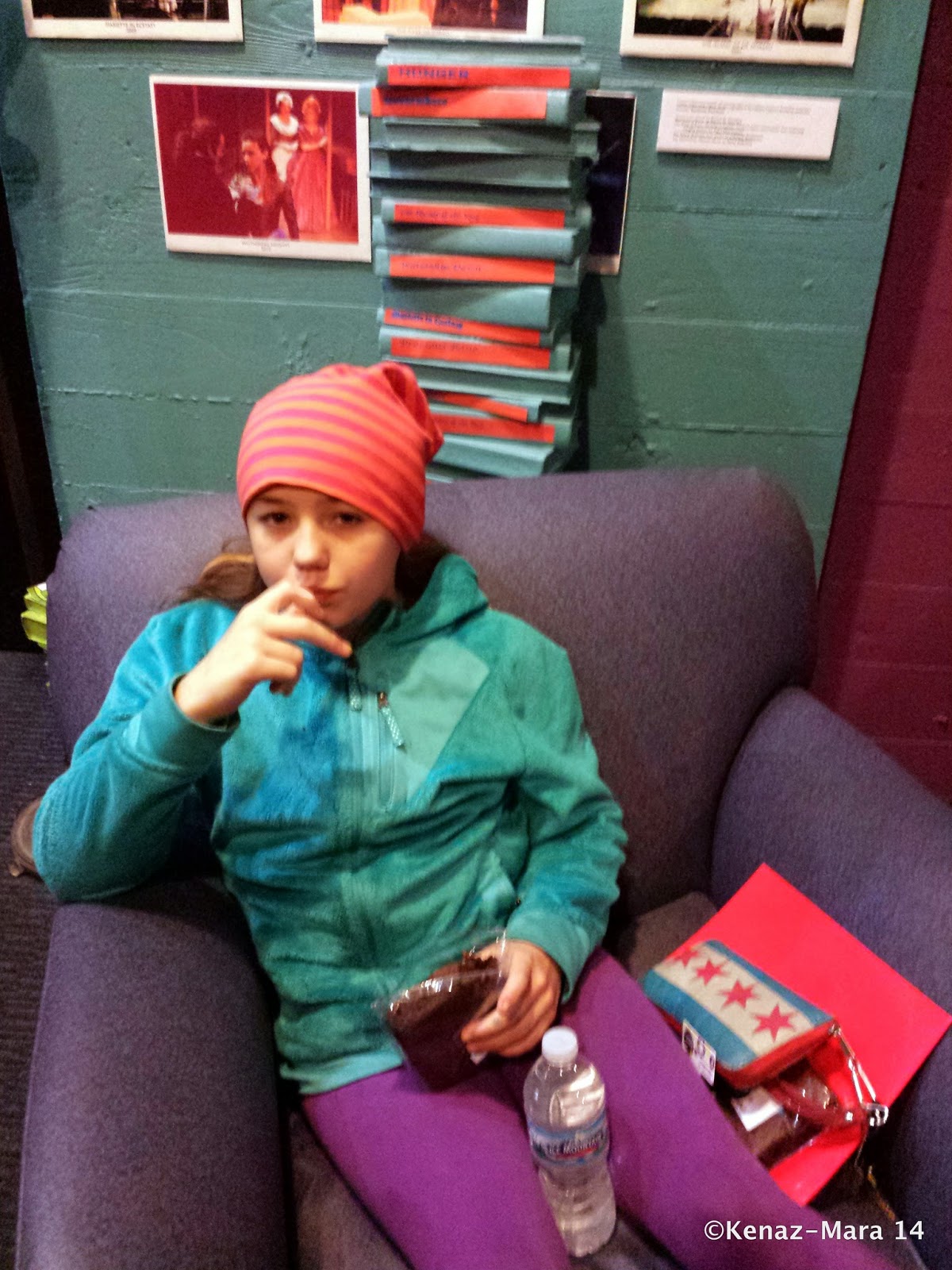 Some things change... Some stay the same. 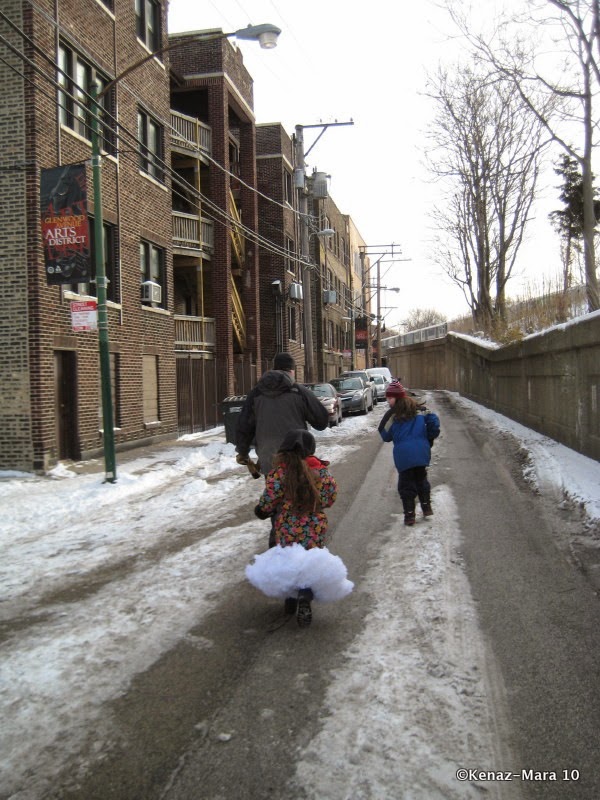 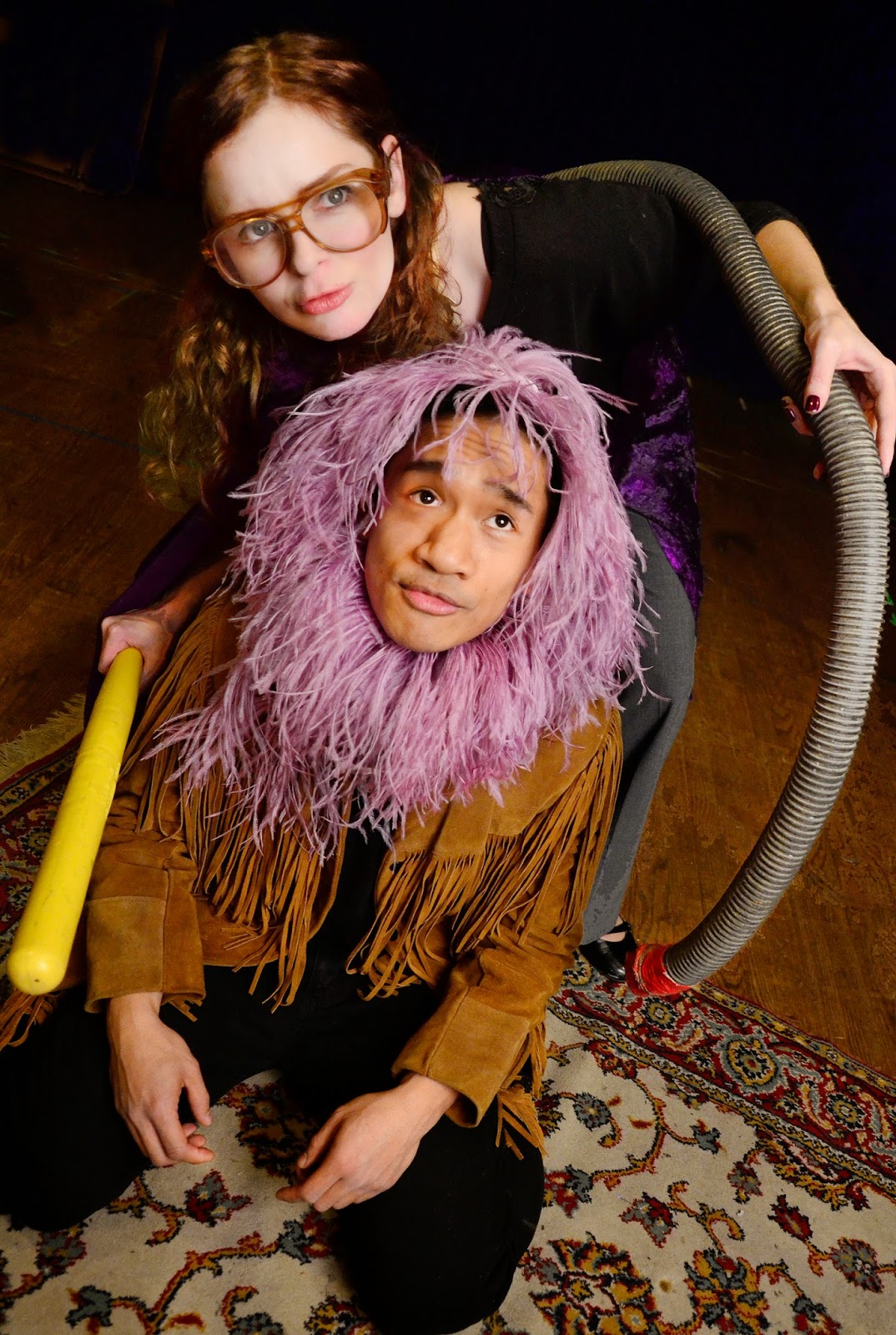 (Top) Kate McDermott as Antonia the monkey pirate and (Bottom) Bryan Bosque as Sebastian the lion; in Lifeline Theatre’s production of “Lions in Illyria,” by Robert Kauzlaric, directed by Amanda Delheimer Dimond, based on Twelfth Night by William Shakespeare; beginning Saturday, Jan. 10, 2015, and running through Sunday, Feb. 15. Lifeline Theatre is located at 6912 N. Glenwood Ave. Chicago, IL 60626. For tickets call the box office at 773-761-4477 or visit www.lifelinetheatre.com. Photo by Suzanne Plunkett.

The complete cast and production team for Lions in Illyria includes:

Now in its 32nd season, Lifeline Theatre is driven by a passion for story. Our ensemble process supports writers in the development of literary adaptations and new work, and our theatrical and educational programs foster a lifelong engagement with literature and the arts. A cultural anchor of Rogers Park, we are committed to deepening our connection to an ever-growing family of artists and audiences, both near and far. Lifeline Theatre – Big Stories, Up Close.

During the great passenger pigeon migration of 1871, throngs of strangers descend upon Placid, Wisconsin, bringing prosperity in their wake. But as the skies clear, tragedy strikes and Georgie Burkhardt’s sister goes missing. When a body is found and the town goes into mourning, Georgie sets out on her own to uncover the truth behind Agatha’s disappearance. The journey that follows, both humorous and heartbreaking, will test the limits of her courage and the strength of her character. A powerful coming-of-age tale combines live music with historical events in a world premiere adaptation based on the 2013 novel by Chicago-based author Amy Timberlake, a Newbery Honor Book and Edgar Award winner.

The devious Doctor Impossible has escaped from prison and legendary superhero CoreFire has vanished without a trace. With the fate of the world in their hands, the New Champions have mere hours to recover their fallen comrade and stop their arch-nemesis before his doomsday device is complete. Joined by Fatale, a cyborg with an arsenal of deadly hardware and a host of self-esteem issues, the mighty super-team must face their darkest hour — and the truths buried in their deeply troubled pasts. A thrilling new musical about power and identity set in a vibrant world of heroes and villains, in a world premiere adaptation based on the 2007 novel by Austin Grossman.
KidSeries

Separated from her brother by a storm at sea, the young lioness Violet must brave an unknown country all alone. Disguised as a boy, she joins up with a preposterous peacock on a quest to claim the attentions of the most graceful gazelle in town. But soon Violet is torn between multiple masters and her adventure takes a turn for the absurd when she becomes entangled in the clownish antics of a wacky warthog and his featherbrained dodo sidekick. Travel to the weird and wonderful land of Illyria in a magical comedy loaded with music, monkeys, and mayhem. Based on the rollicking comedy Twelfth Night, by William Shakespeare.

A world premiere based on the powerful bestseller by Katherine Applegate, illustrated byPatricia Castelao
Adapted by James E. Grote
Directed by Dorothy Milne

For 27 years, the world of Ivan the gorilla was a dull cage in a roadside shopping mall. But when he meets Ruby, a baby elephant captured in the wild, Ivan’s ambitions and imagination must grow to meet the challenge of rescuing his endangered new companion. Aided by Bob the scrappy dog and a young human ally, Ivan sets out to become the great silverback and protector he was always meant to be. Enter the mind of a remarkable hero in this unforgettable story of enduring friendship, drawn from true events. Based on the 2012 book by Katherine Applegate, a #1 New York Times bestseller and winner of the Newbery Medal.

Tickets: $75; $50 for Lifeline subscribers.
Following the runaway success of the 2012-13 Dorothy L. Sayers Series and 2013-14 Georgette Heyer Series, Lifeline continues the tradition with concert readings of three beloved hits from our past: Around the World in 80 Days, adapted by ensemble member John Hildreth (originally produced in 2002, winner of 6 Non-Equity Jeff Awards, including New Adaptation); A Room with a View, adapted by ensemble member Christina Calvit (originally produced in 2006); and Pride and Prejudice, also adapted by Christina Calvit (originally produced in 1986, remounted in 1992 and 2012). All three readings will feature numerous Lifeline ensemble actors and returning original cast members.
Each evening begins at 6 p.m. with hors d'oeurves, a light supper, and wine (plus conversation with the cast and Lifeline ensemble). At 7 p.m., the performances start. (Script times vary, but are approximately two and a half hours in length.) Afterwards, coffee and dessert will be served.
Only 108 tickets will be sold for each performance. Tickets can only be ordered by calling the Lifeline Box Office at 773-761-4477.


Participants, scheduling and full pricing details for the 2015 Fillet of Solo Festival will be announced in Fall 2014.

Disclosure: Once again, it's our pleasure to partner up with Lifeline Theatre for years now.  They have provided us with tickets for our giveaway and for review purposes. As always, all opinions are our own.

Check back with us and enter like we vote in Chi, IL... early and often. It's rewarding! ChiIL Mama's Holidaze 12 Days of Giveaways is on through December 17th for items 1-6 and December 20th for 7-12, with loads of great daily giveaways, flash giveaways on Facebook/Twitter, gift guide ideas, and holiday happenings in Chi, IL and beyond. All giveaways are open nationwide. Here's the master link where ALL our 12 Days of Giveaways Are Added.
Posted by Bonnie Kenaz-Mara at 11:11 AM