The set up sounds great in theory, the advance press impressed, and the location at The Chicago Theatre is fabulous. Sadly, Cirque Dreams Holidaze failed to live up to the hype. If you don't already have tickets, we recommend you sit this one out. 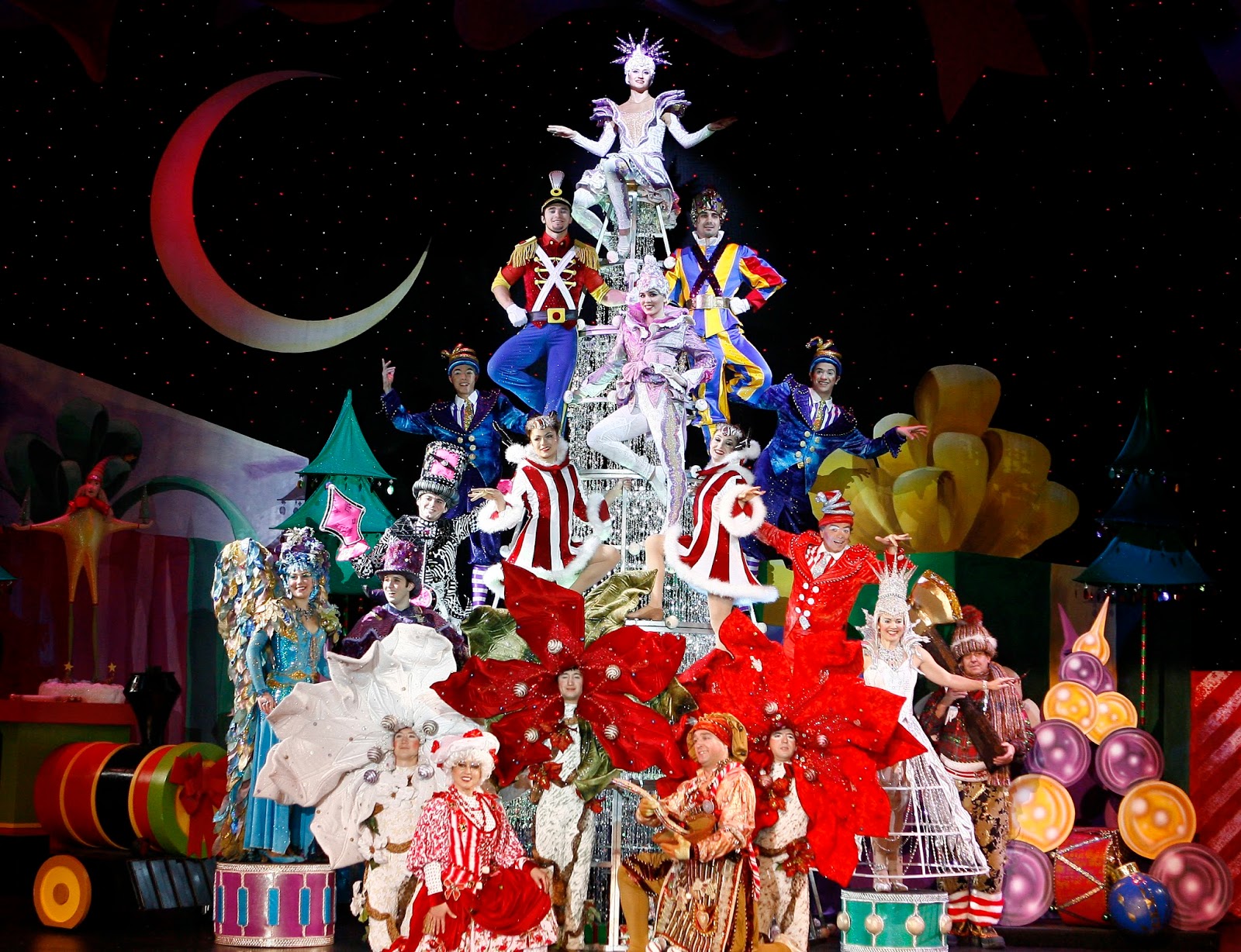 This is a quicky 5 day run so don't worry if you already bought tickets. It's an entertaining enough night out, but all glitz and little substance. There is some talent in the ensemble. The bounce juggler, the balance board duo, the child contortionist, and the quick change artists are stand outs, and the 2nd act is infinitely better than the first. That said.... buyer beware.

First off, don't get suckered in by their name. This is NOT a Cirque du Soleil show and we bet they fill a good portion of their seats by people who mistakenly think they are. Their vibe is more side show, cruise ship or amusement park show style with permagrins and predictable acts. If they dazzled the country (as their press release glowingly states) it was only because of the copious amounts of glitter on the particularly jarring and unflattering costumes like conductor overalls and plaid shirts! They even ventured into dumb blonde jokes at the expense of an audience member. No. Just no people.

They also suffered some RF interference opening night that caused mics to cut out, and forced the actors to resort to hand held microphones, which is sloppy and unprofessional for a $75 a seat show. Their group choreography was off, and the background "dancers" who basically just jiggled scenery seemed extraneous in just about every scene. The demented looking penguins, the snow man, and the nude body suit dude wrapped in ribbons seemed like costuming meant more to demean the actors than delight audiences. 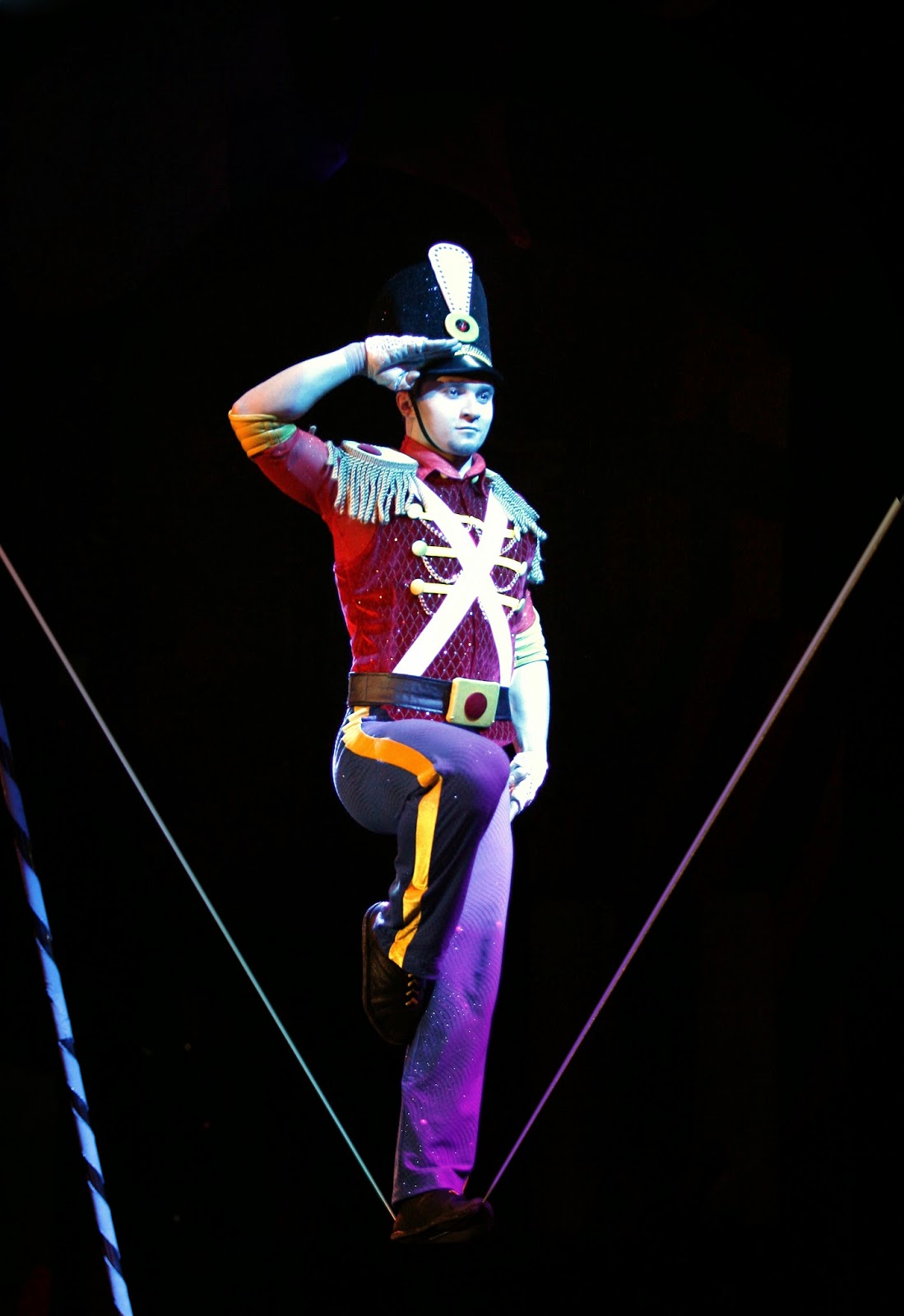 The soldier had so much mascara around his eyes he resembled a skull. And don't get me started about the odd thing in the sleigh that looked like a Thanksgiving turkey on stilts with an elf head... 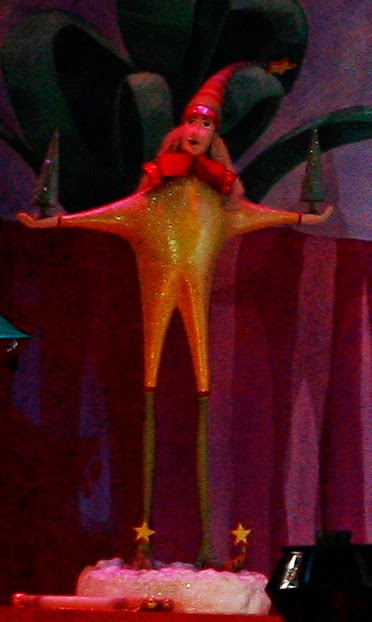 This show is the theatre equivalent of what my kids have dubbed the "grandma faker" DVDs--low production value knock offs that resemble high quality hits just enough to avoid copyright infringement and sucker people into mistaking them for the real thing.

For the money you are far better off seeing Lookingglass Theatre's phenomenal Alice in Wonderland for superior circus arts and a far better story line. Even cheap ticket locals like El Circo Cheapo, Midnight Circus and Actor's Gym have more innovative routines and highly skilled circus performers for under $20 a ticket. We've seen better Cyr Wheel from Chicago's own Shayna Swanson in the late stages of her pregnancy! 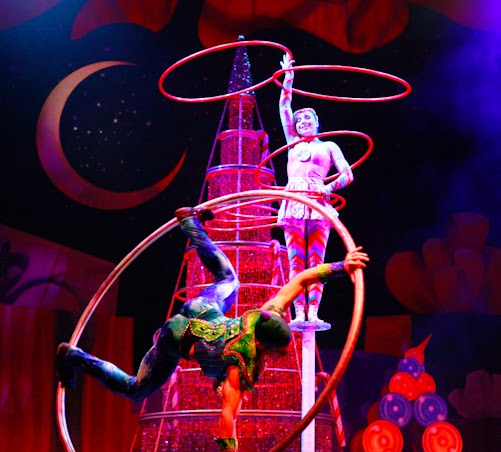 We left laughing at the costumes (shimmering gold pants ending in candy cane stripes?) and bewildered at the odd song choices--a sexy aerial routine to a Christmas Hymn?! There were no live musicians and the canned tunes were standard cliche holiday hits mixed with poor rip offs of Harry Potter and Willy Wonka where they snuck in a few familiar bars then riffed on them. The few talented acts in the show deserved a better showcase than this shoddy set, and 2nd rate costuming & choreography provided them. 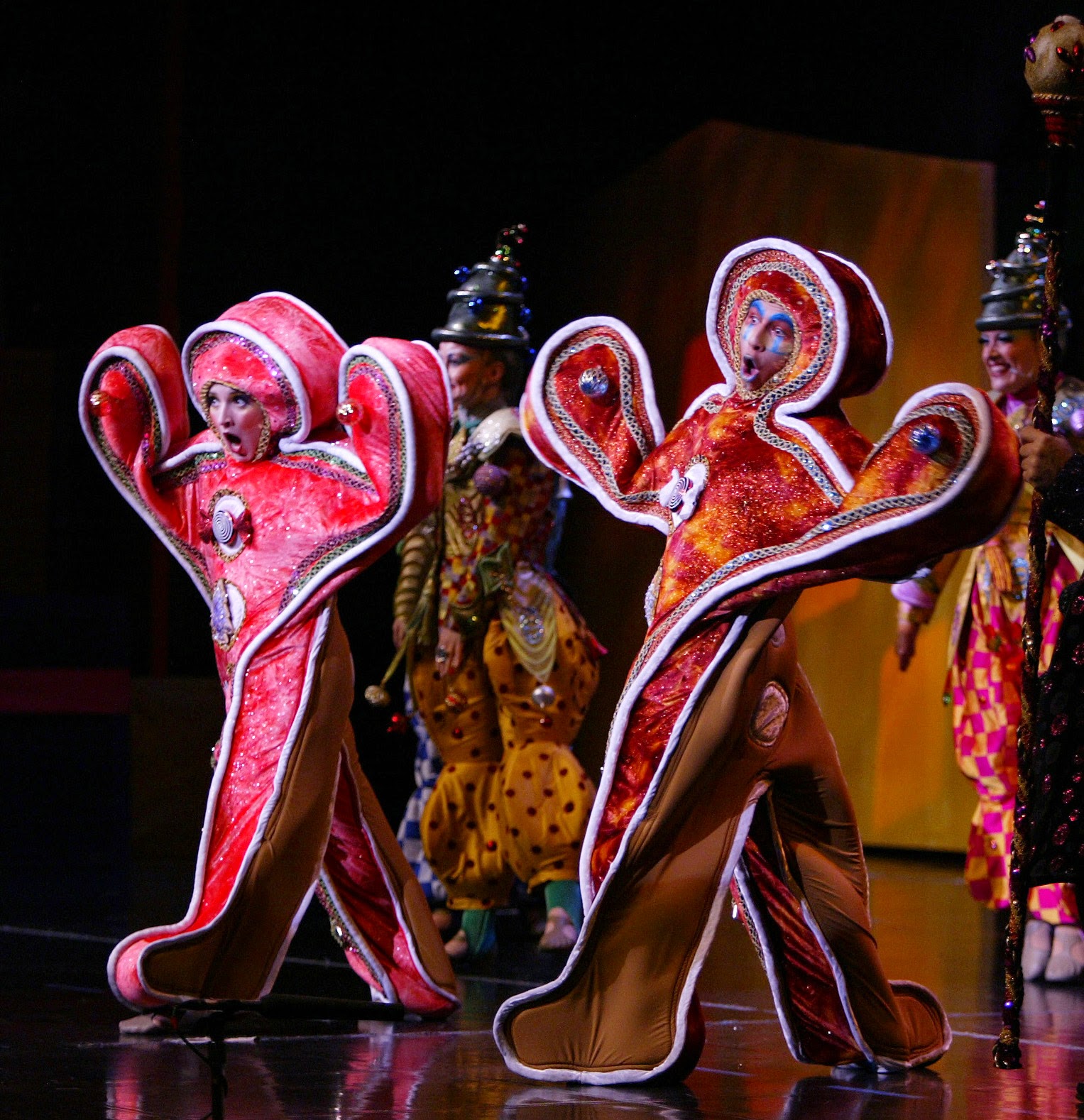 That said, we have seen more than our fair share of stellar, world class circus arts, including almost all of the real Cirque du Soleil shows, so we do have pretty high standards. We are also big fans of shows that actually have plot lines versus a disjointed run of tricks, like Cirque Dreams. If that's not a deal breaker and you do decide to go, here are the details.

CIRQUE DREAMS RETURNS TO CHICAGO WITH “CIRQUE DREAMS HOLIDAZE” A NEW CIRQUE SHOW, BROADWAY MUSICAL AND FAMILY CHRISTMAS SPECTACULAR ALL IN ONE

Celebrate the Season with the Greatest Holiday Variety Show on the Planet through December 21, 2014 at the Chicago Theatre 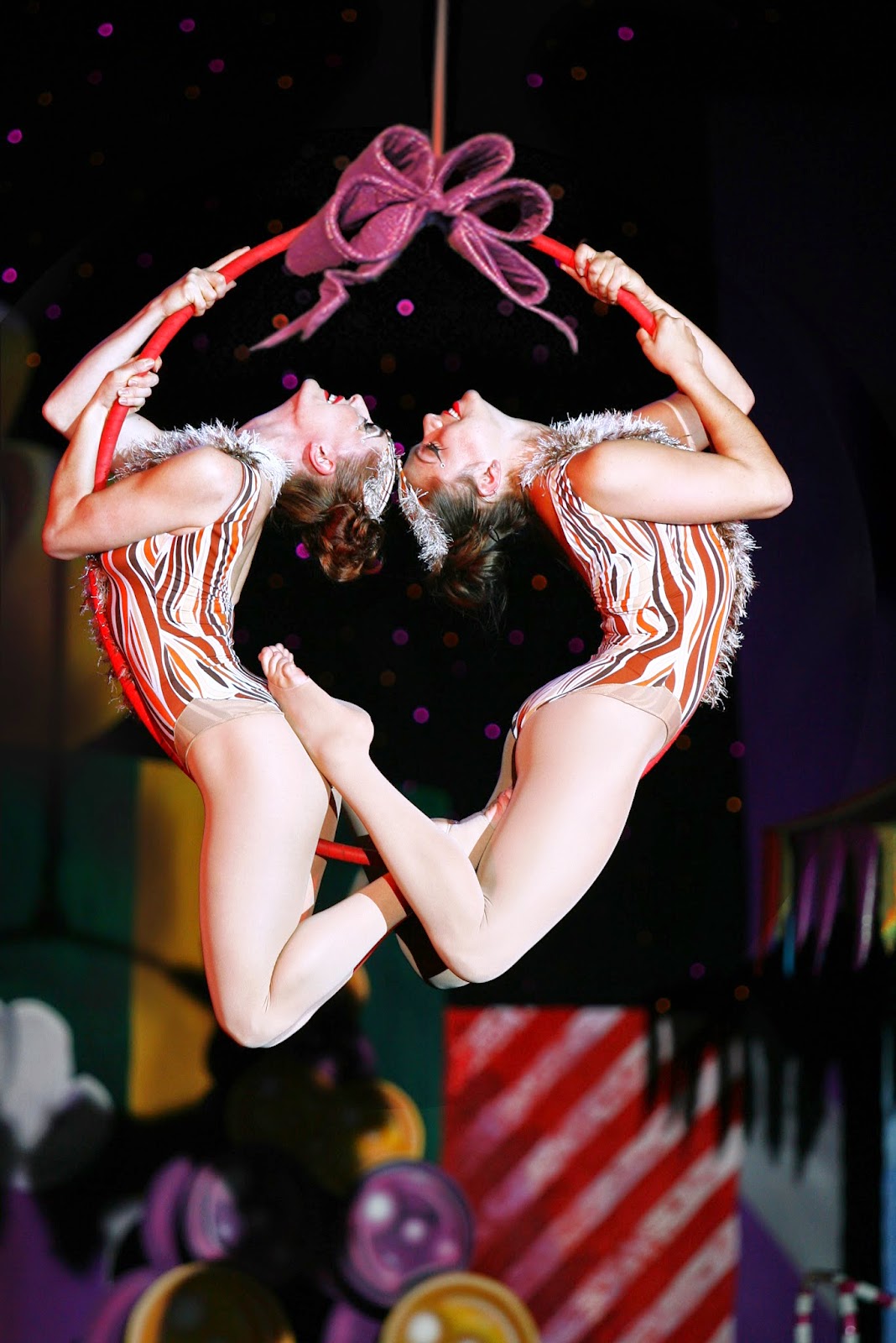 Cirque Dreams triumphantly returns to Chicago with its critically acclaimed holiday stage extravaganza, Cirque Dreams Holidaze, December 17- 21 at the Chicago Theatre (175 North State St.) From the creators of the groundbreaking Broadway hit Cirque Dreams Jungle Fantasy, Cirque Dreams Holidaze is the perfect holiday gift for families and audiences of all ages. Be amazed by this holiday spectacle with over 300 costumes, 20 acts and 30 artists from every corner of the globe. Many of these acts have been featured on “America’s Got Talent” and similar TV shows in other countries making Cirque Dreams Holidaze the greatest variety show on the planet!

Before opening in New York in 2015, Cirque Dreams Holidaze will dazzle Chicago audiences with a magnificent production that brings together the best elements of a new cirque show, a Broadway musical, a Christmas spectacular and a family holiday show all in one. Watch in disbelief as snowmen, penguins, angels, reindeer, toy soldiers, gingerbread men, ornaments and of course Santa perform elaborate production numbers, soaring acrobatics, gravity-defying feats, astounding illusions and more. The show also celebrates the most wonderful time of the year with singers, original music and seasonal favorites all performed in a winter wonderland of enchantment.

Directed by world-renowned circus impresario and Broadway director, Neil Goldberg. Cirque Dreams Holidaze re-imagines the holiday season with glitz and suspense that one can only dream of in a “Holidaze.” The New York Daily News raves a "delicious confection of charm, sparkle and talent by the sleigh-load and so full of energy it could end our dependence on oil” and The Washington Post proclaims that the production "dazzled...at The Kennedy Center.” Cirque Dreams Holidaze is presented locally by Jam Theatricals. For more information visit jamtheatricals.com
Performance Schedule 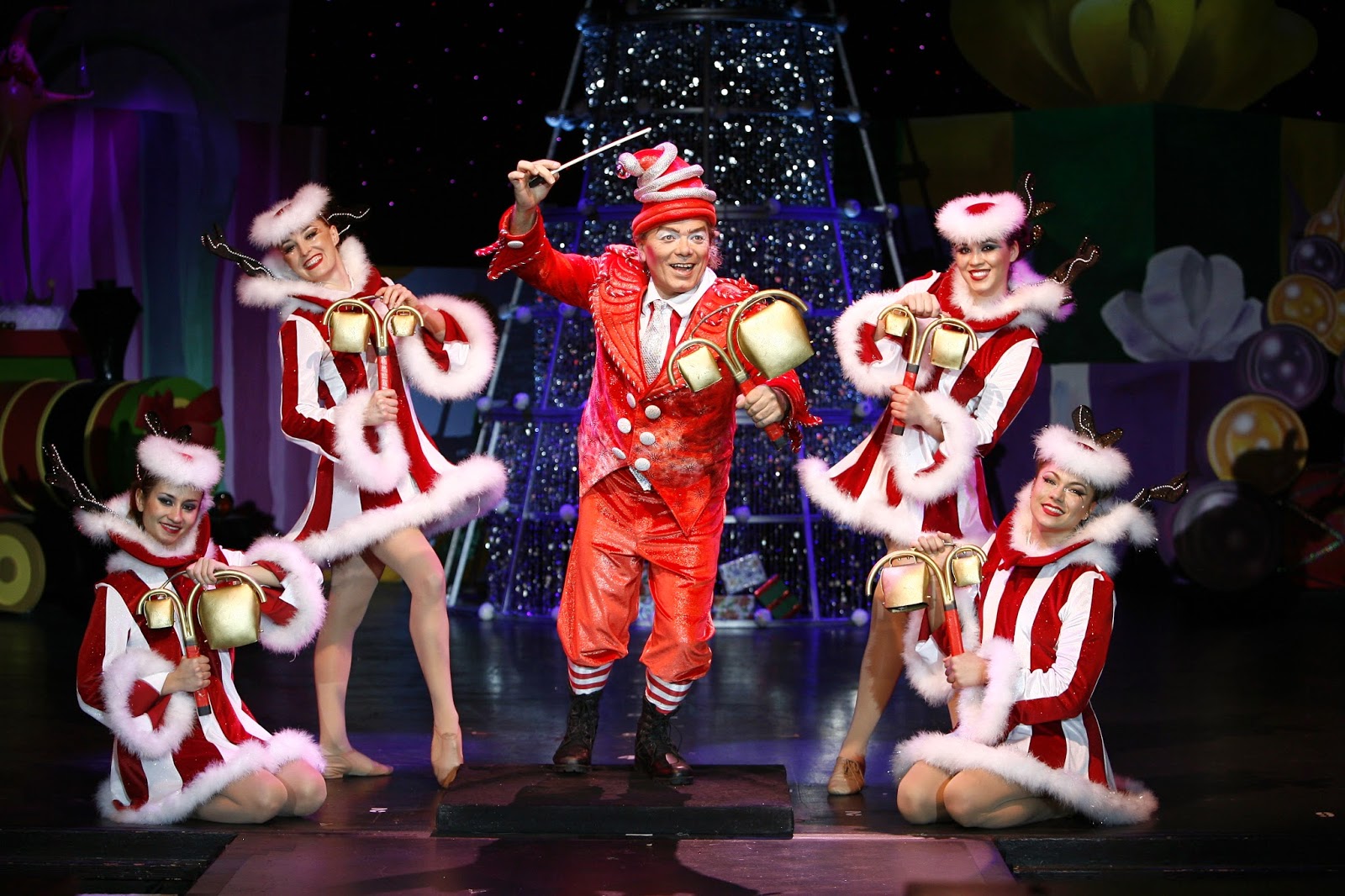 About Jam Theatricals
Jam Theatricals (Presenter) is a Chicago-based entertainment company that presents and produces Broadway engagements throughout North America. Under the direction of co-founders Arny Granat and Steve Traxler, Jam Theatricals manages subscription seasons in 30 cities where they strive to bring the best of Broadway to the communities served. Current presentations include some of Broadway’ biggest blockbusters: “Wicked,” “The Book of Mormon,” “Jersey Boys” and many more. Jam Theatricals and its principals are the recipients of seven Tony Awards® for producing “Glengarry Glen Ross” (Best Revival of a Play, 2005), “Monty Python’s Spamalot” (Best Musical, 2005), “The History Boys” (Best Play, 2006), “August: Osage County” (Best Play, 2008), “Hair” (Best Revival of a Musical, 2009), “Who’s Afraid of Virginia Woolf?” (Best Revival of a Play, 2013) and “All The Way” (Best Play, 2014). Currently on Broadway, Jam Theatricals is producing “You Can’t Take It With You,” the Pulitzer Prize-winning comedy written by George S. Kaufman and Moss Hart. For more information, please visit www.jamtheatricals.com.

Posted by Bonnie Kenaz-Mara at 7:04 PM