OPENING: Antarctica: A Year on Ice at Music Box #ChiILFlixPicks

Antarctica: A Year on Ice

Chicago will look downright balmy once you've seen this stunningly gorgeous documentary on Antarctica. Here at ChiIL Mama we caught a sneak peek at this acclaimed gem and highly recommend it. Like most of the best docs, this one takes time to unfold and it's filmed over a 10 year span, including 9 winters. 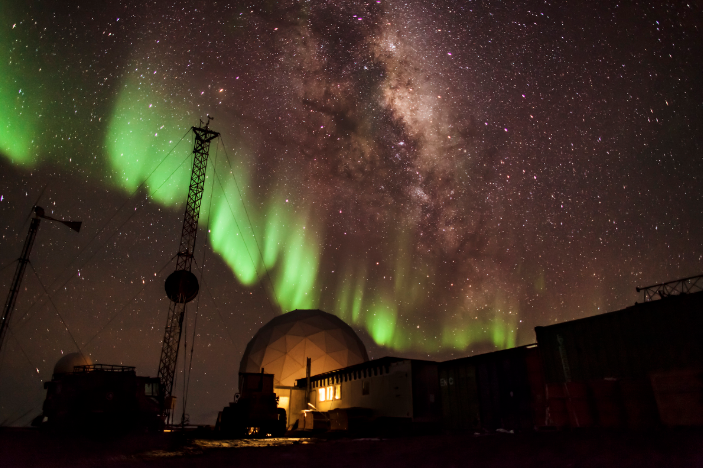 Anthony Powell's passion for the place and people shines through and makes this a must see. I'm still amazed that the people who choose to work and live on the most isolated continent were gregarious enough to do such great interviews. There are many witty and wise sound bites and quotes sprinkled throughout. This doc is a unique blend of insight into universal human truths and character interwoven with a strong sense of place. Antarctica: A Year on Ice does a stellar job of illuminating the way the harsh terrain influences the people and vice versa. The pristine landscape shots are a powerful plea for the natural world and this doc does a surprisingly supurb job using one of the darkest places in the world to shine a light on the subject.

“Breathtaking! A deeply moving experience. I urge you to see this film.”
-Michael Sigman, Huffington Post

“Words are entirely inadequate to convey the experience of watching this film. An extraordinary achievement that reinvigorates our sense of wonder about the natural world.” -Peter Calder, The New Zealand Herald

Experience a year in the harshest place on Earth, following the people who live and work on the frozen continent. Filled with exhilarating never-before-seen images, painstakingly filmed for over 10 years, including 9 winters in months of unending darkness, ANTARCTICA: A YEAR ON ICE is a thrilling, eye-opening journey to the frigid and beautiful end of the world.

About the film
ANTARCTICA: A YEAR ON ICE is a visually stunning journey to the end of the world with the hardy and devoted people who live there year-round. The research stations scattered throughout the continent host a close-knit international population of scientists, technicians and craftsmen. Isolated from the rest of the world, enduring months of unending darkness followed by periods when the sun never sets, Antarctic residents experience firsthand the beauty and brutality of the most severe environment on Earth. Capturing epic battles against hellacious storms, quiet reveries of nature’s grandeur, and everyday moments of work and laughter, this unique documentary shows a steadfast community thriving in a land few humans have experienced. Using specially modified cameras and spectacular time-lapse photography, filmmaker Anthony Powell captures the splendor of the region like no film before.

ANTARCTICA: A YEAR ON ICE gives testament to the planet’s natural wonders, humanity’s thirst for adventure, and the emotional extremes that accompany a year within the last pristine wilderness on the planet.

Film details.
What: ANTARCTICA: A YEAR ON ICE
Where: The Music Box Theatre
When: Opens Friday, December 5th, 2014

Tickets
Admission for main features and midnight films is $9.25 (different prices may apply to special presentations). The first show of the day on Mondays through Thursdays is only $8.25. Admission for the 11:30am matinee films is $7.25.
The Music Box Discount Card provides 5 admissions for $33.00 (a savings of up to $13.25; good for six months; limit two admissions per visit). Cards are available at the box office.
Film info line: (773) 871-6604. Click here for further show details, loads of fabulous holiday features, and many more films coming soon.