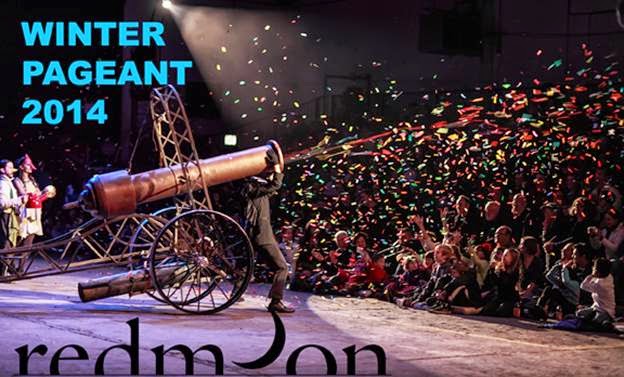 Chicago’s acclaimed Spectacle company Redmoon announces its annual family-friendly Winter Pageant for two weekends in December. In its 16th year, the holiday tradition explores the idea of grand love and honors the four seasons of the human heart. Set atop a massive glacier, the love stories are brought to life by a cast of more than 40 performers – 10 professional spectacle performers alongside 30 community collaborators. These include internationally acclaimed urban dancers, aerialists ages 8 to 35, a teen choir and beautiful, handmade Redmoon puppets and costumes, with a live original score performed by a one-man/10-instrument band. Redmoon’s Winter Pageant 2014 takes place December 12-21 at Redmoon, 2120 S. Jefferson Street. Performances are Fridays at 7 pm, and Saturdays & Sundays at 1 pm & 5 pm. Opening night is Friday, December 12. Tickets, $25 for adults and $15 for kids 3+, are available at redmoon.org or 312-850-8440 x123.

In Winter Pageant 2014, a pair of explorers travels to a massive glacier – built entirely of paper – in search of a precious mineral that will bring them great worldly wealth, but a disagreement forces them to part ways. On their separate journeys across the massive icescape, the explorers encounter a series of imaginative mythological and archetypal creatures, both real and imagined – from shadow puppet dinosaurs and deer backpacks to two larger-than-life Yeti in their hydraulic-powered ice cave home – who tell their unique stories about different kinds of love.

Winter Pageant’s poetic love stories were inspired by real-life stories collected by Redmoon’s Katrina Flores and youth mentor/performing artist Jarius King. Flores and King interviewed Chicagoans across diverse neighborhoods, backgrounds and ages, who were encouraged to share a personal story about “the grand love that changed their life.”

As they enter Redmoon’s gargantuan Spectacle Hall, Winter Pageant guests will be transported high above the cloud line to the tip of a glacier, which has transformed Redmoon’s massive space into a world of ice, snow and northern lights. Spectators are invited to watch the spectacle from the bleachers or find a seat on the snowy white “lawn.” Guests who arrive early can enjoy treats and participate in an art activity and, most importantly, gather 30 minutes before the show to learn a song or dance and perform an original moment in the show. Kids of all ages – yes, this includes excited adults – are invited to join the 40 performers in the show to create an original fable for and by the people of Chicago.

And after the show, families are invited up onto the glacier to enjoy desserts and snacks with the cast and crew, see the massive, intricate set in more detail, and learn more about the puppets and objects used in the production – a Redmoon performance tradition beloved by all.

About Winter Pageant 2014 Artists
Aerial Dance Chicago (ADC) is a nonprofit organization dedicated to creation, performance and instruction in the field of aerial dance. Incorporating apparatuses such as suspended fabrics, bungee cords, hoops, bars and ropes, the company delves into the expressive potential of multi-dimensional space, transcending assumed limits of dance. ADC invites people of all ages and ability levels to experience the athleticism and artistry of aerial dance through its community classes and workshops. Experienced professionals teach the classes, with a cutting-edge curriculum designed to progressively lead students through the exciting challenges of aerial dance. From preschoolers to teens, and young adults to senior citizens, ADC’s classes provide a fun and creative way to build fitness, coordination, creativity and confidence. Get full class details at www.aerialdancechicago.org.

After School Matters provides Chicago high school teens with high quality, out-of-school time opportunities to explore and develop their talents while gaining critical skills for work, college and beyond. Over the past two decades, more than 200,000 teens have participated in ASM’s hands-on, project-based after-school and summer programs in the arts, communications, science, sports and technology. Programs take place at locations throughout the city including Chicago public high schools, Chicago Park District and Chicago Public Library locations, community-based organizations and downtown at the Gallery 37 Center for the Arts. Lear more about After School Matters here.

The mission of Chicago West Community Music Center (choir and harp) is to harness the creative potential of individuals through education to inspire artistic and cultural expression to foster positive relationships across neighborhood lines. The activities presented by CWCMC have a unifying effect on the community, as residents from neighboring communities build healthy relationships sharing common interests. The teen choir accompanied by live musicians is a program where students learn the business aspect of the industry along with the techniques of professional performance made possible through an After School Matters Program. Learn more about CWCMC here.

Redmoon Winter Pageant Dance Collective. Comprising individuals with different histories, cultural backgrounds and residences in the City of Chicago, the collective has one common thread that ties them together: dance. Redmoon’s Winter Pageant dance group is a collective of performers, arts educators, army brats, competitive dancers, military service personnel and individuals who just enjoy dancing. An all-star cast of established and upcoming dancers in the Chicago dance community, the Winter Pageant Dance Collective has more than 100 years of collective experience as dancers and movement artists from various crews including Awesome Style Konnection, Goddistas, Digital Natives and Alkeny. Among them, the dancers are adept at 13+ styles/genres of dance and movement including House Dance, Breaking, Poppin, Krumping and Locking.

Katrina Flores (co-director) has been working with Redmoon since May 2014. She was honored to work in collaboration with community partners on Summer Celebrations in Chicago parks and community organizations across the city with Redmoon. She is a visual artist, dancer and performer. She is also a Hip Hop cultural tradition bearer and community organizer. She has performed and taught through dance and spoken word across the US and internationally in Hong Kong, Nicaragua, Panama and The Philippines. She is currently pursuing a Masters in Curriculum and Instruction looking at teaching and learning practices in the Breaking Community and is the Co-Director of Breakin’ The Law: International Festival of Urban Movement.

Jillian Gryzlak (art director, co-creator) has worked with Redmoon in varying capacities since 2006: as an artist builder creating steel headdresses to hold fire; as the costume designer for Once Upon a Time or the Secret Language of Birds, Last of My Species and The Elephant and the Whale; and as a teaching artist with DramaGirls. In 2013, Jillian joined the staff, and now, as the Education Programs Curator, she manages artistic internships, job training programs within the metal and wood build shops, oversees an Apprenticeship program that provides one-on-one training, and residency programs within schools. Other Redmoon projects include object design and construction for the Golden Truffle and guiding the curriculum and design for The Great Chicago Fire, a book written by Tria Smith and gifted to more than 30,000 third graders across Chicago in partnership with Weigl Publishing. Learn more about Jillian here.

Jeremy Jacobsen (score) has been an active composer and performer in the Chicago region for more than 20 years. Equally adept on keyboard, stringed and percussion instruments, he has lent his unique musical perspective to myriad projects that have garnered national attention. His one-man band project The Lonesome Organist has toured across the United States, Canada, England and Japan and has released several albums. Learn more about The Lonesome Organist here.

Frank Maugeri (co-creator, Redmoon Producing Artistic Director) is a large-scale public art Spectacle-maker. His primary work focuses on transforming streets, parks and landmarks into events that culminate in shared experiences of enormous celebration. For the last 19 years, Redmoon has been his artistic home. Over the course of his career he has served as a director, co-director, producer and designer of many Spectacle productions and events including the creation of The Cabinet, Redmoon’s longest-running show, the direction of The Astronaut’s Birthday, a large-scale animation graphic novel projected on the MCA’s façade, seven of the famed All Hallows Eve ritual celebrations in Logan Square, more than a dozen annual family-friendly Winter Pageant performances and civic-focused events such as Redmoon’s Halloween Spectacle performance at the White House. Recipient of the prestigious NEA/TCG Career Development Award for Directors, he has served as speaker, instructor and guest artist to TEDX, Gallery 37 and Project LEAP, among others. Learn more about Frank here.

About Redmoon
Redmoon's mission is to transform the experience of Chicago through free large-scale theatrical events that promote community, creativity and an empowered democracy. Redmoon burst into Chicago’s cultural consciousness with its award-winning production of Moby Dick in 1995. While the indoor productions continued to receive critical acclaim and popular support, Jim Lasko chose to focus the theater’s energy outdoors, where Redmoon sought to deploy spectacle to bridge difference and transform the ways that people see and understand public spaces. Over the past 24 years, Redmoon has become a highly valued Chicago institution with its high-profile collaborations, vibrant outdoor performances and authentic community partnerships. In 2009, Lasko joined forces with long-time collaborator Frank Maugeri to co-lead Redmoon as it garnered international attention for its unique productions, site-specific performances and participatory events. Since 1991, Redmoon has performed for more than 350,000 people in 49 different neighborhoods in 186 public spaces.

For more information on Redmoon and its programs, visit www.redmoon.org.
Posted by Bonnie Kenaz-Mara at 2:23 PM