Act Out-Rhino Fest, Dare to Dream, this is a DAMAGE MANUAL

Check out their complete listing of offerings at their main site.   We hope to catch Barrie Cole's show, I Love You Permanently,  running every Friday at 7pm through February 10th.   I spent an evening with Barrie, accomplished playwright, actress and Chicago Mom of two, after the opening of Hunchback Variations (amazing and highly recommended BTW) and she was a hoot.    I've seen her work off and on for years--I think the first show was a one woman monologue in The Wicker Park Field House about 15 years ago.   Yet somehow we'd never officially met.   I'm intrigued to see her current production.   She said she'd be up for a video interview, so hopefully we'll have that for you soon, too.
We've also known Ian Belknap for years, and had hoped to catch his show this Saturday, but alas, we'll be shooting Badfish/Midwest Hype instead.   If you don't win our free tickets to Badfish or the HOB show sells out, consider Ian's show a worthy alternate plan for an adult night out.   Uncle Dad is Ripshit, You Guys
is culled from Ian's best solo work "from the past year or so".
chiIL Mama
because life doesn't end with birth.........
We love to feature Chicago parents doing their creative thing and making vital theatre, art, and music and juggling the complicated chaos of being a parent 24/7 and not losing yourself or your creative vision.    Check out our ongoing original video project on "How Do Creatives Parent and How Do Parents Create" on our Pinterest Boards here.
Opening 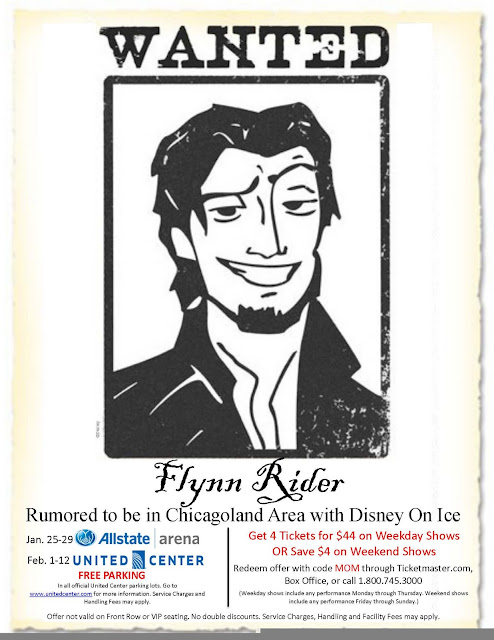 Disney on Ice Dare to Dream-United Center Feb 1-12
We've already picked our winners, but you can still get in on the ice princess action (and see a plethora of bulbous bouffants!--click the link above for our past coverage if you're confused or eager to be amused).  We'll be at the show tonight and have more photo filled coverage for you soon.  We still have a sweet discount for you with the code word MOM-see details under Flynn Rider, hottie scoundrel, above. 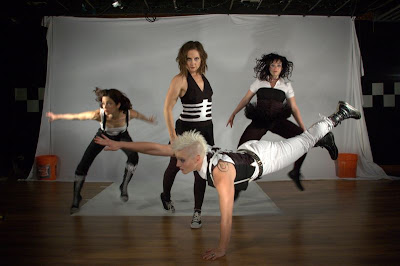 
BONEdanse PRESENTS This is a DAMAGE MANUAL THIS WINTER. WHERE THE SUB-TRASH PROPAGANDA OF THE 80S CLASHES WITH THE FEAR OF EVERYTHING 50S WHERE THERAPY PROMISES TO HELP, BUT MORE OFTEN DESTROYS... WHAT’S YOUR DAMAGE?
We'll be there opening night and have a full review up for you ASAP.
BONEdanse’s (simplified from its former Breakbone DanceCo), evening length version of This is a Damage Manual premieres this February; a satirical, witty, and humoured performance that offers as many absurd questions about the idiosyncrasies of human behavior as it answers.
With its title sourced directly from the industrial post-punk music entity The Damage Manual featuring 80s punk era icons Martin Atkins (Public Image Ltd [Pil], Killing Joke), Chris Connelly (Murder, Inc), Geordie Walker (Killing Joke) and Jah Wobble (PiL), BONEdanse’s Damage Manual, also draws largely from the world of vintage instruction manuals and self-help vinyl records to explore how universally damaged we all are and how many of us stay that way. 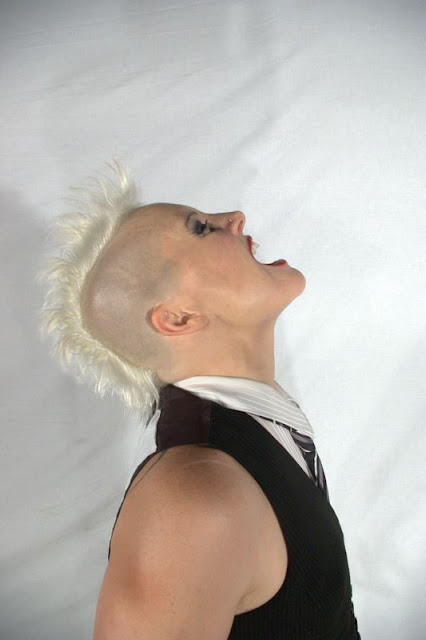 Damage Manual combines Director Atalee Judy’s signature ferocity and aggressive physicality with process-driven choreography wherein Judy and the dancers culled movement from a range of Do-It-Yourself Fix-It books, safety operation guides, and Judy’s earliest dance notations in binders (circa 1994). A build-up to the performance, this summer’s Danse Skitz, 12 weeks of online video shorts produced by BONEdanse, featured site- specific and often comedic performance, introducing four performers on a spontaneous journey to discover, adapt and to have a little fun while building on their personas (some personas will be implemented in the show).
Damage Manual will run for 2 weeks February 2-12 at Theater Wit with performances on Thursday, Friday, and Saturday nights at 8:00pm and Sunday afternoons at 3:00pm. Theater Wit is located at 1229 W Belmont, Chicago, 60657 in Chicago’s Lakeview neighborhood. Enjoy a drink at The Wit Bar and stay after the performance to hang out with the artists in the theatre for an after show reception with hors d’oeuvres.
Ticket prices are Thursday/Friday $15, Saturday $24, and Sunday matinee $20. ALL tickets are available at walk-up or call-in box office: 773.975.8150 (no service fee charges for online or phone purchases) or ticketing online at www.theaterwit.org.
Follow BONEdanse on Facebook at www.facebook.com/bonedanse or join their email list for discount ticket offers at www.bonedanse.com
The world is a big hot mess. Everyone is bracing for an emotional meltdown of some sort or another. So maybe now is the best time to look back to the days when things were simpler and easier to manage. It's time for some good ol’ fashioned wisdom. Now, we can't be the ones to give you that advice. We just don't have the chops. But we have found some people who can. Their names are from a forgotten treasure trove of 1950s era motivational, self-help, and spoken-word records. Names like the hypnosis guru Dr. Murray Banks, the smooth talking, slightly condescending Earl Nightingale, and the “just take another tranquilizer” women’s stress disorder advocate Dr. Beverley Weeks to name a few...and they essentially wrote, and offered the topics for, the Damage Manual. And we listened.
The edgy and in-your-face style of Breakbone is nuanced with an irreverent spin in this new work by the newly honed BONEdanse. Changing the company name and logos was in part due to personal changes in Judy’s life as well as a desire to not be categorized by her own established political and aggressive style of the 14-year old Breakbone. Judy’s creations have always delved into the darker territories of the mind and have often jumped off that ledge, but with Damage Manual, the introspection embraces the absurd, non-sequitur and humorous side of the psychological state of a desperately-seeking-to-be-helped mind and its potential for perilous consequences and/or the epiphanies found within.
Atalee reflects, “Considering today's headlines, this is an extremely timely work. Damaged minds, environments, relationships and even the breakdown of language take its toll on us. We have to either fix what’s broken or learn to live with it. I mean really, aren’t we all damaged and just getting by as best we can? Is there a fix? Hypnosis, meds, therapy, self-help... the list is endless and we become so desperate to do whatever it takes to remedy our situations.”
Along with Judy, BONEdanseur vets Mindy Meyers and Anita Fillmore, with the recent addition of Janna Barta, embody the frustration of attempting to repair what’s broken, often with mixed results. Utilizing the premise of stereotypical medical hypnosis to fix what ails you, the performers take on personas to reveal the delusional, anxiety ridden, iconic monsters hidden in all of us to create moving dichotomies. Other stereotypes are utilized as well, ranging from germaphobic cleaners to a dysfunctional ballerina, from a sick dictator to a stressed out housewife. The latter which is reflected in a solo, The Woman Who Had It All, set on Mindy Meyers by former Breakbone company member and hysterical performer about town Jyl Fehrenkamp.
Atalee comments on the tone of the new work, “The movement is not angsty aggressive, but I admit it’s bold, assertive, and manipulative – a lot like how mental illness and therapy has been dealt with throughout the decades. It’s about change being frustrating, hard, and funny in a dark biting way. Sometimes we need to be pushed, coerced, or repeatedly corrected – and this can make and/or break people to change their habits or give up on the whole thing all together. Good or bad? Who am I to decide... but manipulative tactics are found as far back as Hippocrates to Freud to Dr. Phil in an attempt to ail the damaged mind – we’ve just been inspired to call it as we see it, have some fun while doing it, and put it into a dance.”
Once again, here's the basics:
WHAT:  Damage Manual, a darkly comedic dance theater work examining vintage self-help books and recordings through dynamic physicality.
WHO: BONEdanse. A solo created by guest choreographer Jyl Fehrenkamp Choreography by Atalee Judy with performances by Janna Barta, Anita Fillmore, Atalee Judy & Mindy Meyers. Lighting Design: Jacob Snodgrass Costumes, Video, and Soundscore: A. Judy
WHEN: Thursdays-Sundays, February 2, 3, 4, 5, 9, 10, 11 and 12; Thursday, Friday and Saturday performances at 8:00 pm, Sundays at 3: 00 pm
WHERE: Theater Wit is located at 1229 W Belmont, Chicago, 60657 in Chicago’s Lakeview neighborhood.
HOW: Ticket prices are Th/Fr $15, Sat $24, and Sunday matinee $20. ALL tickets are available at walk-up or call-in box office: 773.975.8150 (no service fee online or by phone) www.theaterwit.org Follow BONEdanse on Facebook and join their email list for exclusive discount ticket offers at www.bonedanse.com
Check out their main site here for more photos/ details. 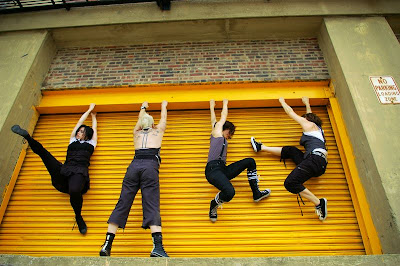