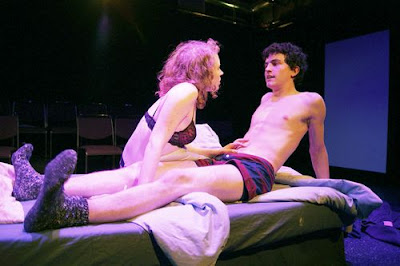 "the question, the choice, the question the choice....." Olivia Dustman and clancy McCartney in the opening scene of "dark play or stories for boys" by Carlos Murillo (photo by Cesario Moza)

We had a chance to check out this macabre and thoroughly engaging play on Thursday.    Highly recommended.   Collaboraction has again brought an amazing Chicago premier to audiences.   Dark Play is an edgy, disturbing and multilayered mind game where the lines blur and distort between fantasy and reality.   It's a modern day cautionary tale for times when every tween has ready access to cell phones, web cams and computers.   It's a twisted sex and gender bending saga, full of webs of lies and lies on the web, that rival Shakespeare's classic twists of mistaken gender identities.    The creativity and intelligence of the 14 year old protagonist are only rivaled by his self destructiveness, loneliness and revenge/humiliation fantasies.  Dark Plays or Stories for Boys is based on a true story of a British teenage boy who "ventures down a dark path into the virtual world" as reported in "Vanity Fair", February 2005.


This powerful piece works on so many levels.   Note, although the main character's story occurs at age 14, mature adult themes of sex, violence, and homosexuality are presented on stage, so parents are strongly cautioned to see the show first or at least do the research before bringing teens, and this is definitely not a show for younger boys (or girls).    Also consider, if an older child can conceptually handle the material, would they be mortified to be seeing a mature themed show with their parents?    Still, it's an excellent, eye opening story that would leave a lasting impression on older teens in a way that lectures about sexting and internet predators and peers just don't.   If you choose to leave the kids at home, this is still a highly recommended, must see, for parents and other adults.

We went straight home after the show and put the parental controls on all the lap tops, even though our 10 year old is still happily playing Club Penguin, Moshies, and Webkin World!  The show touches on a vital conversation that needs to be broached with tweens these days.  There are plenty of bored, vindictive and predatory kids and adults on line who are not who they say they are and are happy to invent Dark Stories, where only some of the players know all the rules and the end result is potentially dangerous.    Kudos to Collaboraction for mounting this intense drama in such a tasteful and compelling way.

We know more than a couple of parents who thought their tween boys were still innocent "children", who found out the hard way that their kids were growing up.   Their hard drives were irreparably fried by viral nastiness from their children's virtual explorations.   At least computers are more irreplaceable than gullible kids who fall prey to on-line creeps.   There's a lot more at stake today, with on line experimentation, and enlightening the innocent is a necessary evil.


I will say, though, we knew a group of guys who worked on Insomniac with Dave Attell, who successfully pulled off a complex dark play of their own on another adult coworker.   They had her going for a while with a fictitious relationship with a band boy.   It's a bit more forgivable since all the parties were adults and friends....but it makes me think twice about believing anything personal that doesn't occur face to face.

Dark play or stories for boys follows a teenage boy’s foray into the virtual world. His fictional internet identity begins as a harmless game, but the game takes on a frightening reality when real emotion overtakes his online relationship. When Nick’s virtual world collides with the real world, his fantasies of love, intimacy, obsession and betrayal spiral into consequences that lead him to the brink of death. Dark play or stories for boys was first produced as part the Humana Festival at Actor's Theatre of Louisville. Murrillo is the winner of National Latino Playwriting Award (2006) and the Otis Guernsey New Voices in American Playwriting Award at the 28th annual William Inge Theatre Festival. Murillo currently serves as the Head of Playwrighting Program at The Theatre School at DePaul University.

Aaron Kirby (Adam) is thrilled to be making his Collaboraction debut.  He most recently appeared with the House Theatre in Cyrano.  Other Chicago credits include:  Entertaining Mr. Sloane (Project 891), Much Ado About Nothing (Chicago dell’Arte), A Christmas CARL (Chicago dell’Arte), Vaudeville (Cold Basement), Spectacle Lunatique (Redmoon).  International: The Girl of 10,000 Smiles (Edinburgh Fringe).  He also holds an MFA in Acting (Wayne State).

Clancy McCartney (Nick) comes to you from the foggy shores of San Francisco, and is proud to make his theatrical debut with Collaboraction Theatre. A recent graduate of The Theatre School at DePaul University, he would like to thank his family, Daniela Colucci, and everyone else that’s helped get him here.

Jane deLaubenfels (Female Netizen) is thrilled to be working with Collaboraction.  She appeared in the Jeff Award winning production of Man From Nebraska at Redtwist Theatre last Spring.  Jane has also worked with Provision, Stage Left, American Theater Company, Buffalo Theatre Ensemble, and City Lit, among others.  This May she will be performing with the storytelling collective, 2nd Story.  Jane lives in Lincoln Square with her husband, Jamie, and their children, Alice and Gabriel.

Olivia Dustman (Rachel/Molly) originally hails from Salt Lake City, Utah and is a recent graduate from DePaul University with her BFA in Acting. At DePaul she performed in; Holes, Four Twins, Inky, The Skriker (Lily), A View from the Bridge (Catherine) and Medea.  She made her professional Chicago theatre debut in Summer and Smoke at The Den Theatre and played Nellie in that production. After Dark Play, Olivia will be playing one of her dreams roles; Juliet in Romeo and Juliet with Glass Onion Theatre and will also be working on Pride and Prejudice at Lifeline Theatre. Olivia is super excited to be a part of this amazing ensemble and is thankful to everyone who has supported her in her dreams! 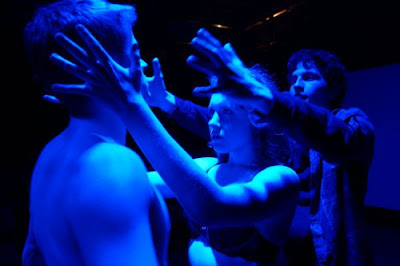 The verdict is in! Chicago loves "dark play." The show has opened to enthusiastic responses from critics and audiences alike:
Chicago Sun-Times - "...as disturbing as it is powerful..."
Chicago Theater Beat - "...a simultaneously repellent and ultra-compelling saga.”
Around the Town Chicago - "...the acting is strong as is the direction..."
Chicago Now - "Amazes and dazes!"
Chicago Critic - "...a worthy journey into the potential power of the Internet..."
Centerstage - "Collaboraction's production is...top-notch."
Newcity Stage - "...a deeply felt Chicago premiere."
Chicago Reader - "...compelling...a thrill.”
TimeOut Chicago - "surprisingly packed and active...a digital dreamscape."
WBEZ Dueling Critics Audio Review - "...this is why Chicago theater is the best in the country."

And here's a handful of audience member reactions to the production:
"This is an incredibly well produced and intense play. With simple and clean scene changes, with minimal fuss, the world of a lonely teen is presented graphically. There is drama, humor and intensity in every scene, and the young cast brings it off beautifully. It's one of those rare pieces that takes you on a journey with surprises around every corner. Do yourself a favor and see this play in this tight production in an intimate setting. You'll love it." ~"John" on goldstar.com (5 out of 5 stars)

"A pretty intense experience...really well acted, staged, and directed. The venue is also a terrific place to see a play." ~"Goldstar Member" on goldstar.com (4 out of 5 stars)

"Dark Play is not an easy ride, although it is a worthwhile one...See this jarring and disturbing wonder." ~"Goldstar Member" on goldstar.com (5 out of 5 stars)

Check out video clips of scenes from the show here. 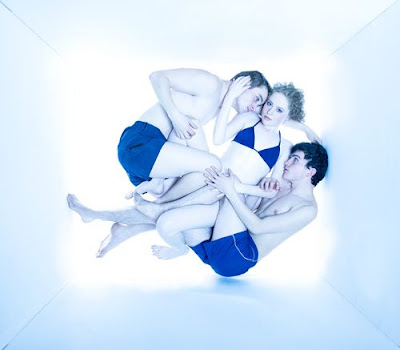 Collaboraction is proud to announce that this February we will be a part of the groundbreaking public project "Luminous Field," a site-specific, audio-visual installation in Millennium Park. The Chicago-based artistic ensemble Luftwerk will transform the plaza "into a digital canvas of light and geometrical form" reflected by the Cloud Gate (aka "The Bean") and set to music composed by local Third Coast Percussion member Owen Clayton Condon.

On February 10th and 17th at 7, 8 and 9PM, Collaboraction will present a 5-minute choreographed performance followed by interactive games inspired by the installation. Even better, the event is FREE. Please join us for this exciting citywide celebration of art, technology, and performance! (We encourage you to dress in white in order to take full advantage of the projected environment.)

Check out the photos below of Collaboraction performer Nathaniel Card rehearsing in preparation for Luminous Field: 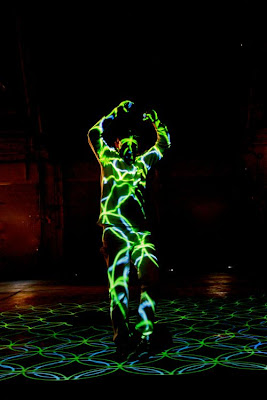 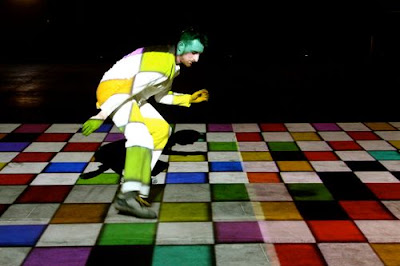 CONSIDER A DONATION TO COLLABORACTION'S 300 CAMPAIGN TO CREATE A SECOND COLLABORACTION PERFORMANCE VENUE IN THE FLAT IRON ARTS BUILDING.
Posted by Bonnie Kenaz-Mara at 2:22 PM