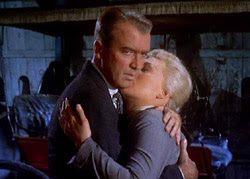 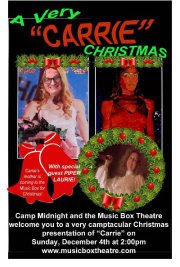 Are you fa la lahed out with the holiday cheer already.   Check out two of our favorite repertory theatres for your own nightmare before Christmas with Vertigo and Carrie.    Hitchcock's Vertigo plays at Facets Multimedia this morning at 11am, with a special guest appearance of Chi-Town's own mystery writer, Sara Paretsky.
Sara Paretsky, acclaimed author of detective fiction, and James W. Anderson, professor of psychology at Northwestern University, will join us to discuss one of Alfred Hitchcock's most powerful, deep, and stunningly beautiful films. Starring Kim Novak and James Stewart, Vertigo is a film noir that functions on multiple levels. A box-office failure on its release, it is now considered one of the greatest films ever made. Don't miss the chance to see it in a 35mm print.
New 35mm Print and Special Film Dialogue
Hitchcock's Vertigo

Showing this Sunday, December 4 at 11:00 am
$10 general admission - FREE for Facets Members!

Then at 2pm, head over to Music Box Theatre for a special showing of Carrie.   I have a soft spot for Carrie since I played the part in a huge, local haunted house for two years, back in the day.   It was so much fun making drawers fly out and cabinets bang open and closed with my mental powers, while donning a bloody prom dress nightly.   Fun times.
Music Box Theatre and Camp Midnight are very pleased to present a one-of-a-kind screening of the infamous 1976 horror film CARRIE their first ever horror/camp screening. A portion of the proceeds will go to Hell in a Handbag Productions, Inc., the theatre company noted for their one of a kind theatrical parody shows, including a hit musical version of Carrie, called “SCARRIE The Musical” that debuted in 1998 and was revived in 2005.

The event begins at 2:00 pm with a Camp Midnight pre-show hosted by Dick O'Day and featuring David Cerda, Artistic Director of Hell in a Handbag Productions and two of the troupe’s hilarious acting mainstays, Ed Jones and Alex Grelle. The pre-show will include a “scary Carrie” costume parade (with “horrifyingly” good and prizes), sing-a-long at the Music Box organ, and much more. Then Brian DePalma’s thrilling 1976 teen horror classic CARRIE will be screened, complete with “frighteningly funny” interactive audience guide and “hellaciously hilarious” running commentary from O’Day and Cerda.

Finally, when the venomous Chris Hargenson (Nancy Allen) engineers a reprehensible prank at the school prom, Carrie lashes out in a horrifying display of her heretofore minor telekinetic powers. Many films had featured school bullies, but Carrie was one of the first to focus on the special brand of cruelty unique to teenage girls. Carrie's world is presented as a snake pit, where the well-to-do female students all have fangs -- even the reticent Sue Snell (Amy Irving) -- and all the males are blind pawns, sexually twisted around the fingers of Chris and her evil cronies.

The talented supporting cast includes John Travolta, P.J. Soles, and William Katt. One of the genre's true classics, the film was followed by a sequel in 1999, as well as by a famously unsuccessful Broadway musical adaptation that starred Betty Buckley, the movie's gym teacher, as Margaret White.~ Robert Firsching, All Movie Guide
Posted by Bonnie Kenaz-Mara at 10:23 AM