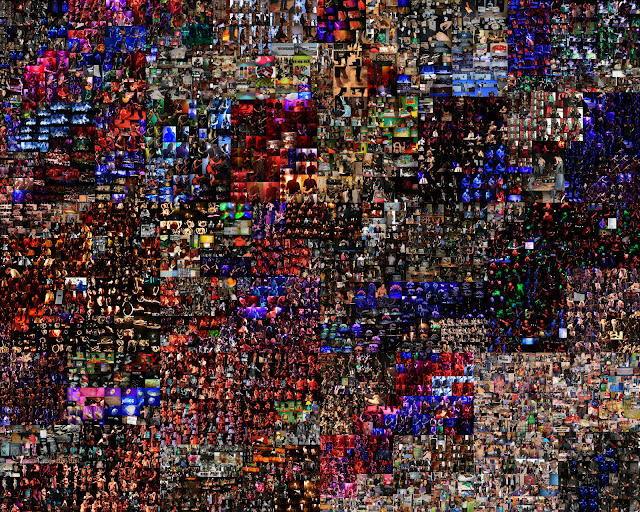 2011 was pretty sweet, and we've got so many original band interviews, still show shots and live concert footage that we'll still be editing and posting into the new year.   We also have a zillion awesome games and toys, kindie CDs and rock DVD's we'll be reviewing in January.

No family members were born or died, except our sweet dog, Alia Serendipity, who was ready to go at age 16.  My mom had her gallbladder removed, but it was a quick recovery.

We took the kids to Universal Orlando & Disney World for the first time.
ChiILMama.com took off at a gallop and it was so much fun to cover
all the Broadway in Chicago Shows, a ton of Chicago theatre for kids and adults, summer festivals, live music, and more events than I can remember.

We launched ChiILLiveShows.com and had press passes to shoot pit photos at Lollapalooza, North Coast Music Fest, Summer Camp Music Fest, The Bluegrass and Blues Fest, Riot Fest and a ton of concerts of all sizes.
Highlights were Shooting Congress Shows like:   Primus, The Pogues, Clutch, Dropkick Murphys, Dead Milkmen, Grace Potter, Edward Sharpe and the Magnetic Zeros and many more.


Jane's Addiction at Metro was a huge highlight to shoot.   The shows sold out in seconds and very few members of the press got to shoot it.

It was also a huge highlight interview Keller Williams at Park West and see both his kindie show by day and his adult show at night.   We also reiewed and ran a bunch of give aways for both his new Kids album and hardback book/CD combo.

We also shot a ton of great shows at smaller venues including:


We also got to video interview Fitz and The Tantrums, Keller Williams, The Verve Pipe, & Red Fang, along with numerous kindie artists like Suzi Shelton (who played the white house), Ralph Covert (with a cameo by Tor Hyams-Lollapalooza/Kidzapalooza Co-Producer), and a bunch of our own Chi-Town Windie Kindie musicians like Little Miss Ann, The Boogers, and Mr. Singer.


We also got some great theatre video interviews at Adventure Stage and Chicago Children's Theatre and with the infamous Dixie Longate of Dixie's Tupperware Party Show fame.

Dug continued to travel the world for work, with Dug Production Sound, Inc.  He made it abroad to Uruguay, Puerto Rico, Honduras, and all over the states in 2011, providing location sound for a number of TV shows.

From our family to yours,

Email ThisBlogThis!Share to TwitterShare to FacebookShare to Pinterest
Labels: 2011 recap