Marbles: The Brain Store is one of our favorite places to find unique, brain building toys and games for all ages.   Check out ChiIL Mama's video interview with founder and CEO, Lindsay Gaskins, at the opening of their Water Tower Place store, earlier this year.   She's a Chicago Mama who is committed stocking her stores with high quality, educational products.

Check out Family Finds today only, via this link
$25 for $50 worth of brain-building games, puzzles and more at Marbles: The Brain Store Online!Nationwide | Marbles the Brain Store

Sure, Marbles: the Brain Store has grown up into a nationwide chain, but they've retained their neighborhood toy store feel, instead of an impersonal big box conglomerate.    Their plentiful, wooden toys are gorgeous as well as fun.   And here at ChiIL Mama we're all about toys and games that "grow your brain".   What better gift can you give a child of any age or an adult, too, for that matter, than a fun, playful way to exercise your melon?

Du-Jay, Sagezilla and I had a blast at Marbles' holiday toy preview party at their 55 E. Grand location, in Chicago.   We met numerous toy inventors, including Peggy Brown (whom we hung out with again at ChiTAG-Chicago Toy and Game Fair), Ryan Jedlicka & Joel Lueders.    We also met Chief Merchant Officer Scott Brown and spoke with CEO Lindsay Gaskins again (off camera this time).


Here's the lowdown on their “star” product inventors we had the pleasure of meeting: 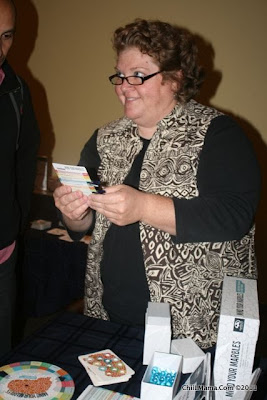 Peggy Brown:  A highly-respected game inventor who is well-known in the industry, Ms. Brown has created hundreds of products that have been mass-produced and marketed worldwide for companies including Disney, Nickelodeon and Warner Bros.  Brown has developed Mind Your Marbles and Mindstein for Marbles: The Brain Store.

*The kids were elated to see her again at ChiTAG.   We even got her autograph on her Top Trumps inventor card and made silly hats with her at a press event.   Peggy's brilliant, personable, and wickedly creative and has invented a mind boggling number of games!   Check 'em out at her site right here. 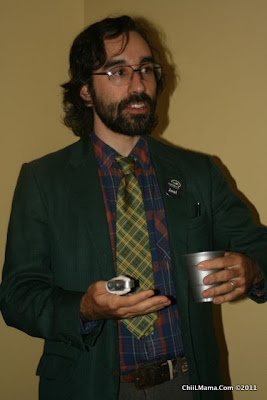 Joel Lueders:  Sometimes untapped talent is right under your nose.  Based in Minnesota and employed as one of Marbles’ esteemed BrainCoaches, Joel’s artistic talent was discovered at an employee party.  As a result, he developed unique and creative illustrations for the new Marbles U.S. Map Puzzle.

*The kids were so stoked to meet someone who draws monsters for a living!  As a Montessori family, it was an extra bonus for us, to find out he was Montessori educated.  Check out his website here.   And we recommend his states game as a map puzzle so funky and fun, the kids won't notice how much they're learning! 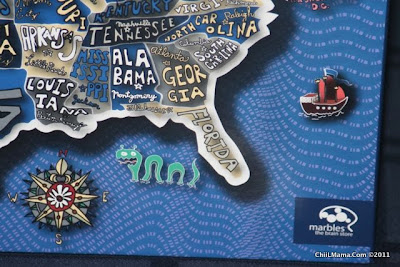 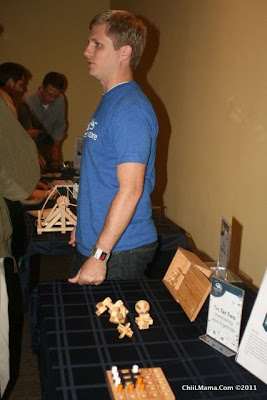 Ryan Jedlicka:  After several anonymous entries were showcased for voting in a recent Facebook competition for the next great game, one of Marbles’ very own came up with the winning idea:  Lutso.  Of all the entries, this wooden critical thinking game was voted as the product that game fans want to see the most on shelves this holiday season.

* We thought Lutso was pretty genius, too!    We don't have it, but it's on our holiday wish list.   That's another cool thing about Marbles.   The staff is brilliant.   They're happy to play games with you, they're knowledgeable, and quick with creative gifting ideas.   You won't be waited on by some high school drop out just phoning it in.   You might be helped by the inventor or artist on the next big game! We won Blurt! and Stomple in a blogger lottery, at The awesome Brands and Bloggers Summit.   They were part of an incredible $250 tower of games from ChiTAG.   We've been thoroughly enjoying both and highly recommend them.   We played Blurt! with 3 generations of our family and laughed for hours.   Stomple is wooden, award winning, and a wicked fun strategy game.   Click the links for further descriptions about game play, pricing, etc.   All are available at Marbles. 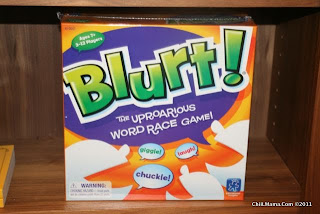 Marbles says:  Think fast! What word means "a partially dried grape"? Be the first to say "raisin," and you're on your way to winning this riotous game of rapid word recall. Players take turns reading clues aloud, competing to blurt out the correct answer first and move ahead on the board. The first person or team to circle the board wins. Sounds simple, right? But as the race for the right word heats up, and the blurting gets boisterous, it's easy to get tongue-tied! Blurt is a great vocabulary builder for kids, a hilarious addition to adult parties, and a must for family game night.

"Blurt tests your vocabulary and word processing skills. The hippocampus is likely engaged when you retrieve words that correspond to verbal clues, and speech production and comprehension areas of your brain will also be strongly involved as listen to and speak the correct answers in response to the clues." 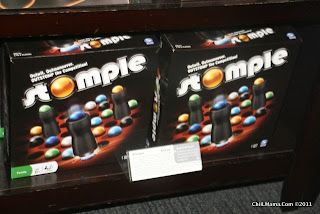 Marbles says:  First off, the game Stomple uses marbles. So naturally, we were inclined to like it. But on top of making good use of our namesake, Stomple is also fun to play, looks sharp and does a heckuva job of exercising the cerebellum. The object of this simple abstract strategy game is to outwit your opponents by stomping their marbles before they stomp yours. The player with the last stomper on the board wins the game and takes home the utterly invaluable prize of enhanced critical thinking skills and a beefier frontal cortex. Trust us on this one, that's much better than taking home a ribbon or a trophy. 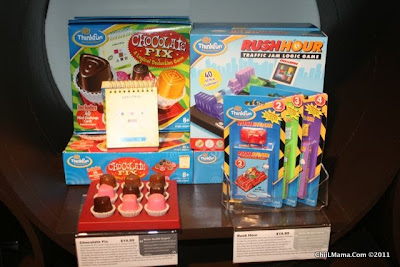 Chocolate Fix and Rush Hour from Think Fun are also on our Holidaze Wish List.  We don't own them yet......Santa, ya hear that?!   But Sagezilla has Rush Hour in her school classroom and we've all played both at Marbles, Cat & Mouse Game Store and ChiTAG, and LOVE them.
Marbles says:  The owner of the candy shop put you in charge and the customers are very persnickety about how you assemble their chocolate assortment. It’s up to you to decode the clues on the challenge card to figure out where each type of candy should be placed in order to keep the customer happy. Chocolate Fix is a Sudoku-like game of clues with levels ranging from beginner to expert.
2 Review(s)

"I use this to introduce the idea of breaking problems into smaller problems. I love how it teaches you to use thinking skills to show combinations and solutions." -Teacher
Marbles says:  This multi-award winner is one of our bestsellers. Perhaps it’s the fun of setting up the game board based on pictures of traffic jams and then plotting your escape as you slide cars and trucks out of the way. Or maybe it’s because Rush Hour looks like a kid’s game but it’s challenging to even the best adult puzzlers. Whatever the reason, this world-renowned game will rev up your concentration, spatial awareness and sequencing abilities. Now if only your morning commute was this mentally rewarding and fun.
2 Review(s)

"Improve your concentration as you engage your occipital lobe keeping track of different colors; exercise your parietal lobe to modulate spatial awareness."
For ordering info, store locations, and product details, check out www.marblesthebrainstore.com

We'll be posting a ChiTAG icon next to ChiIL Mama's Holidaze Wishlist items seen at ChiTAG.    We saw Marbles:   The Brain Store's own CEO, Lindsay, and her walking brain in Chucks hi-tops mascot there, in person.   We also saw Blurt, Stomple and Think Fun representing.   And Ms. Peggy Brown was a celeb there.   She was in demand, with booth appearances and game signings all over the fair!
Posted by Bonnie Kenaz-Mara at 4:02 PM