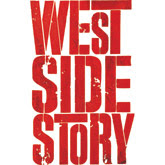 On Sale Now
as part of the 2011 Season Series!
We can't wait to check out opening night, tonight!   Sagezilla and I are going to have a Broadway in Chicago girls night out at the theatre.    We'll have a full review up for you tomorrow.    It's hard to believe West Side Story is over 50, and still such a timeless and timely tale.   Just because something's old, that doesn't make it a classic, but West Side Story is just that.    Don't miss your chance to see and share this amazing production.   West Side Story is only in Chicago through August 14th.
More than fifty years ago one musical changed theater forever. Now it's back, and mesmerizing audiences once again. From the first note to the final breath, West Side Story soars as the greatest love story of all time.
Directed by David Saint, using Tony Award-winning librettist Arthur Laurents’ Broadway direction, West Side Story remains as powerful, poignant and timely as ever.
The new Broadway cast album of West Side Story recently won the 2010 Grammy Award for Best Musical Show Album.
The Bernstein and Sondheim score is considered to be one of Broadway's finest and features such classics of the American musical theatre as "Something's Coming," "Tonight," "America," "I Feel Pretty" and "Somewhere."
“So exciting IT MAKES YOU ACHE WITH PLEASURE” –John Lahr, The New Yorker
Ticket prices are $32 to $95.
GROUPS OF 15 OR MORE ON SALE NOW!
CALL (312) 977-1710
Posted by Bonnie Kenaz-Mara at 10:38 AM