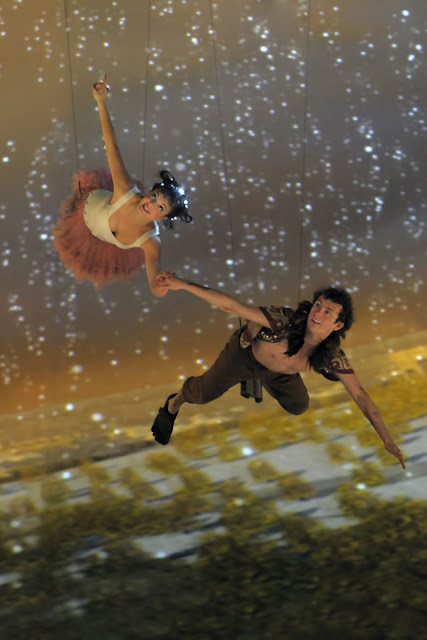 Of course, we've been raving about the whimsical, wonderful production of Peter Pan Threesixty since it opened.   We featured the show again when the run was extended, and we're happy to announce they're currently booking through August.    Check out their web site for ticket info, show times and dates, and even production video clips.


You can even take a "Neverland Pirate Cruise" to select show dates (including today 7/1), and/or a pre-show tour.   There's also an option to order a picnic before the play.

ADD TO THE MAGIC!
NEVERLAND CRUISE: Travel in style along the Chicago River to see PETER PAN, a spectacular new production based on the classic story by J M Barrie. On select nights, sail along Chicago's newly renovated Riverwalk to Neverland. Package includes cruise to and from the Freedom Center aboard Chicago’s Little Lady and price level 1 ticket to PETER PAN. Don't miss what the Wall Street Journal calls "a visually dazzling, London-born production."
Click here for the details.
INTO NEVERLAND: Begin your journey in the Pavilion, our foyer tent, and learn about J M Barrie, the story behind Peter Pan, and its 100-year theatrical and cinematic history. Take a tour of the extraordinary THREESIXTY° THEATRE. Watch video interviews with the creative team. Access exclusive information about the cast and the production, including the 360° CGI Technology. The tour is hosted exclusively by our very own cast members - Fridays at 5 pm!
Click here to buy. 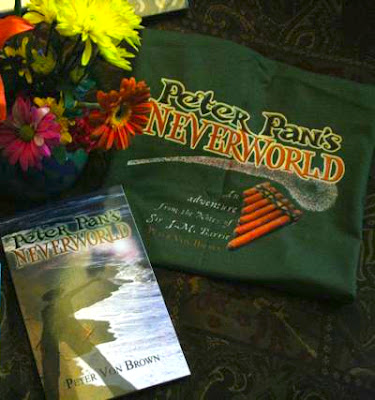 The last 2 months we've also done a tie in with Chicago author, Peter Von Brown, who has written a fabulous sequel to Neverland in the style of J.M. Barrie.    Here are our winners of signed copies of the NeverWorld book and a NeverWorld T-shirt combo.


We still have a full book review and audio interview with the author, coming up this month.  This action packed, sequel to Peter Pan, NeverWorld, is the only expansion on Peter Pan that stays true to J.M. Barrie's original.    Check out Peter's Website for ordering information.


Author Peter Von Brown had a chance to see the original mounting of this same production of Peter Pan in London's Kensington Gardens, where the original book by J.M. Barrie was set.    He even ended up there the same night as Prince Charles and Camilla!   ChiIL Mama linked to his review previously.   Despite a traditionalist bent, where he wished that Tinkerbell was depicted as a dot of light and that Nanna wasn't a puppet, Von Brown loved the show.   So did we. 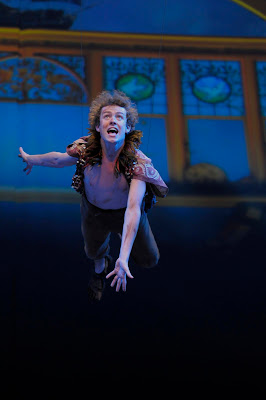 Ciaran Joyce, part of the original Peter Pan company from Kensington Gardens, is a fantastical and fantastic embodiment of the impish ruffian, Peter Pan.


We highly recommend checking out Peter Pan threesixty.    Broadway in Chicago continues their 10th season in style with this breathtaking, visual feast.    We felt more like we were on a ride at Universal Studios than in a play in Chicago.    The flying over London scenes and the under water adventures are amazing.   In fact, in a genius melding of the best of old and new, 400 square miles of virtual London, circa 1904 were rendered for the show!   The multimedia effects put the viewer smack dab in the middle of Captain Hook's pirate ship and make every audience member an integral part of the action.


We loved the human mobile effect of the major characters suspended by wires from the center of the tent.   Come experience the world's first 360-degree CGI theatre set, along with 23 actors, stunning puppets, epic music, and dazzling flying sequences.   We're hoping that threesixty entertainment does move forward with their plan to produce more shows this way. 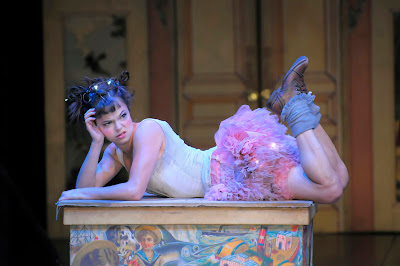 Snarky Tinkerbell was Sagezilla's absolute favorite character.   She embodied all the playfulness of a young girl, and power of a magical creature, without the hyper feminine poofyness and prissyness of the Disney version of fairies.    Emily Yetter did an excellent job being childlike and childish, yet entirely endearing, even when she was being a brat.   Of course, now my kids' new favorite expression is "You silly ass."   Thanks Tink.   Guess it could be worse.    They haven't shot anyone with arrows yet.


We also loved the fact that the mermaids were vicious, dangerous and more true to classic mythological versions and those seen in the recent Pirates of the Caribbean: On Stranger Tides.    Mythical mermaids are much more interesting when they're drowning sailors than sitting around primping.   Although I must say that the harshest critic in the family, my 8 year old daughter, declared the mermaid's silks work "weak".    I have to agree with her, though it thrilled me that we are so fortunate to live in a world class theatre city where my kids have seen truly stunning aerial arts at Lookingglass Theatre and learned how to do silks and trapeeze work themselves at CircEsteem. 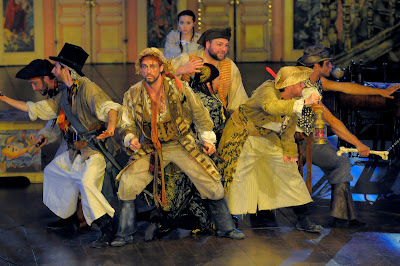 There was nothing weak about the band of bawdy buccaneers.   Pirates are always in season, on the big screen or under the big top.   We adored these Neverland ne'er-do-wells, led by the legendary Captain Hook.   Overall, the production, though non union, is well acted, and the stunning sets and costumes are worth the Broadway Theatre price tag.    This is a production adults and children will equally love, and a memorable family event that won't soon be forgotten.    Come have your own grand tent adventure, on the picturesque banks of the Chicago River, with the boy who refused to grow up and the children who love him.
Posted by Bonnie Kenaz-Mara at 2:41 PM