Sandman The Rappin' Cowboy LIVE at Facets all Weekend


Sagezilla and ChiIL Mama had a ton of fun last night at the opening of the film, Roll Out Cowboy at Facets Multimedia.   We were surprised and impressed with the documentary by local Chicago filmmaker, Elizabeth Lawrence and with Chris Sand, The Rappin' Cowboy. 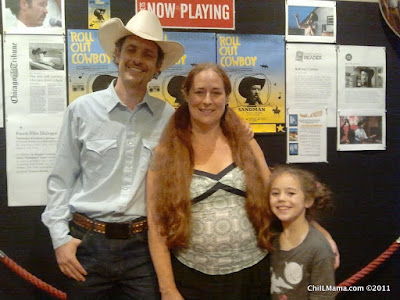 This movie is a funny, quirky look at a slice of pure Americana.   It takes the viewer into Dunn, the depressed small town in North Dakota that Chris calls home, and then beyond as we follow him on tour and into a new day job as a trucker.


We love that he was able to buy a home in Dunn for $1,000, and dug hearing about it's colorful history of 2 prior male musician owner who both killed themselves there.    Sandman plans to turn the tide of this home's checkered past with his new wife, Hana Kasm.    They're expecting a new baby Sand in 6 months.   Maybe we can expect a newbie in the kindie community, too?    We haven't seen any full sized CD, rappin' cowboy, kids' indie music yet.   Hint hint.


We don't want to give too many spoilers, but Chris has gone from wrecking an 18 wheeler full of fish on his first run, to still being gainfully employed as a trucker and producing prolifically as a musician.    In fact, his trucking partner that he tandem drives with dropped him in Chicago for his film premier weekend and will scoop him back up on his run to Canada after Sunday's show.   Sandman, the rappin' cowboy is a colorful cult character who is endearing and genuine and deserves to get noticed.


This makes for a better parents night out, but my 8 year old enjoyed it.   There is some language and minor adult themes, though nothing that would freak your kid out and scar them for life.    We happened to think the Sandman's more irreverent, wild stuff was hilarious!


And I can honestly say, he has the first merch table I've EVER seen selling pillowcases!!    You can actually rest your melon on a Sandman silkscreened pillowcase while you play his CDs.   Pretty cool.   Check him out. 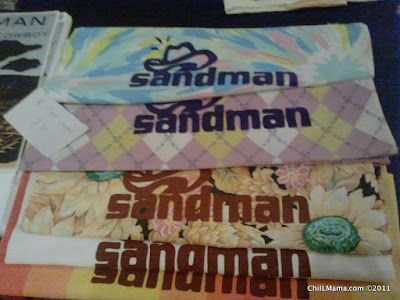 Chicago's premiere of Roll Out, Cowboy this month at Facets: runs July 22-31 only!

Buy tix here or at the door: http://rolloutcowboy.eventbrite.com/.    Last night's 9pm show was a full house.
The Rappin' Cowboy will be there through Sunday's showings (singing live songs!), along with the doc's dynamic director Elizabeth Lawrence and fab producer Warner Boutin.
Check out Chris Sand's blog HERE.
This is his latest excerpt:
Friday, July 22, 2011
Greetings from Chicago! Roll Out, Cowboy begins its theatrical release tonight, and lot's of press is coming in.
Chicago Tribune just gave it 3/4 stars and a lovely review which I'll post a link to when I find it online.
NPR (WBEZ locally) did this super-pro job: http://www.wbez.org/episode-segments/2011-07-21/roll-out-cowboy-roams-and-raps-across-midwest-89464
Check out Roll Out Cowboy's home page for reviews, news and upcoming showings.
The Sandman gave us a copy of Rough Notes From Otter Cove, one of his CDs that has a few kids tunes on it as well as more mature material, which we'll be checkin' out and reviewing.

Also check out Facets Multimedia.   We've volunteered here monthly since 1990 and the kids can often be seen helping out with tickets and concessions.    Facets features a wide range of multicultural and indie films in the cinema and have one of the largest video rental libraries in the nation.    You can join for a minimal monthly fee (varies depending on the number of DVDs you want at a time).   The monthly video membership then gets you two free tickets to anything showing.
Posted by Bonnie Kenaz-Mara at 12:19 PM