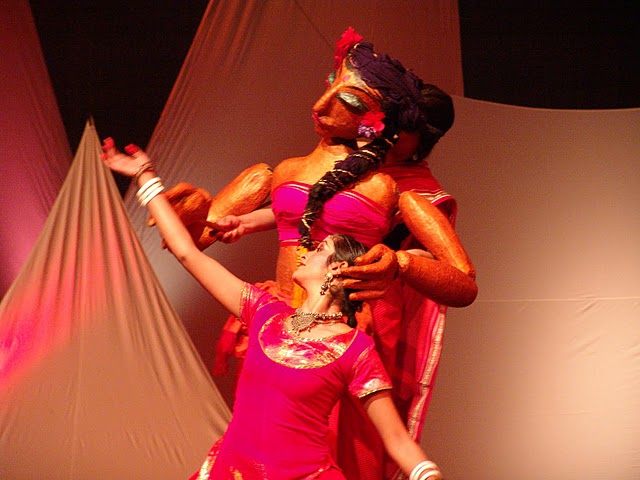 Millennium Park is an absolute gem in Chicago's crown, and we highly recommend checking in early and often with their fantastic programming.   Shows run throughout the year, but are particularly numerous and spectacular every summer.    They have a world class line up of music, theatre, family activities, and entertainment that crosses genres and continents.


Tonight we're very excited to be heading down to The Harris Theater for opening night of the first annual Eye on India Festival which runs July 8 – 17. 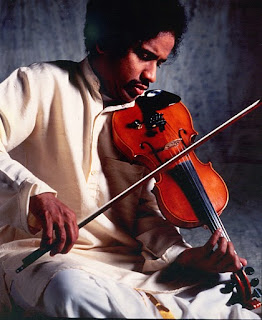 Pictured: Dr. L Subramaniam, world renowned violin maestro will perform at the Harris Theater Friday, July 8 as part of the Eye on India festival 2011.
Family Friendly Festival Highlights:
Tonight:  Internationally acclaimed Indian classical violinist Dr. L. Subramaniam with special local guests, the Chicago Children’s Choir and Natya Dance Theatre.   Friday, July 8 at 8 p.m. at the Harris Theater. Tickets are $35 - $70.
FREE family friendly yoga events:
These events are a great opportunity to expose children to a new culture while allowing moms to gather some much needed mental and spiritual tranquility for themselves.    My kids have taken yoga through the YMCA and an after school program, and they love it.   I've seen a huge difference in their ability to relax in stressful situations, their flexibility (physically and mentally) and their attention spans.
Mythology & cultural through puppetry, martial arts & dance: 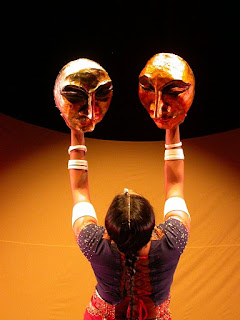 Pictured: "Transposition," presented by the Ishara Puppet Theatre Trust at the Harris Theater Friday, July 15 as part of the Eye on India festival 2011.   All Photos:   Eye on India Festival

Ishara Puppet Theatre Trust presents “Transposition,” an original work based on Rashna Imhasly's book, “The Psychology of Love: Wisdom of Indian Mythology.”  “Transposition” features dance, martial arts and puppetry to both playfully and powerfully depict the illusions of love and the duality of each person.   Tickets are $25 - $50 for this one-night only performance at the Harris Theater Friday, July 15 at 8 p.m.

A unique and colorful extravaganza of Indian culture, the first annual Eye on India festival honors the wealth of India’s cultural heritage by showcasing the best of Indian music, theatre, literature, film, traditional health and wellness and visual arts in Millennium Park and surrounding venues including the Harris Theater, the Art Institute of Chicago, the Chicago Cultural Center and Chicago Artists’ Coalition.  This extraordinary festival will join Chicago’s world class cultural landscape for ten days July 8 – 17, 2011.

Presented by Indian-based Teamwork Films in partnership with Chicago-based Anookul Inc., Eye on India will open Friday, July 8 at the Harris Theater with internationally acclaimed Indian classical violinist Dr. L. Subramaniam with special local guests, the Chicago Children’s Choir and Natya Dance Theatre. Daily events to follow, the majority of which are free of charge, will include: literary panels with esteemed journalists and authors including Tarun Tejpal and Hari Kunzru; an Indian film retrospective hosted by critically acclaimed Indian actress Tabu; a “Music Without Borders” concert featuring Susheela Raman; a performance by India’s Ishara Puppet Theatre Trust; and The Wellbeing Experience, which will include several yoga and wellness events.


Tickets for violinist Dr. L. Subramaniam and Ishara Puppet Theatre Trust’s performance of “Transposition” are on sale now and can be purchased through www.eyeonindia.com.
TICKETED EVENTS:
Known as the “God of Indian Violin,” Dr. L. Subramaniam is not only an acclaimed Indian classical violinist, but also an exceptional composer, performer and producer.  Subramaniam has collaborated with a wide range of musicians, including recordings with Yehudi Menuhin, Jean-Pierre Rampal, Herbie Hancock, Jean Luc Ponty, Corky Siegel and Ravi Coltrane.  He combines jazz, occidental, jugalbandis, world music and global fusion, to perform both Karnatic and western classical music, creating a blend that is universal in nature and approach. Dr. L. Subramaniam will kick off the Eye on India Festival Friday, July 8 at 8 p.m. with special guests, the Chicago Children’s Choir and Natya Dance Theatre at the Harris Theater. Tickets are $35 - $70.
One of India’s foremost puppet groups, Ishara Puppet Theatre Trust presents “Transposition,” an original work based on Rashna Imhasly's book, “The Psychology of Love: Wisdom of Indian Mythology.”  “Transposition” features dance, martial arts and puppetry to both playfully and powerfully depict the illusions of love and the duality of each person. With exquisite sets and a moving soundtrack, this internationally acclaimed show is a complete sensory experience. Tickets are $25 - $50 for this one-night only performance at the Harris Theater Friday, July 15 at 8 p.m.
FREE EVENTS:
Literature sessions will be held for a full day on Saturday, July 9 at the Art Institute of Chicago in Fullerton Hall.  Three separate one-hour sessions will commence at 11 a.m., 1 p.m. and 3 p.m., featuring moderated discussions with panelists including: Tarun Tejpal, author of “The Alchemy of Desire,” managing editor of Outlook and declared by BusinessWeek among 50 leaders at the forefront of change in Asia; writer and political commentator Nayantara Sahgal, whose award-winning work includes “Rich Like Us;” journalist and historian, Shrabani Basu, who currently writes for The Telegraph as well as other publications; and Hari Kunzru, a New York City resident whose work has appeared in The New Yorker, New York Times, Guardian, and Times of India among others. All three sessions are free with museum admission.
A film retrospective will feature one of the most critically acclaimed actresses in India, Tabu, who is best known in America for her leading role in Mira Nair's “The Namesake.” She has won the National Film Award for the Best Actress twice and holds the record for the most wins of Filmfare's Critics Award for Best Female Performer. Tabu will be speaking at the Art Institute of Chicago’s Fullerton Hall Sunday, July 10 at 3 p.m. (free with museum admission) and will host a free screening of one of her films Monday, July 11 at 6:30 p.m. at the Chicago Cultural Center.
British musician Susheela Raman exploded onto the music scene in 2001 with her debut album, “Salt Rain,” winning the UK’s coveted Mercury Prize. She keeps her Tamil heritage alive in her music, mixing South Indian classical music with jazz, folk and pop.  As a composer, arranger and interpreter, Raman has gained immense critical and popular acclaim for her records and performances.  Accompanied by tabla player, Aref Durvesh, guitarist and producer Sam Mills, and Rajasthani folk musicians, Kutle Khan, Chugge Khan, and Nathoo Lal Solanki, Raman’s multi-layered vocals lead an inclusive sound of traditional Rajasthani folk and rare South Indian Raga. She will perform at the Jay Pritzker Pavilion in Millennium Park as part of the “Music Without Borders” series presented by the Chicago Department of Cultural Affairs and Special Events, Thursday, July 14 at 6:30 p.m.


Millennium Park will host two free, family-friendly events of The Wellbeing Experience, including Indian music & yoga at the Family Fun Festival Tent on Chase Promenade, Friday, July 15 at 1 p.m. and a morning Yoga in the Park session on the Great Lawn Saturday, July 16 at 8 a.m.
About The Producers:
A highly versatile entertainment company, Teamwork Films currently produces 17 performing and visual arts festivals in 21 cities across 11 countries including festivals in Australia, Germany, Hong Kong, Italy, India, Israel, Singapore, South Africa, Spain, the United Kingdom and the US.  The highlight of their work is the immensely popular DSC Jaipur Literature Festival, an annual event that features more than two hundred authors and critics from across the world over a five day period.  Additional notable Teamwork events include Hay Festival in Kerala, the Bookaroo Festival for Children, the annual Mahindra Excellence in Theatre Awards (META) & Festival,  the Ishara International Puppet Festival in New Delhi and Shared History- The Indian Experience,an annual festival of the performing & visual arts in South Africa.www.teamworkfilms.com.
Anookul Inc is dedicated to the promotion of Indian and global cultures in the United States. Founded by Anu Behari, a long time resident of Chicago, Anookul is committed to promoting and creating cultural partnerships between India and Chicago.
The full festival schedule is as follows:
Programming is subject to change. For more information about the first annual Eye on India festival and programming updates, visit www.eyeonindia.com.


**Eye on India Festival producers have announced the cancellation of the highly anticipated “Where The Streets Have No Name” exhibition that was to be installed at the Chicago Artists’ Coalition July 8 – 13.

“Due to a severe delay with the cargo and clearing company in shipping these pieces from India to Chicago, we will unfortunately not be able to include this exhibition in the Eye on India Festival this year,” said festival producer Anuradha Behari. “We have been working very closely with several organizations to make this exhibition come to life in Chicago, especially the Chicago Artists Coalition, who have all been wonderful partners.  We are truly disappointed, and we hope that we can bring the exhibition to Chicago at some point in the future.”
Posted by Bonnie Kenaz-Mara at 5:11 PM