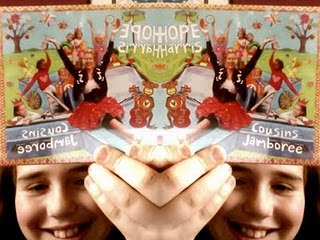 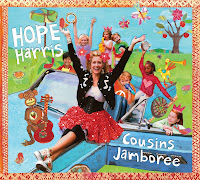 Big congrats to, Cordia C.,ChiIL Mama's Win A Disc Wednesday winner this week.   You'll get the brand new Hope Harris kindie release, Cousins Jamboree.
GRAB YOUR DANCIN’ SHOES & WARM UP YOUR SINGIN’ VOICE TO JOIN
HOPE HARRIS
in
COUSINS JAMBOREE
“Hope Harris combines country and swing with a little touch of show music … Harris has a clear and friendly voice that reminds one of Kate Taylor and Patsy Cline.”
– Lahri Bond, 2010 Parents' Choice® Silver Honor Award review of Cousins Jamboree
“Cousins Jamboree – with a whopping 16 songs – serves up all the energy of a live performance and then some.  With rich arrangements and whimsical lyrics, the charm of this folksy artist shines through on every track.”
– Richmond Family Magazine 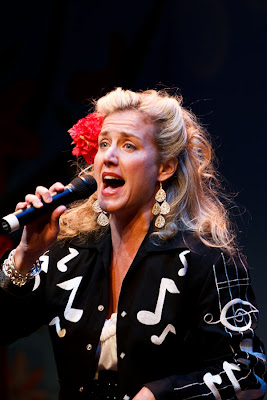 With a 2011 Parents’ Choice® Silver Honor Award for her new CD Cousins Jamboree proudly in hand, independent children’s musician Hope Harris is all set to share her music with the world!  Rocking songs, whimsical songs, heartfelt songs, and soon-to-be sing-along-songs combine on this 16-track album of Hope Harris originals and arrangements, each one set with imagination, style, and country warmth.
Beautifully produced by the man who co-produces the Dan Zanes family albums, Rob Friedman, Cousins Jamboree cannot help but engage listeners from the get-go, in large part due to the open friendliness and musical purity of Hope Harris’s inviting voice.  Hope relies on the quality of her singing to carry the song and compliments her young listeners by assuming they are intelligent enough to appreciate music that doesn’t rely upon gimmicks.  In creating Cousins Jamboree, Hope’s wish has been to create a down-home, good-times celebration showcasing country, swing, jazz, blues, ‘50s rock & roll, folk, and show-tune sounds — a montage of American music — while at the same time reminding children that being kind to one another, looking out for friends, and behaving with good manners is a happy way to live.
Wrote Lahri Bond in his Parents’ Choice® Silver Honor Award review of Cousins Jamboree, “Unlike her first album Julie the Starfish and Other Lullabies, which was more subdued, Cousins Jamboree takes a decidedly more energetic approach. Songs such as ‘Howdy Hello,’ ‘Hang on Friend,’ ‘I Love Apples,’ and the fun loving title track all exude country warmness and good time celebration. Though the majority of the album is danceable party music, when Harris turns her pen to such ‘lesson’ songs as ‘Good Manners,’ ‘Seatbelt Buckled,’ and ‘A Little Bit Afraid,’ she does so with style and avoids becoming obvious or preachy. Her cover songs like the lovely ‘Down in the Valley,’ or the Andrew Sisters-esque ‘Five Little Monkeys,’ sit well next to her finely crafted originals. The album closes with the picturesque ‘Holcomb Rock Road,’ which plays like a taste of cool country water.”
Hope Harris’ debut album, Julie the Starfish and Other Lullabies, was declared an “instant classic” by parents and was nicknamed “the magic CD” because of its ability to relax listeners of all ages with an ethereal blend of voice and guitar.  The arrival of Hope’s two sons fueled inspiration for new material, which turned out to be a handy way to keep the boys entertained!  In light of Hope’s ability to sing a song that tells a good story with her characteristic open friendliness and total lack of pretense, Cousins Jamboree promises to be another “instant classic.”
A graduate of the University of Virginia and, later, the Neighborhood Playhouse School of Theatre, Hope Harris spent many years living and performing in NYC, appearing both on and off Broadway, in regional and stock productions across the country, and even doing stints at venues like Nashville’s famed Bluebird Café.  A crowning success in the kids’ realm was her starring appearance, for three years running, as “Baker Bobbie” for the Park Slope, Brooklyn, Chocolate Chip Chamber Music Series, for which she is also a contributing scriptwriter.   Hope now lives with her family in Richmond, VA but returns often to NYC to perform.
Coming next from Hope Harris, in fall 2011, will be Picasso, That’s Who, an album honoring great artists through the centuries.  Looking ahead to spring 2012, Hope plans to release an Earth-friendly CD titled Lemonade Stand.
Cousins Jamboree, previously released locally in Richmond, Virginia, is available online at www.hopeharris.com , amazon.com , and cdbaby.com , as well as at Franklin Goose in Richmond, Virginia.
CD Details: Cousins Jamboree
For ages 3 - 10.
Label: Holcomb Rock Records
SRP: $15.00
Run time: 42 minutes.
Check out her site HERE for ordering info, more details, and fun projects like DIY magical maraca directions. 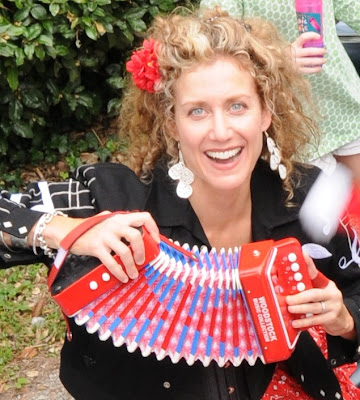 Be sure to enter HERE for your chance to win.   Next Wednesday we'll give away Luv Clowns. 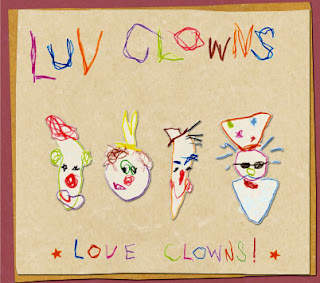 Check 'em out HERE.   You can't help but luv the Luv Clowns!
Posted by Bonnie Kenaz-Mara at 1:53 PM