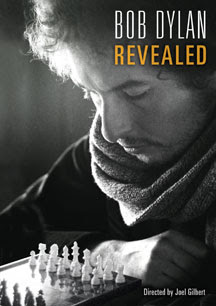 Believe it or not, Bob Dylan turned 70 yesterday.   To celebrate, we gave away a DVD, specially released to coincide with his birthday month.

Bob Dylan REVEALED, directed by Joel Gilbert.   This documentary will be released May 1, to coincide with Bob Dylan's 70th birthday month.
Highway 61 Entertainment and MVD Visual announce the release of Bob Dylan "Revealed" for worldwide DVD distribution (and VOD) on May 1, 2011 in conjunction with Bob Dylan's 70th birthday.
When Bob Dylan turns 70 in May, his iconic career will have spanned five decades. Yet, a true portrait of the reclusive "voice of the generation" has eluded Dylan fans. Through exclusive insider interviews, and never-before-seen photos and footage spanning Dylan's 50-year career, Bob Dylan Revealed offers an intimate biography of who Bob Dylan was, and who he is today.
Producer Jerry Wexler and award-winning songwriter Al Kasha provide an untold account of Dylan's early days at Columbia Records in 1962. Drummer Mickey Jones chronicles the 1966 Bob Dylan and the Band electric world tour that changed Rock n' Roll forever, while soon after, Dylan used the cover of a motorcycle accident to enter drug rehab. Dylan's 1974 comeback tour is illustrated by tour photographer Barry Feinstein through his finest photos and behind-the-scenes accounts.  In 1975, Bob Dylan hit the road with a rag-tag band of folk troubadours, culminating in "The Night of the Hurricane". Folk legend Ramblin' Jack Elliott, violinist Scarlet Rivera, bassist Rob Stoner, and Rubin "Hurricane" Carter reveal the inside story of Dylan's Desire album and Rolling Thunder Revue tour.
Following a stint as The Entertainer in 1978, Bob Dylan fell into the arms of the Lord through the Vineyard Christian Fellowship Church, producing three Gospel albums. Derided as "God-Awful Gospel," Dylan's radical new direction alienated fans and enraged critics. Pastor Bill Dwyer, journalist Joel Selvin, singer Regina McCrary, keyboardist Spooner Oldham, and Dylanologist AJ Weberman share intimate accounts of Bob Dylan's "born-again" transformation - and his return to Judaism!  Bob Dylan Revealed culminates with Dylan's Never Ending Tour that began in 1992 and continues to this day, as drummer Winston Watson recounts his personal journey as a warrior in Bob Dylan's "Never Ending Band".
Trailer: http://www.bobdylanrevealed.com
Buy It Here: http://www.seeofsound.com/p.php?s=MVD5136D
In fact, we picked winners May 1st for 3 "parents night in" DVDs, but we were so inordinately busy we picked em but didn't publicly post em!    Apologies for that.   April and May have been a bit crazy-busy around these here parts.

Click HERE for all the write ups, rave reviews, and ordering info on our 3 DVDs.   We'll also announce the winner of our signed copy of Peter Pan's NeverWorld book & t-shirt combo later today.
Congrats to our 3 DVD winners:

If you are waiting on prizes in the mail, we should have everything to date caught up and shipped out by the end of the first week of June.    We do try to send out everything in a timely manner, but sometimes life gets in the way.    Our general policy is to ship everything once a month.   So you can expect to see your winnings anywhere from a couple days to a month after you've won, so I can spend less time in line at the post office every few days and more time with my kids and covering great stuff for our readers.
Most CDs, DVDs, books, toys, etc. come from us, but some come from the band or publicist or publisher.   If it's been 4-6 weeks and you are still waiting on something, please drop me an e-mail at zbluesun@gmail.com and I will make every attempt to find a replacement.   We have had a few things lost by the stellar USPS over the years.    Otherwise, please be patient and we'll ship everything as soon as we can.
Posted by Bonnie Kenaz-Mara at 1:16 PM