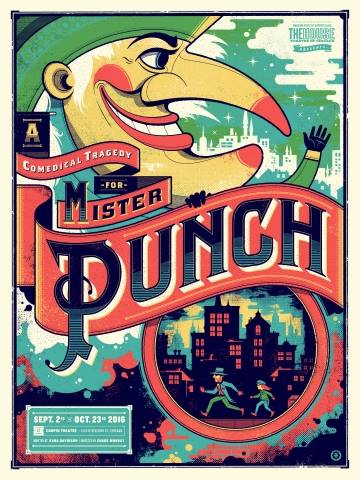 Oh joy! Whenever The House Theatre announces a new show or a favorite remount I get all excited like a little kid at Christmas. Their season opener is no exception. They had me at the title. I mean really, The House Theatre prowess AND puppetry are two of our favorite things. And, extra bonus, Adrian Danzig, Chicago dad and one of our favorites for physical comedy, stars as Pietro the puppet master in this world premiere. We've known him since his son was in preschool with my 13 year old daughter and we've adored his work in 500 Clown, Go Dog Go with Chicago Children's Theatre, and so much more. My whole family can't wait to catch this one! We'll be there to review A Comedical Tragedy for Mister Punch on opening night. In the meantime, here's the scoop:

The House Theatre of Chicago is proud to announce its 2016 – 2017 season opening production, the world premiere of Kara Davidson’s A Comedical Tragedy for Mister Punch. Influenced by the long history of puppets, Punch and Judy, and directed by Shade Murray, the production runs September 2 – October 23 at the Chopin Theatre’s Upstairs Theater, 1543 W. Division St. Previews are Friday, Sept. 2 – Friday, Sept. 9. Opening/press night is Sunday, Sept. 11 at 7 p.m.

The performance schedule is Thursdays - Saturdays at 8 p.m. and Sunday evenings at 7 p.m.  Preview tickets are $15 and regular run tickets range from $30-35. $15 same-day tickets for students and industry professionals are available for all dates, seats permitting. For more information and to purchase tickets, please visit www.thehousetheatre.com or call 773.769.3832. 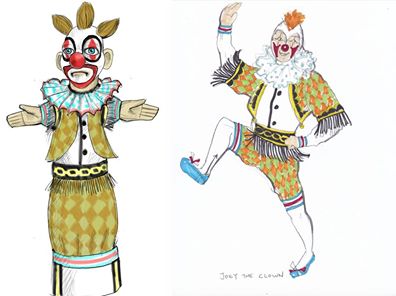 Charlotte, a young orphan, has made a home for herself thieving on the streets of London. She soon falls into employment as the assistant to an eccentric Italian puppeteer, Pietro. A master of the violent Punch and Judy puppet show, Pietro becomes a reluctant mentor to Charlotte. She is inspired and charmed by his bold, cheeky, and witty creations. The two become an efficient pair under Pietro's gruff and focused attention. As their partnership flourishes, Charlotte's vivid imagination calls the puppets to life to conjure her own versions of the classic tales. But Pietro may not let his protégé cut the strings easily. Reality blurs as live actors, hand puppets, shadow puppetry and marionettes share the stage to illustrate a dark reality of imperfect adults, corrupt authority, class discrepancy, and violence.

Davidson’s A Comedical Tragedy for Mister Punch takes audiences back to the arrival of the Punch and Judy show in 18th-century England, before it became a popular seaside and country fair entertainment staple. The production features puppet creations from Jesse Mooney-Bullock, designer of the puppets for The House’s The Hammer Trinity. Today, many Punch and Judy shows are censored, removing Punch's cruel and murderous nature, opting for themes that are more palatable for youthful ears. But Mister Punch can't escape his peppered past. Why do we cheer for this scoundrel? How does Mister Punch, a character who has been depicted as a merciless hero-villain for over two hundred years, get away with abuse and murder? Perhaps something meaningful lies underneath Mister Punch's colorful yet ruthless exterior. This production is recommended for ages 12 years old and older.

ABOUT KARA DAVIDSON, writer
Kara Davidson has been working with the House as an actor since 2013, but is excited to be stepping into the role of playwright this season! Two of her original full-length scripts were previously produced in the Twin Cities with Dovetail Theatre Company (of which she was a co-founder), and she is thrilled that Mister Punch will be making its world premiere on a Chicago stage. Previous (and current) productions with The House include Death and Harry Houdini (2013 and current), The Hammer Trinity, and Rose and the Rime. Around Chicago, Kara has also worked with Lookingglass, Chicago Shakespeare, and Manual Cinema, among others, and she regularly writes and performs for The Plagiarists "Salon" series. She holds degrees in Theatre Performance and French from the University of Nebraska.

ABOUT SHADE MURRAY, director
Shade Murray is an ensemble member of A Red Orchid Theater, where he has directed the world premieres of Brett Neveu’s Pilgrim’s Progress and Ike Holter’s Sender, as well as productions of Marisa Wegrzyn’s Mud Blue Sky and The Butcher of Baraboo, Annie Baker’s The Aliens, Nick Jones’ Trevor, Mike Leigh’s Abigail’s Party and Kimberly Akimbo by David Lindsay-Abaire.  He also performed in the A Red Orchid production of The Mutilated. Other directing credits include Steppenwolf Theatre Company, Steep Theater, Second City, Writers’ Theater, The Inconvenience, Strawdog, and elsewhere. Murray is a lecturer at University of Chicago and teaches at DePaul University and Actors’ Studio Chicago.

ABOUT PUNCH AND JUDY
The first record of the puppet, that eventually grew to be the infamous Punch, was made by Samuel Pepys in the late 17th century. He wrote his observations on the Italian puppet show playing in London’s Covent Garden in his journal. At the time Punch, short for Punchinello, was a puppet on strings but eventually, along with his wife Judy, evolved after nearly a hundred years to become glove puppets dressed in a jester-like fashion.
Puppeteers favored street performances at first, where the title of “Punch and Judy” was born, but eventually found their way to the seaside to perform to those on vacation. Today, various iterations of the show with roots in Commedia dell’ Arte, clown and slapstick comedy can still be found at the seaside, street festivals and carnivals around the world.

NOW PLAYING:
We're also coming into the final stretch of Death & Harry Houdini. This is one of our top favorites of all times and nothing short of astonishing. We've seen it a handful of times now and it's always a thrill. Don't miss this. Oh SO highly recommended. ChiIL Mama's Chi, IL Picks List.

ABOUT THE HOUSE THEATRE OF CHICAGO The House is Chicago's premier home for intimate, original works of epic story and stagecraft. Founded and led by Artistic Director Nathan Allen and driven by an interdisciplinary ensemble of Chicago’s next generation of great storytellers, The House aims to become a laboratory and platform for the evolution of the American theatre as an inclusive and popular art form.
The House was founded in 2001 by a group of friends to explore connections between Community and Storytelling through a unique theatrical experience. Since becoming eligible in 2004, The House has been nominated for 60 Joseph Jefferson Awards (21 wins), became the first recipient of Broadway in Chicago’s Emerging Theater Award in 2007, and was awarded a 2014 National Theatre Company Grant by the American Theatre Wing, founder of the Tony Awards. Now in its 14th year of original work, The House continues its mission to unite Chicago in the spirit of Community through amazing feats of Storytelling.
Posted by Bonnie Kenaz-Mara at 7:29 PM