ADULT NIGHT OUT: Pump Boys and Dinettes at Theatre at the Center September 15 through October 16

Theatre at the Center Announces Cast for Pump Boys and Dinettes 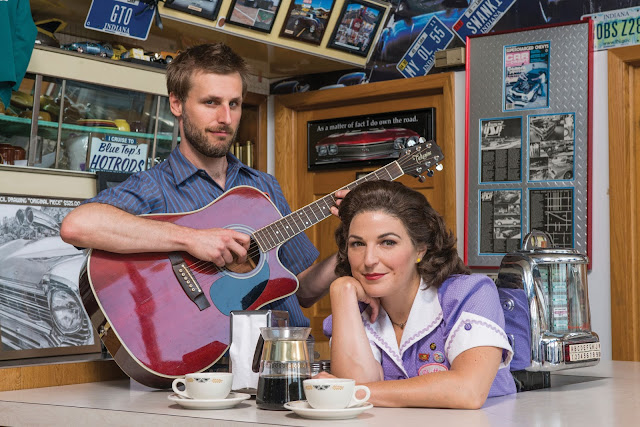 Five Chicago actor-musicians make their Theatre at the Center debut in the musical Pump Boys and Dinettes.  Christine Mild as Rhetta Cupp, Shaun Whitley as Jim, Matt Holzfeind as Jackson, Matt Edmonds as L.M. and Cody Siragusa as Eddie are joined by Veronica Garza, who returns to the TATC stage to play Rhetta’s sister Prudie Cupp.   The director is Brian Russell and William Underwood is Music Director.    Pump Boys and Dinettes opens at Theatre at the Center on September 15 and continues through October 16.   Press Opening is Sunday, September 18 at 7:00 p.m.

Set on Highway 57, somewhere between Frog Level and Smyrna, in the folksy, fun style of Grand Old Opry memories, this countrified musical is a tribute to life along the open road.   The story celebrates life’s simple pleasures and the value of friendship between four gas station attendants and two waitresses at the Double Cupp Diner.   Together, they perform a menu of country and western songs that have received rave reviews beginning with its Broadway debut in 1982 and continuing for many years in Chicago.

Performances are 2 p.m. Wednesdays and Thursdays; 7:30 p.m. Fridays, 3 and 7:30 p.m. Saturdays; 2:30 p.m. Sundays and select Thursday and Sunday evenings.   Individual ticket prices range from $40 - $44.   To purchase individual tickets, call the Box Office at 219-836-3255 or Tickets.com at 800-511-1552.   Group discounts are available for groups of 11 or more and gift certificates are also available. For more information on Theatre at the Center, visit www.TheatreAtTheCenter.com

Cast and Crew:
Director Brian Russell’s credits include Ring of Fire, a successful musical review that opened at TATC in 2014 and moved to Chicago’s Mercury Theater in 2015 where it enjoyed a six-month run. Ring of Fire recently completed performances with members of the original cast at the Wyoming Theater Festival.    William Underwood is TATC’s resident music director. John Foley, Mark Hardwick, Debra Monk, Cass Morgan, John Schimmel and Jim Wann wrote the Book, Lyrics and Music for Pump Boys and Dinettes and starred in the original 1982 hit musical on Broadway.

Posted by Bonnie Kenaz-Mara at 8:00 PM

Email ThisBlogThis!Share to TwitterShare to FacebookShare to Pinterest
Labels: adult night out, Munster IN, opening, Pump Boys and Dinettes, Shows on our radar, Theatre at the Center