ADULT NIGHT OUT: Babes With Blades Theatre Company’s The Promise of a Rose Garden at City Lit Theatre

Events and Deals Announced for
Babes With Blades Theatre Company’s
The Promise of a Rose Garden,
Opening August 6, 2016 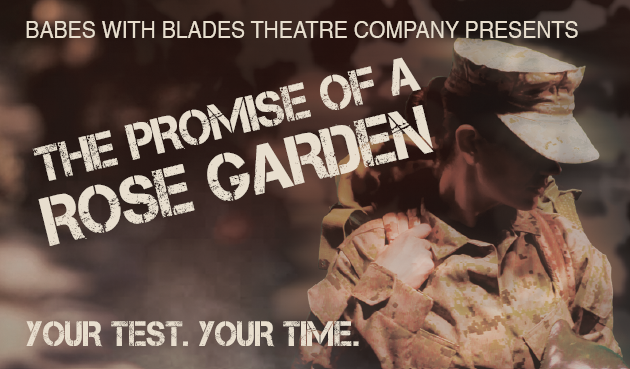 Post-show discussion, pay-what-you-can dates, and some big company announcements coming up during the run of the show.

Events and deals have been announced for Babes With Blades Theatre Company’s 19th world premiere production, The Promise of a Rose Garden, written by Dustin Spence, to be performed at City Lit Theatre, 1020 W. Bryn Mawr Ave., in Chicago. The show will run Thursdays-Saturdays at 8PM and Sundays at 3 from August 6 – September 10.

DEALS AND DISCOUNTS
All Performances August 7 – September 10 offer discounted admission to members of the Military with ID. $15 Tickets can be purchased online with code OORAH.

The Thursday performances of August 18, 25, and September 1 will offer pay-what-you-can admission.

Sunday, August 14 will be an Industry performance, offering $10 tickets to anyone with proof of industry affiliation.

Sunday, August 21: Stick around after the show for Servicewomen, Before and After: a post-show discussion about the lives of women who serve in the armed forces. Speakers will include Kimberly Green (Licensed Clinical Social Worker, Jessie Brown VA Medical Center) and Meosha Thomas (10 years active duty in the United States Navy; founder of One Savvy Veteran).

Before the Thursday, September 8 performance, join the company and sponsor David Woolley at 7pm at That Little Mexican Café for a party to celebrate 10 years of Joining Sword & Pen, BWBTC’s playwriting competition. Following the performance, playwright Dustin Spence will be presented with the Margaret M. Martin Award.

All closing weekend, September 8-10, BWBTC will be collecting monetary donations for One Savvy Veteran (http://www.onesavvyveteran.org/), a 501c3 non-profit organization founded by a woman veteran to meet the needs of fellow women warriors. They are a source of support, advocacy, benefit assistance and access to veteran-specific information and resources for women veterans in the Chicagoland area and surrounding suburbs.

Event information and updates can be found on BWBTC’s website here: http://babeswithblades.org/promise-promos-events/

Additional discounts and deals will be offered on BWBTC’s Facebook page: https://www.facebook.com/bwbtc


Babes With Blades Theatre Company uses stage combat to place women and their stories center stage. Through performance, script development, training, and outreach, our ensemble creates theatre that explores the wide range of the human experience, and cultivates broader perspectives in the arts community and in society as a whole.
Posted by Bonnie Kenaz-Mara at 10:07 AM