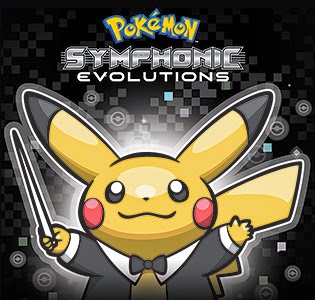 The Pokémon Company International and Princeton Entertainment announced today 30 new dates and locations for the official Pokémon live orchestral concert, Pokémon: Symphonic Evolutions. After sold out performances in Washington, D.C. and Pittsburgh, PA and selling 5,000 tickets in Philadelphia, fans across the country will soon get the opportunity to see and hear Pokémon: Symphonic Evolutions in a city near them. More information about the new dates, locations, and how to purchase tickets can be found at Pokemon.com/symphony.

Pokémon: Symphonic Evolutions is the must-see video game concert of the year, giving fans and newcomers of all ages the chance to experience the evolution of the Pokémon franchise like never before. Don't miss this amazing opportunity to meet up with friends of all ages to catch, battle and trade Pokémon from your favorite games. All-new orchestral arrangements and carefully timed visuals draw from recent and classic Pokémon video games, including:

The upcoming North America tour includes a first set of dates presented by Live Nation Entertainment in conjunction with Princeton Entertainment.  Performances will take place in some of the most prestigious venues in the country, including Wolf Trap National Park for the Performing Arts, the Theater at Madison Square Garden, The Chicago Theatre and The Greek Theatre, among others. A European tour is scheduled for spring 2016, with additional venue and location details coming soon.

“Pokémon: Symphonic Evolutions is a spectacular showcase of the memorable music that has been a hallmark of the Pokémon franchise for nearly 20 years,” said J.C. Smith, director of Consumer Marketing at The Pokémon Company International. “The concert series serves as a thank you to fans and an invitation to share our passion for Pokémon by reliving some of our fondest memories with the brand. We look forward to seeing fans of all ages enjoying this very special Pokémon orchestral event together.”

Posted by Bonnie Kenaz-Mara at 4:37 PM