Today is Free Ticket Tuesday at ChiIL Mama.   We have winners for:

1 pair of tickets to Chicago Bluegrass & Blues Fest--Lisa L.   Click the link above for our original photo filled coverage from 2011, band info, the 2012 line up, main site and more.
**Remember:  KIDS UNDER 12 ARE ADMITTED FREE TO THE CONGRESS THEATRE CHICAGO BLUEGRASS & BLUES FEST SHOWS WITH A PAYING ADULT!!

Doors: 11:00 am | Show: 11:00 am-3:00pm
Tickets: $8.00 | All Ages
ChiIL Mama will be upstairs with our free Rock N Roll Photo Booth,  Instrument Petting Zoo & brand new HOLOGRAPHIC ChiIL Mama buttons!
ChiIL Mama is stoked to sponsor Beat Kitchen's Concerts for kids-all ages-$6-every Sunday at noon/ *Winter Fest is 11am-3pm-$8  *We have 4 free tickets to EVERY show, so come ChiIL out with ChiIL Mama and enter like we vote in Chi, IL...early and often!)
Big congrats! 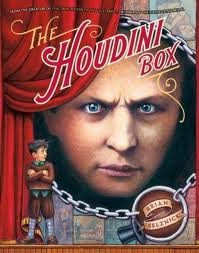 Free family 4 pack--enter here to win--2 days only!   Winner announced Friday at noon.
We also have two opportunities for you to win more tickets through Thursday at midnight:
Houdini Box at Chicago Children's Theatre 4 pack (recommended for ages 5 and up)
Tickets good for Saturday 1/28/12 at 11am.   Enter with the Rafflecopter form at the bottom of this post.
& a pair of (18+) tickets to see Clip Art at Schubas.   Our winners will be announced this Friday at noon.
The Houdini Box, is based on a book by the creator of The Invention of Hugo Cabret!    This production also features original music by Mark "Mucca Pazza" Messing.
The Houdini Box: Chicago
January 24-March 3, 2012
The Mercury Theatre 3745 N. Southport Avenue, Chicago
As famed escape artist Harry Houdini circles the globe performing one incredible stunt after another, Victor, a young devotee goes through his own rigorous magician’s training – locking himself in closets, holding his breath under water and walking into walls.  After a chance encounter with his hero, Victor receives a special box that just might contain the secrets of Houdini’s great success.
CHICAGO CHILDREN'S THEATRE HOLDING ITS BREATH, CAN'T WAIT FOR WORLD PREMIERE OF THE HOUDINI BOX, BASED ON THE BOOK BY BRIAN "HUGO" SELZNICK, JAN. 24-MAR. 4 AT THE MERCURY THEATERNOTHING CAN CONTAIN THE CREATIVITY OF DIRECTOR BLAIR THOMAS, BOOK/LYRICIST HANNAH KOHL, AND COMPOSER MARK "MUCCA PAZZA" MESSING AS THEY PREPARE TO UNCHAIN CCT'S NEWEST STAGE ADVENTURE THE HOUDINI BOX ALREADY SET TO ESCAPE TO THE NORTH SHORE CENTER FOR THE PERFORMING ARTS IN SKOKIE SOON AFTER ITS CHICAGO RUN, MAR. 14-25, 2012
If you're a fan of children's literature but not already familiar with children's author and illustrator Brian Selznick, all of that is about to change. Selznick's 2008 Caldecott Award-winning book, The Invention of Hugo Cabret, debuted last November as Academy Award-winning director Martin Scorsese's first 3D family film Hugo, and was just nominated for 11 Academy Awards including Best Picture.  Meanwhile, Selznick's newest children's graphic novel, Wonderstruck, was recently published by Scholastic Books to rave reviews.     And now, the Brian Selznick trifecta continues right here in Chicago when Chicago Children's Theatre unleashes The Houdini Box, a world premiere musical adventure based on Selznick's popular first novel about a mischievous boy who receives a special box that just might contain the secrets of Harry Houdini's success.    Master puppeteer Blair Thomas will direct and create sets and puppets for CCT's The Houdini Box, already a recipient of two prestigious development grants from the National Endowment for the Arts. Book and lyrics are by Hannah Kohl, with original music by Mark Messing, music director of Chicago's #1 circus punk marching band Mucca Pazza.   Performances of Chicago Children's Theatre's The Houdini Box are Jan. 24-Mar. 4, 2012 at the Mercury Theater, 3745 N. Southport Avenue, Chicago.   Note:  Subsequent Friday 7 pm performances on Feb. 3, Feb. 10 and Feb. 24 will be an expanded "An Evening of Magic," including the show followed by award-winning magician Brett Schneider performing amazing feats of magic and illusion.   Tickets to all performances are $15-$36.  For tickets and information, go to chicagochildrenstheatre.org or call the Mercury Theater box office, 773.325.1700.For more information about Chicago Children's Theatre visit chicagochildrenstheatre.org or call 773.227.0180.

1 (18+) pair of tickets to the final Monday of Clip Art's residency at Schubas.   Last night, we had a Lara Miller fashion press event, then we hit Empty Bottle to see Otter Petter, Mutts, Pinto & The Bean, & Wally Dogger.
However, our ticket winners told us Clip Art put on a phenomenal show.
She said, "Andy did a killer, acapella version of the Tom Waits song, "I'll Be Gone" from Frank's Wild Years. It was fantastic! The also covered The Kinks and The Shins. Tina Howe sat in on a couple of songs, as did Jessie from JC Brooks and The Uptown Sound and Cosmos."
**This is your last chance to win Clip Art Monday tickets, so click this link and enter here.**
1/30 -8:00PM w/ Baby Teeth + Jennifer Hall
Tickets In The Works:

We often add new shows as the months progress and have some great stuff in store for February.   So come ChiIL Out with ChiIL Mama, check back frequently, and enter like we vote in Chi, IL...early and often.


*further details about our winners appear in the original Rafflecopter widgets

*Wait for Rafflecopter to load up right here (if you've gone through RSS feed or are scrolling down the blog and don't see it, click on the actual page title and it should pop right up).   It's easy to enter and so much fun to win.

Posted by Bonnie Kenaz-Mara at 8:21 PM