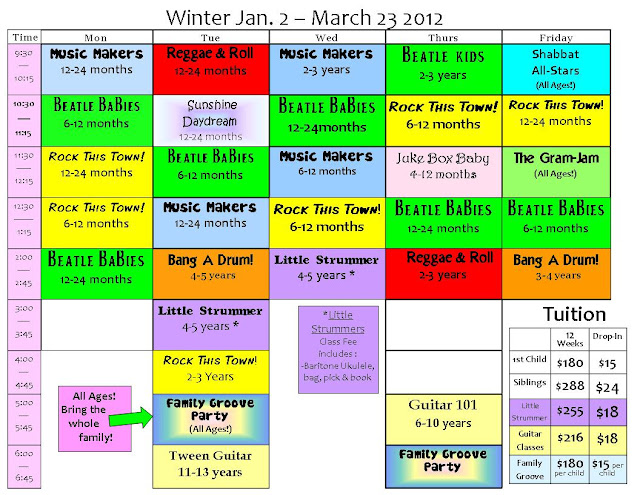 Following in the footsteps of School of Rock, Rock N Roll High School, Old Town School of Folk Music and other rock-ed cultural phenomenon, Chicago now has The Rock & Roll Arts Academy!
The Rock & Roll Arts Academy in Highland Park, founded by local "kindie" musician Mindy Hester, is open and ready to rock your littles!  Headed by the awesome Ms. Hester, the local “kindie” band Mindy Hester & The Time Outs take a NON-TRADITIONAL but FUN approach to entertaining and educating kids of all ages through rhythm and music.
Here at ChiIL Mama, we've given away tickets to a number of Mindy's concerts and reviewed & given away a bunch of her award winning CDs.  We even have a video interview with Mindy and her band that you can check out right here.   We know she rocks.
Mindy’s band has already won two Best Song Awards at the Kid’s Music Awards for their hit songs, “Welcome to the Jungle Gym” and “Monster in the Closet” off their latest album “Juice Box Hero”.     She also had a previous CD with the catchy title, Keep on Rockin' in the Preschool!
From January 19-21 they're hosting a Rock & Roll Open House at the Rock & Roll Arts Academy so that kids and their parents can learn origins of Beatles’ songs, dance to the psychedelic sounds of The Grateful Dead and say “Hey Now!” to the songs of Bob Marley! It's the opposite of "Baby Mozart" and our Open House event will showcase jam sessions, instruments and more. We're also looking for our next "Coolest Kid in Chicagoland!" and are hosting a video contest to find him/her!
Mindy’s background and experiences can offer NON-traditional tips on introducing music into the lives of your children and your readers’ children! Mindy started as an actress and musician and got her start at Chicago's famed Old Town School of Folk Music. She's taught for over 12 years and is just awesome!
www.mindysmusic.com
The Rock & Roll Arts Academy is poised to be the North Shore's hippest rock clubhouse for kids ages four months to 13 years!
Here's the open house scoop:
CALLING ALL COOL KIDS!!! THE ROCK & ROLL ARTS ACADEMY KICKS OFF 2012 WITH THE LAUNCH OF A “RAISING COOL KIDS CONTEST”
Families are invited to bring their little rock stars to shoot contest videos during
Open House Jam Sessions, Thursday January 19th through Saturday the 21st
HIGHLAND PARK, IL (JANUARY 19-21, 2012) –The New Year brings new goals, and why not make this years’ goal to “Raise Cool Kids”?  The Rock & Roll Arts Academy, the North Shore’s newest and hippest rock clubhouse for children, four months to 13 years, is launching its year long “Raising Cool Kids Contest” during its Open House Jam Sessions January 19th through 21st.
Families are invited to bring their little ‘rock star’ (or stars) to the Rock & Roll Arts Academy, located in the lower level of the Highland Park Community House at 1991 Sheridan Road, to make music videos on-site (for free) to see if they can take home the title of Coolest Kids on the North Shore.  The videos will be uploaded (via YouTube) to the Rock & Roll Arts Academy Facebook Page, where the video with the most ‘LIKES’ by January 27th at 5pm, will win a free ‘Birthday Party that Rocks!’ complete with private live concert ($400 value), and the title of January’s “Coolest Kid in Chicagoland!” Videos will be shot on a first come first serve basis.

**Open House hours are on Thursday and Friday from 3-7pm and Saturday from 11am-4pm.**
The contest will run throughout the year with monthly music topic themes such as February - love songs, March – Irish Rock (think U2), April – rain songs, May – songs for mom, June – songs for dad, etc.  The contest will culminate with a Coolest Kids Rock-Off against the 12 monthly winners.
The Open House will offer families an opportunity to drop in for jam sessions that will showcase the range of music programs designed to introduce and educate children to the musical global arts community by celebrating rock & roll, reggae, blues and folk music. This FREE interactive three-day event will encourage children and their parents to rock their hearts out, with breakout sessions highlighting individual genres and styles.  There will also be a hands-on instrument petting zoo, signing sessions, raffle prizes, dance contests, and food and refreshments and more.
Headed up by the award-winning kid’s musician Mindy Hester, mom, actress and lead singer of “Mindy Hester and the Time Outs,” the Rock & Roll Arts Academy is a one-of-a-kind center for early childhood music education and parents alike. Recognizing the importance of NON-traditional music education, Hester brings to life the songs older generations grew up with, while putting new spins on them for their young. Not the ordinary Baby Mozart based classes, parents and their kids learn the origins of Beatles’ songs, dance to the psychedelic sounds of The Grateful Dead and say “Hey Now!” to the songs of Bob Marley!
“Sharing music enhances relationships and creates a bond between parent and child,” says Hester. “Not to mention, hasn’t everyone at one point in their life wished they were a rock star? Our classes and jam sessions provide a creative outlet for parents and their kids to learn, grow and jam.” Class ages range from 4 months to 13 years.
In addition to the Rock & Roll Arts Academy Open House festivities, Hester is joining forces with the Shops on Sheridan to create a “Rock & Stroll on Sheridan Road” event for the entire community. Everyone is encouraged to shop and stroll store specials along Sheridan Road, between Central and Park Avenues, and check out 15 new ice sculptures on display.
The Rock & Roll Arts Academy is sponsoring a “Name That Tune” Ice Sculpture Competition where participants can win one of 15 prize packages from local merchants, as well as a chance at the grand prize of a Squire SA-100 full size acoustic guitar with case, picks, strings and instruction booklet, for naming the rock and roll song, lyric or music genre (Roaring 20's, Fabulous 50's, Swinging 60’s, Psychedelic 70's, Hair Banging 80's) the sculptures inspire or remind them of.  Contest forms are available at all participating businesses along Sheridan Road, and at the Rock & Roll Arts Academy.  The contest will kick-off January 19th at 3pm and run through January 21st at 4pm. Contestants are encouraged to bring their completed forms to the Rock & Roll Arts Academy, where they will receive a gift certificate for a free drop-in class, or can be turned in to any of the Shops on Sheridan by the 4pm deadline.  Winners will be announced on the Rock & Roll Arts Academy Facebook Page, and website, as well as participating Shops on Sheridan.
ABOUT THE ROCK & ROLL ARTS ACADEMY
The Rock & Roll Arts Academy is a fun early childhood music program. Classes are designed for children aged as young as 4 months old to 5 years old, but adult counterparts will love learning about diverse music and its culture. Owner Mindy Hester encourages a fun and laid-back learning experience. She is an award-winning kid’s rock performer and educator, and has taught and performed for over 12 years, starting her career at the prestigious Old Town School of Folk Music.  Hester is the lead in “kindie” rock band Mindy Hester & The Time Outs, who have won two Best Song Awards at the Kid’s Music Awards for their hit songs, “Welcome to the Jungle Gym: and “Monster in the Closet” off their latest album “Juice Box Hero”!
The Rock & Roll Arts Academy is located in Highland Park, Illinois at 1991 Sheridan Road, at the Highland Park Community House.  According to Hester “it’s never to soon to introduce music into children’s lives.”
For more information, such as tuition rates, please visit Rock & Roll Arts Academy at http://rockandrollarts.com/ or www.mindysmusic.com. You can also call 847-748-8993, or email info@rockandrollsarts.com.
Posted by Bonnie Kenaz-Mara at 10:21 AM