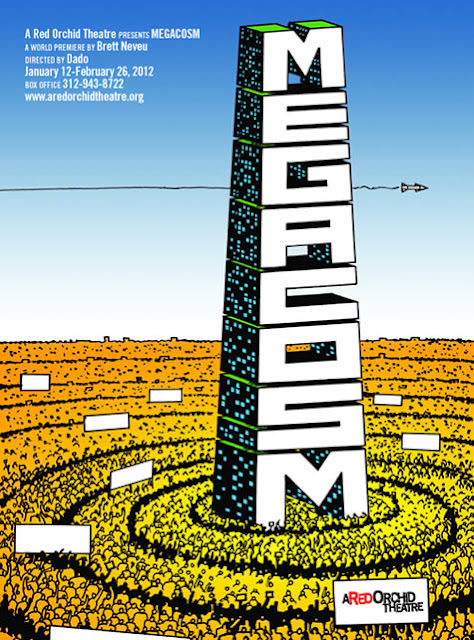 Brett Neveu is back in town with the world premier of Megacosm at Red Orchid!
Chi-Town is Theatre Town.   And winter is prime season to get in out of the cold and catch a great show.   Last year, Brett had 3 plays running simultaneously in Chicago, and we also caught up with his punk band, The Noses, when they played at Beat Kitchen.   Here's our video interview with him, part of our ongoing series on "How Creatives Parent and How Parents Create".
We're All Punk Parents:   Interview With Playwright Brett Neveu and Band Members of The Noses and This Magazine Is Haunted from ChiIL Mama on Vimeo.

With existential terror, Megacosm presents us with a world full of revolt and chaos both inside and out. An industrialist in the near future utilizes every means possible to get an inventor to sign over his revolutionary creation that will inevitably change the world. Corporate greed never met creative angst with such dramatic and hilarious results.

“Like being re-plugged into a theatrical-type power grid, I'm severely excited to be back home and working on my sixth world premiere with A Red Orchid Theatre,” Says Ensemble Member and Playwright Brett Neveu. “With Megacosm, a comedy about chaos, humanity and new product development, I hope to capture the spirit of why I am so proud to be a part of this ensemble. Action-packed and thought provoking, Megacosm was written for A Red Orchid -- folks that I love and trust with every fiber of my being.”

Artistic Director Kirsten Fitzgerald adds, “As the world continues to present us with fear, chaos and existential terror, I feel it is more important than ever to gather, to consider, and to laugh. We are honored to develop and premiere another of Brett's plays. Megacosm will make you laugh out loud - both in horror and with joy.”

About The Artists:
Brett Neveu (Playwright) is an Ensemble Member of AROT and returns after premiering five plays here in past seasons: Murders, The Earl, The Meek, and Eric LaRue and Weapons of Mass Impact. Recent past work includes productions with Writers’ Theatre, The Royal Court Theatre, Goodman Theatre, The Royal Shakespeare Company, TimeLine Theatre Company and American Theatre Company. He is the recipient of the Ofner Prize for New Work, the Emerging Artist Award from The League of Chicago Theatres, an After Dark Award for Outstanding Musical (Old Town with Strawdog Theatre Company), and has developed plays with companies including The New Group, Goodman Theatre, Steppenwolf Theatre Company, Victory Gardens Theater and is a resident-alum with Chicago Dramatists. He is also an ensemble member of A Red Orchid Theatre, a member of The Playwrights’ Union and a member of the Center Theatre Group’s Playwrights’ Workshop. Neveu has been commissioned by The Royal Court Theatre, Manhattan Theatre Club, Steppenwolf Theatre Company, Goodman Theatre, TimeLine Theatre Company, Writers’ Theatre, Strawdog Theatre and has several of his plays published through Broadway Play Publishing and Dramatic Publishing. He has taught writing at Northwestern University, DePaul University, Second City Training Center and currently lives in Los Angeles.

Dado (Director) is an Ensemble Member at A Red Orchid where her directing credits include The Unseen, The Hothouse, The Fastest Clock in the Universe, The Sea Horse and The Grey Zone. She was recently seen actually on stage at Trap Door Theatre. Dado received an After Dark Award for Outstanding Direction for the critically acclaimed U.S. premiere of Huddersfield by Ugliesa Sajtinac, which was produced by TUTA at Victory Gardens. She is the recipient of The Goodman Theatre's Michael Maggio Directing Fellowship, where she assistant directed A Life In The Theater with Robert Falls. Her work has been seen at Shattered Globe, Emerald City, Steppenwolf, Prop, Famous Door, as well as many others in Chicago and Los Angeles. 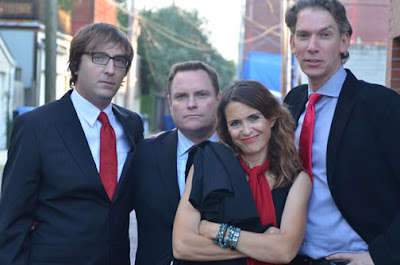 We just caught opening nights of Broadway in Chicago's In The Heights and Come Fly Away and Vitalist Theatre's The Ghost is Here earlier this week.
The Broadway shows are both short run, so don't delay or you'll miss out.   Despite a non-equity cast and a short run, In The Heights has fantastic source material and is family friendly.
We loved the sense of place and the way the neighborhood seeped into everyone's lives.  The Heights, as a neighborhood, influenced everyone, whether they loved it or were desperate to ditch it.  We enjoyed the tales of the girl who made it out (to Stanford on scholarship no less) then missed her community, and the stories of all the first generation immigrants who gave up everything to get there.   The choreography was particularly great.
Check out our prior coverage and show specifics here for In the Heights & Come Fly Away.
Check out our prior coverage of The Ghost is Here at this link.   We will have a full review up shortly.
Extended:
Opus at Redtwist Theatre is extended through Jan 29th-Check out ChiIL Mama's review here.
Posted by Bonnie Kenaz-Mara at 11:34 AM