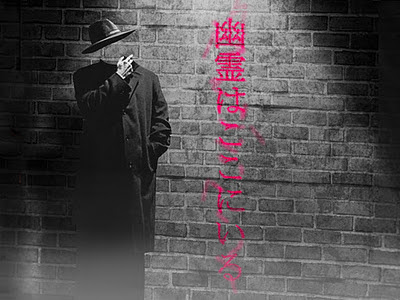 Presented by Vitalist Theatre in association with DCA Theater

Written in 1957 by Kōbō Abe, “The greatest avant-garde Japanese writer” (The Independent, London), The Ghost is Here is the story of an alarming and preposterous con-artist promoting a grim scam: selling the dead. Constructed in the manner of a Japanese graphic novel, the play has moments of stylized song and dance, gallows humor and surprising poignancy woven around stark themes that resonate in America today. Vitalist Associate Artistic Director Jaclynn Jutting directs.


We'll be checking out opening night tonight and we'll have a full review up shortly.  We've been familiar with Vitalist Theatre's work since the mid 90's.  A long time friend of ours did the set design for this production, so we're particularly interested to see the show.   Not to mention, the plot sounds intriguing!   Here's the scoop:

“Bring out your dead!” In a vision reminiscent of Monty Python, Samuel Beckett, Franz Kafka and Joseph Heller, Vitalist Theatre, in association with DCA Theater, presents the U.S.A. premiere of The Ghost is Here, the story of an alarming and preposterous con- artist promoting a grim scam: selling the dead. Written in 1957 by one of Japan’s most revered modern dramatists, Nobel Prize nominee Kōbō Abe, The Ghost is Here runs at the DCA Storefront Theater, 66 E. Randolph St., in the heart of Chicago’s downtown theater district, from January 12 through February 19, 2012.

With flair and panache, con-artist Oba – played by returning Vitalist actor Jamie Vann – develops an increasingly absurd scheme whereby war-weary and financially stressed villagers sell him pictures of their dead, only to be charged exorbitant prices when they seek to retrieve them. The wrinkle in the racket is the “agent” who represents the ghosts. Eventually, the prospect of sellers’ remorse prompts a stampede on the market, thereby seeming to assure Oba’s fortune in the best wheeler-dealer, robber-baron tradition.

The Ghost is Here is set in the ruins of occupied, post-WWII Japan when the war-ravaged empire was forced to grope its way toward national redefinition. Suffering a loss of tradition, a devastated economy and a realignment of global power brokers, the villagers teeter on the edge of a plunge into unregulated and rapacious capitalism.

Constructed in the manner of a Japanese graphic novel, the play has moments of stylized song and dance, gallows humor and surprising poignancy woven around stark themes that resonate in America today. With echoes of Brecht, The Ghost is Here is deadly serious while witnessing the ludicrous flim-flam man and the innocents caught in his web.

Kōbō Abe (1924-1993) was a critically acclaimed Japanese writer, playwright, photographer and inventor. Nominated multiple times for the Nobel Prize in Literature, Abe’s novels and plays are characterized by calm observations and avant-garde techniques. Central themes in Abe's work are loss of identity, alienation, isolation of the individual in a bizarre world, and the difficulty people have in communicating with one another.

In the West, Abe is best known for his novels, such as The Woman in the Dunes (1962), one of the premier Japanese novels of the 20th century that garnered Abe the Yomiuri Prize in 1962, and The Face of Another (1964). In the 1960s, Abe adapted several of his novels to film including Woman in the Dunes (Oscar nomination for Best Foreign Language Film), The Face of Another, The Pitfall and The Ruined Map. He was elected a Foreign Honorary Member of the American Academy of Arts and Sciences in 1977.

Donald Keene is an award-winning scholar, teacher, writer, translator and interpreter of Japanese literature and culture. Keene was University Professor Emeritus and Shincho Professor Emeritus of Japanese Literature at Columbia University, where he taught for more than 50 years. He has published 25 books in English on Japanese topics, and more than 30 books in Japanese. Keene has received numerous accolades including the Yomiuri Prize in 1985 (Keene was the first non- Japanese to receive the honor). In 2008, Professor Keene received one of Japan’s highest honors, the Order of Culture (Bunka Kunsho), presented by the Japanese Government, and became the first foreign national to receive such an award.

Tickets are $25 for general admission; $20 for seniors; $15 for students with a valid ID. Tickets are $15 for preview on January 12. Military personnel tickets are $20 and ADA accessible tickets are available for $12.50.

All tickets are available by calling 312.742.TIXS (8497), visiting www.dcatheater.org, or stopping by the Chicago Cultural Center Ticket Office in the Chicago Cultural Center at 78 E. Washington St., open Tuesday through Saturday, noon to 6 p.m. and Sundays, noon to 4 p.m. When available, tickets go on sale one hour before each performance at the DCA Storefront Theater.  Additional discounts are available for theater industry affiliates and large groups.

*Discounted parking is once again available at Wabash Randolph Self Park (Interpark) at 20 E. Randolph. Patrons can receive the $12 rate by validating their ticket at the Storefront Theater ticket office.

Each season, DCA Theater accepts proposals from the city’s emerging and developing theater companies who wish to bring their innovative productions downtown. Presenting companies receive free performance space and resources, while theater-goers get an exciting glimpse into Chicago’s world-renowned theater scene. For more information and to apply to either space, visit http://www.dcatheater.org/yourshow/.
Chicago Department of Cultural Affairs and Special Events
The Chicago Department of Cultural Affairs and Special Events (DCASE) is dedicated to promoting an ongoing celebration of the arts; supporting the people who create and sustain them; and marketing the city’s abundant cultural resources to a worldwide audience. DCASE, in partnership with the Chicago Office of Tourism and Culture, programs and promotes thousands of high-quality free festivals, exhibitions, performances and holiday celebrations presented each year at Millennium Park, Grant Park, the Chicago Cultural Center and other venues throughout the city.

Chicago Office of Tourism and Culture
The Chicago Office of Tourism and Culture (COTC) is dedicated to promoting Chicago as a premier cultural destination to domestic and international leisure travelers, providing innovative visitor programs and services, and presenting free world-class public programs. COTC supports local artists through grants and other resources and creates vital opportunities for artists of all levels. For more information please visit www.ExploreChicago.org.