Act Out-Broadway in Chicago: In The Heights & Come Fly With Me Open Tonight 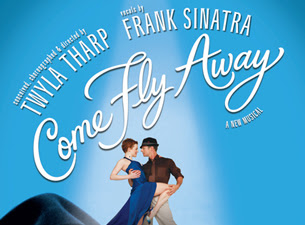 Broadway in Chicago continues to wow Chi-Town with world class, award winning productions.   Tonight I'll be reviewing In The Heights and tomorrow, Come Fly With Me.   Click the links for music videos, ticket purchasing info and more detailed show specifics.
In The Heights
Oriental Theatre 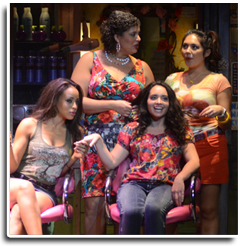 In the Heights production photo
4 Tonys and a Grammy!!
Tony says......They're grrreat.

In the Heights began as an original musical conceived by Lin-Manuel Miranda during his sophomore year at Wesleyan University. Upon graduating and returning home to New York, Miranda collaborated with director Thomas Kail to rework and restage the campus hit for a larger audience. That's how they captured the interest of producers Jill Furman, Kevin McCollum and Jeffrey Seller, whose previous work on Broadway included Rent, Avenue Q and The Drowsy Chaperone. After more workshops, more collaborators, and a stint at the Eugene O'Neill Theatre in Connecticut, the musical found a home at Off-Broadway's 37 Arts Theatre. Seven years after the idea was first born, In the Heights was ready for its New York theatrical debut.
During its Off-Broadway run at 37 Arts, In the Heights quickly became an audience phenomenon and a critical success. The response was unprecedented: the musical was luring both traditional and non-traditional theatergoers and garnering a huge cache of accolades, including the Outer Critics' Circle Award and Lucille Lortel Award for Best Musical. After over 200 performances, In the Heights played its final Off-Broadway show on July 15th, 2007, and began preparations for a move to Broadway, which included enhancements to the script and score, as well as new additions to the cast and crew.
In The Heights opened on Broadway March 9, 2008 at the Richard Rogers Theater to rave reviews. After 1,185 performances, the show closed on January 9, 2011. While on Broadway, the show received many accolades, including 13 Tony® Award nominations. In May 2009, PBS’s Great Performances debuted "In the Heights: Chasing Broadway Dreams" – a documentary that followed Lin-Manuel Miranda and the cast of In the Heights on their journey from the first rehearsal to the Tony ® Awards.
On October 27, 2009 the First National Tour of In the Heights launched in Tampa, FL.
After more than 500 performances, the tour closed on April 3, 2011 in Miami, FL. Highlights from the tour included engagements in Tokyo, Japan and San Juan, Puerto Rico. On October 18, 2011 In The Heights keeps the tradition alive embarking on a 10 month, 72 city North American tour.
We'll have a full review of both shows up shortly.   In The Heights is just breezing through town from January 10th-15th, at The Oriental Theatre, so get your tickets today! 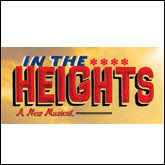 Come Fly Away
Bank of America
1/10-1/22
COME FLY AWAY is the new Broadway musical that brings together the legendary music of FRANK SINATRA and the creative vision of Tony Award-winner TWYLA THARP (Movin’ Out).This one-of-a-kind experience combines the seductive vocals of “Ol’ Blue Eyes” with the sizzling sound of a live on-stage big band and the visceral thrill of Tharp’s choreography. As 15 of the world’s best dancers tell the story of four couples falling in and out of love, you will experience the exhilaration of a first kiss, the excitement of a first dance, and the bittersweet moments of a first good-bye in a world of sparkling romance and astonishing beauty.
COME FLY AWAY features a score of beloved Sinatra classics including “Fly Me to the Moon,” “My Way,” “New York, New York” and “Witchcraft.”

Come Fly Away has to fly after the 22nd, so don't delay, find your seats today.
Posted by Bonnie Kenaz-Mara at 6:18 PM

Email ThisBlogThis!Share to TwitterShare to FacebookShare to Pinterest
Labels: act out, Broadway in Chicago, Come Fly With Me, In The Heights