Opening:   Here at ChiIL Mama/ChiIL Live Shows, we can't wait for Houdini and Houdini Box!   Houdini Box is family friendly fun at Chicago Children's Theatre and Houdini is playing simultaneously at The House for the PG13 crowd (*As always, use your best judgement.   You know your own kids better than suggested age guides.)  We'll be at opening night of both, very different shows next week.   There are so many fantastic offerings this year.   We'll continue to run ACT OUT theatre features often, with more family friendly and adult shows.   Here's a hand full of stand outs.  *FF signifies family friendly. 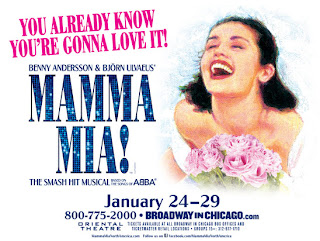 MAMMA MIA! is the ultimate feel-good show that has audiences coming back again and again to relive the thrill. Now the Broadway sensation is coming to Chicago’s Oriental Theatre and it’s your turn to have the time of your life at this smash-hit musical that combines ABBA’s greatest hits, including “Dancing Queen,” “S.O.S.,” “Super Trouper,” “Take A Chance on Me” and “The Winner Takes It All,” with an enchanting tale of love, laughter and friendship. Whether it’s your first visit or your fourteenth, see the show that has the whole world coming back for more, because every time feels like the first time at MAMMA MIA!. 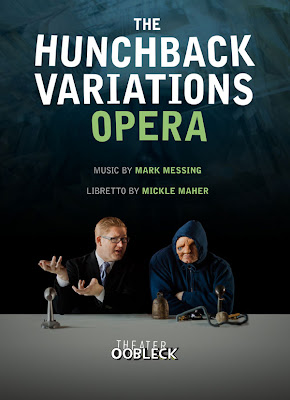 Mickle Maher‘s The Hunchback Variations (2001) has been one of the most successful productions in Oobleck’s 23-year history—presented to critical acclaim over the last decade in Chicago, St. Louis, Washington D.C., and Hamburg, Germany.

The Hunchback Variations takes the form of a panel discussion between Quasimodo, hunchback of Notre Dame, and Ludwig van Beethoven, composer, on their attempt to create a mysterious sound effect called for in Anton Chekhov’s The Cherry Orchard. Playing out over 11 scenes, or “variations,” the story details the duo’s collaboration—one doomed by their mutual deafness, their unpleasant working conditions, and the fact that Beethoven has not yet finished reading the The Cherry Orchard.

A deft deconstruction of the creative process, and a fearless investigation of artistic collaboration, Hunchback is driven by questions about the nature of music and sound and performance. So, what could be more natural than to throw it fully – collaboratively!—into the embrace of music and sound and performance by giving it over to the wildly innovative mind of composer Mark Messing, the genius behind the scores of numerous Redmoon productions, and co-founder of the mad, brilliant marching band, Mucca Pazza?

With George Andrew Wolff (tenor) as Beethoven, Larry Adams (bass) as Quasimodo, Tim Lenihan on piano, and Paul Ghica on cello.
Lighting design by Chris Wooten. Stage Management by Melinda Evans. !nea-logo-color.jpg 300w! This project is supported in part by an award from the National Endowment for the Arts


Directed by Blair Thomas. Book and Lyrics by Hannah Kohl, Music by Mark Messing. Based on the book THE HOUDINI BOX written and illustrated by Brian Selznick, and published by Atheneum Books for Young Readers

Brought to life right before your eyes by actors, musicians, and puppets, sure to thrill and surprise. As famed escape artist Harry Houdini circles the globe performing one incredible stunt after another, Victor, a young devotee goes through his own rigorous magician’s training – locking himself in closets, holding his breath under water and walking into walls.  After a chance encounter with his hero, Victor receives a special box that just might contain the secrets of Houdini’s great success.

“The Houdini Box,” Chicago Children’s Theatre. Brian Selznick wrote the children’s book “The Invention of Hugo Cabret,” the source for “Hugo,” one of the more prominent holiday movies this year. That has propelled Selznick and his work to a new level of awareness. “The Houdini Box,” which will be directed at Chicago Children’s Theatre by the formidable visual storyteller Blair Thomas, is a brand-new musical based on Selznick’s first book, the story of a boy who receives a mysterious box that may unlock the secrets of Harry Houdini.


Download “The Houdini Box” Study Guide and get info about the
Entrants to The Houdini Box Who's Your Hero? illustrated essay contest must be 15 years or younger as of Feb. 17, 2012. 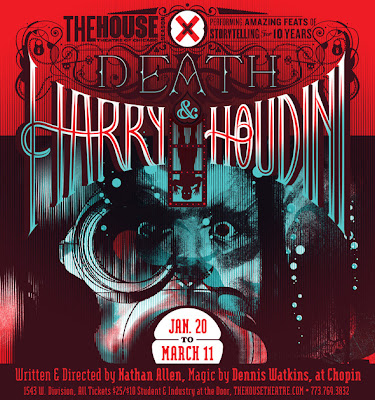 Come one, come all to see the Great Harry Houdini escape the clutches of Death!
Before your very eyes, The House's very own Dennis Watkins takes your breath away, chained and submerged in Houdini's dreaded Water Torture Cell.
Death-defying performances begin this weekend... with FREE PIZZA!
Tickets are just $25 to witness this unforgettable performance through March 11.

Cirque Du Soleil will be coming to a suburban Whole Foods Market Near You!     A Cirque Du Soleil bus will be coming to Whole Foods Market Chicagoland locations to bring their show on the road.  Customers will be able to participate in many fun activities including:
•    Watch Quidam sizzle reels and behind the scenes videos
•    Souvenir photos with a Quidam theme using green screen technology
•    Opportunity to win Quidam show tickets and prizes
•    Receive Quidam branded popcorn bags and postcards 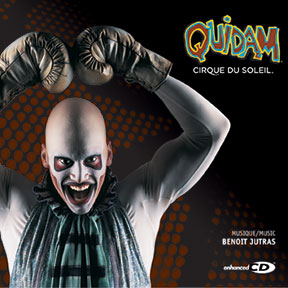 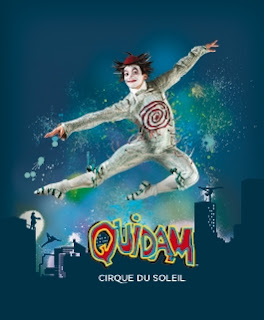 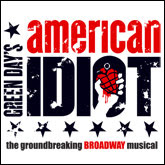 Direct from Broadway, the smash-hit musical AMERICAN IDIOT tells the story of three lifelong friends, forced to choose between their dreams and the safety of suburbia. Based on Green Day’s GRAMMY® Award-winning multiplatinum album and featuring the hits “Boulevard of Broken Dreams,” “21 Guns,” “Wake Me Up When September Ends,” “Holiday” and the blockbuster title track, AMERICAN IDIOT boldly takes the American musical where its never gone before. With direction by Michael Mayer (Spring Awakening), choreography by Steven Hoggett (Black Watch) and orchestrations and arrangements Tom Kitt (Next to Normal), the result is an experience Charles Isherwood of The New York Times declares “thrilling, emotionally charged, and as moving as any Broadway musical I’ve seen this year!” 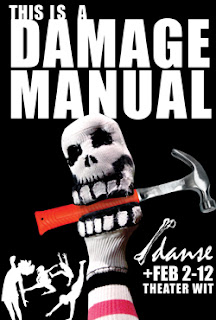 We're huge fans of Atalee Judy's work and we've already posted loads of YouTube video clips that became this show, but nothing compares to seeing it in person.   Come check them out! 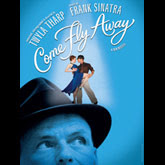 Come Fly Away
Broadway in Chicago
Bank of America Theatre

We had the great pleasure of seeing the show on opening night.   We were blown away by the choreography, and the excellent orchestra, prominently featured on stage instead of tucked away in the orchestra pit.   With booming, seductive vocals by Frank Sinatra himself, overlaid with the live, big band, I kept catching myself looking for the singer, even though I knew better!   Come Fly Away is flying from Chi-town the 22nd, so don't miss your chance.   The dancing was exquisite, moving and the perfect balance between classic and contemporary.    We particularly loved the "drunken dancers" reminiscent of drunken masteresque kung fu movie choreography.   That takes talent to pull off!  The emotions shone through, whether the dances were angry, playfully flirtatious, bumbling, sorrowful or sexy and provided a perfect compliment to Sinatra's classics.   If a picture's worth a thousand words, this wordless wonder just might provide a picture perfect evening of enjoyment.


COME FLY AWAY is the new Broadway musical that brings together the legendary music of FRANK SINATRA and the creative vision of Tony Award-winner TWYLA THARP (Movin’ Out).This one-of-a-kind experience combines the seductive vocals of “Ol’ Blue Eyes” with the sizzling sound of a live on-stage big band and the visceral thrill of Tharp’s choreography. As 15 of the world’s best dancers tell the story of four couples falling in and out of love, you will experience the exhilaration of a first kiss, the excitement of a first dance, and the bittersweet moments of a first good-bye in a world of sparkling romance and astonishing beauty.


On Our Radar :
(shows we haven't had a chance to see yet, but have heard great things about) 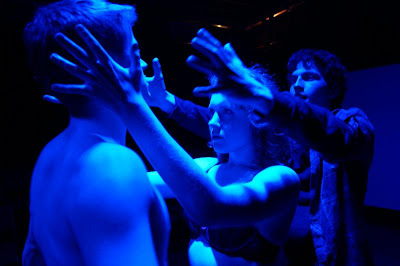 Dark Plays Or Stories for Boys

dark play or stories for boys by Carlos Murillo

Dark play or stories for boys follows a teenage boy’s foray into the virtual world. His fictional internet identity begins as a harmless game, but the game takes on a frightening reality when real emotion overtakes his online relationship. When Nick’s virtual world collides with the real world, his fantasies of love, intimacy, obsession and betrayal spiral into consequences that lead him to the brink of death. dark play or stories for boys was first produced as part the Humana Festival at Actor's Theatre of Louisville. Murrillo is the winner of National Latino Playwriting Award (2006) and the Otis Guernsey New Voices in American Playwriting Award at the 28th annual William Inge Theatre Festival. Murillo currently serves as the Head of Playwrighting Program at The Theatre School at DePaul University.

The American Premiere of Simon Stephens' powerful and critically acclaimed drama about a group of high school age students preparing for their final exams and nearing the end of their school lives. When the whole world opens up before you, there’s a danger it’ll swallow you up, there’s danger all around in this shattering new play that explores the volatility of adolescent life.  *Contains 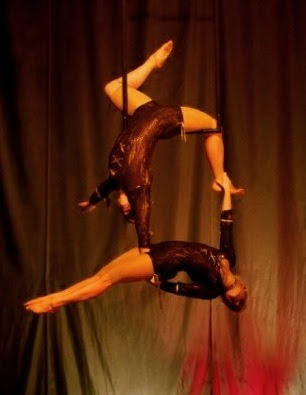 “The only thing cheap is the admission!”-Santa Fe Reporter

Like circus? Like awesome things that are crazy cheap? Then have we got just the thing for you. El Circo Cheapo Cabaret is an amazing circus show like nothing you have ever seen. An ever changing cast of some of the world’s most talented circus performers, as well as other performance artists, ensures no two shows are ever the same. 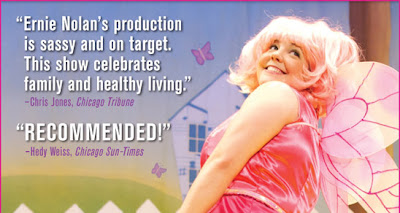 Pinkalicious
Broadway in Chicago
Broadway Playhouse
extended through May 27th! FF
Check out ChiIL Mama's Pinkalicious review here and our exclusive interview with Pinkalicious and her little brother right here!

*We also recommend checking out Chicago Kids
for a great guide to Family Friendly Theatre going on right now.
Posted by Bonnie Kenaz-Mara at 12:52 PM