REVIEW: Massenet’s Cendrillon at Lyric Opera of Chicago Through January 20, 2019 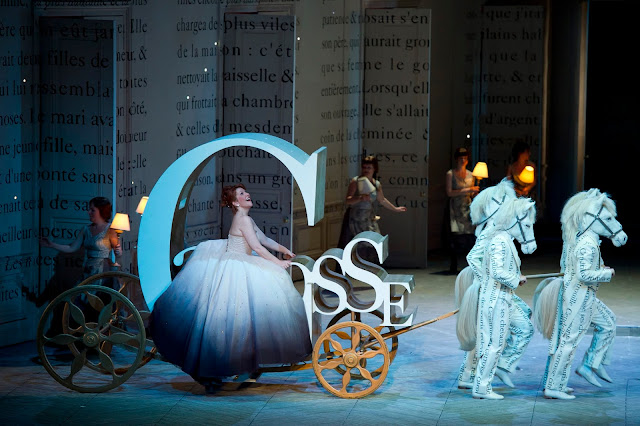 Guest Review
By Milan Pejnovich
Jules Massenet’s "Cendrillon" (Cinderella) returns to Chicago for the first time in over 100 years in a dazzling must-see production now playing at the Lyric Opera through January 20. A critical and popular success during the composer’s lifetime, the opera was the culmination of over 35 years of experience trotting out hits for the opera houses of Paris and the rest of Europe, so it has all of the trademarks of an audience-pleasing favorite – romance, heart, solos, duets, choruses, dance numbers, and (spoiler alert?) a happy ending. For some reason or other, however, the opera soon fell out of favor along with most of the rest of the composer’s oeuvre after his death, not returning to the standard repertoire until a Massenet resurgence in the 1970s. Thankfully for all us, it’s been back to stay ever since, because it truly is a textbook example of a lush French Romantic opera.

One should be familiar enough with the story, a creation of French writer Charles Perrault from the turn of the 17th century. Cinderella lives with her father, stepmother, and stepsisters but is made to do all the housework with none of the fun, including attending a lavish ball at the king’s castle designed to find the young Prince Charming a wife. Her Fairy Godmother intervenes, dressing up Cinderella in a beautiful gown and sending her off to the ball in an elegant carriage with the express command of needing to return home at the stroke of midnight. She and the prince fall in love, but in her rush to get home in time, she leaves with no contact information, but for her one forgotten glass slipper. In his search for her, the prince calls for all of the single ladies in the land to try on the slipper and reveal themselves, which Cinderella does and (spoiler alert?) all lived happily ever.

For the purpose of investing the plot with a little more drama and artistic merit, Massenet departed from the fairy tale in some significant ways. Cinderella’s father is a loving but henpecked man who understands that both his and his daughter’s lots in life would be better if they fled. Her stepmother and stepsisters aren’t so much sadistic or brutish as they are self-centered and vapid. And there’s a scene after the ball where Cinderella and Prince Charming both individually plead with the Fairy Godmother among the dark and mysterious rooftops of Paris to help them find one another. All of this helps create some alternately beautiful and amusing moments for the whole family to enjoy.

And speaking of families, all ages will be dazzled with this production by director Laurent Pelly, which has been seen all over the world, including Covent Garden and the Met, but is new to Lyric, as is the opera itself. The costumes are lavish, the set is both dynamic and ingenious, and the backdrop is designed with text from the original French tale written all over it in homage. Four of the five principal singers are all experienced in the roles but making their Lyric debuts, while most of the rest of the cast is comprised of current Ryan Opera Center members having their moments in the big house. It all truly is a feast for the eyes and ears, and is certainly one of the most charming and beautiful productions to grace Lyric’s stage in recent memory. It’s an unforgettable night at the opera.

We have a special treat and a first here at ChiIL Mama, dual reviews!

There's a chair with the letter "C" and as they're planning for the ball, Lucette (Siobhan Stagg) Cendrillon, peeks her head through a porthole and sheepishly appears after they left for the ball. Lamenting in a soulful aria, wishing, the fairy godmother (Marie-Eve Munger) magically appears and grants her a few hours that'll change the course of her axis. A carriage appears with the most regal of white horses galloping in synchronized choreography!

Prince Charming (Alice Coote)is struck, mesmerized by her elegant beauty, as she enters the ball, in her white, sparkling gown, stark contrast to everyone dressed in ovate shaped crimson red! They dance, stricken by cupids arrow, enchanted, till the stroke of midnight chimes.

Back home she worries for her lost glass slipper. The sycophants return, retelling a distorted perspective, that hurts Lucette, whose sympathetic, loving father offers they go away. She goes to the rooftops of Paris and in a dream, lives a loving moment with the prince! She falls ill at the news that the prince is searching for the "unknown beauty" and is elated when the shoe fits! This familiar storyline is magically reawakened in the melodic composition of Massenet and libretto by Henri Cain, conducted by Sir Andrew Davis!

I'm a visual person, so my favorite elements of this opera are many, including the fonts and set design, costumes, choreography, puppetry/horses, orchestration, singing, and the comedic humor!

Chicago is fortunate to have the world class Lyric Opera, a leader of firsts in
one of North America's most beautiful opera houses, the Civic Opera House — now known as the Lyric Opera House. The opera house was envisioned by billionaire utility magnate and president of the Chicago Civic Opera Association, Samuel Insull (1859-1938).

The building is shaped like a huge chair, and is sometimes referred by its shape as "Insulls chair"! From this vantage, we immensely enjoyed the Lyric's visually stunning production of "Massenet's  Cendrillon. Absolutely Exquisite! Timeless! Memorable on every level! I'd see it again and again!!...and Again!! 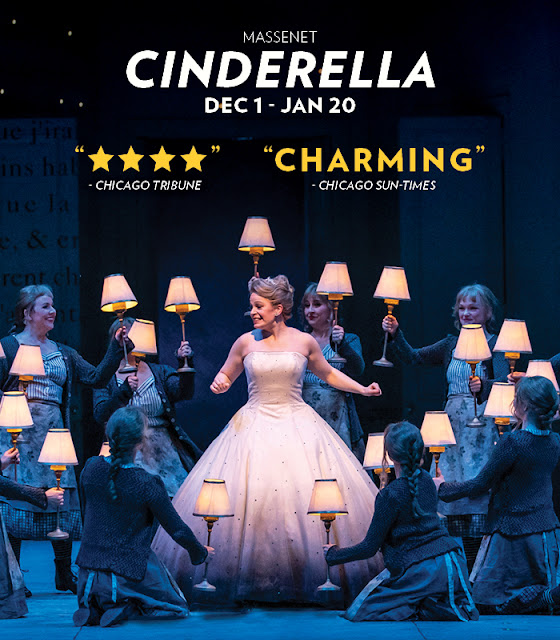 A whimsical retelling of the classic fairytale Cinderella, in which a mistreated girl overcomes the odds to find her Prince Charming -- with a little help from her fairy godmother.

· Family-friendly fun: Children and adults alike will love this familiar story and will marvel at the beautiful singing and charming visuals.

· A whimsical and inventive production: "I am thrilled to introduce this enchanting and magical piece to Lyric audiences for the first time," says Lyric general director Anthony Freud. "Laurent Pelly's production is endlessly witty and alluring, and Sir Andrew Davis, a distinguished interpreter of Massenet, will bring this beautifully romantic score to irresistible life."

·A feast for the senses! The hyper-theatrical costume designs by Laurent Pelly and Barbara de Limburg's clever set designs, which make scenery out of the storybook pages and words, are guaranteed to astonish and amuse. (The renowned director-costume designer and set designer are both French and both making Lyric debuts.) Duane Schuler's lighting designs enhance the magical atmosphere.

·A vibrant collection of courtiers has their turn in the spotlight through some of the most visually stunning and energetic scenes in the show, portrayed by the Lyric Opera Chorus, prepared by chorus master Michael Black. The original choreography for the ball scene by Laura Scozzi, with revival choreography by Karine Girard (both Lyric debuts), is a dance the audience won’t soon forget.

·A Cendrillon Chicago has not seen yet: This beloved production of Cendrillon is making its premiere at Lyric, and the opera itself has not graced Chicago since 1911—long, long ago!

· See it if you like: Family-friendly entertainment, a perfect date-night show, gorgeous music, enchanting visuals, and a blissfully happy ending!

·Running Time: 2 hours, 45 minutes with 1 intermission: Enjoy an exceptional live experience in the beautiful surroundings of the Art-Deco theater and foyer.

· For more information and to order tickets, visit lyricopera.org/Cendrillon or call 312-827-5600. Tickets start at $69 and special children's ticket prices ($20-$50) are available to order by phone. 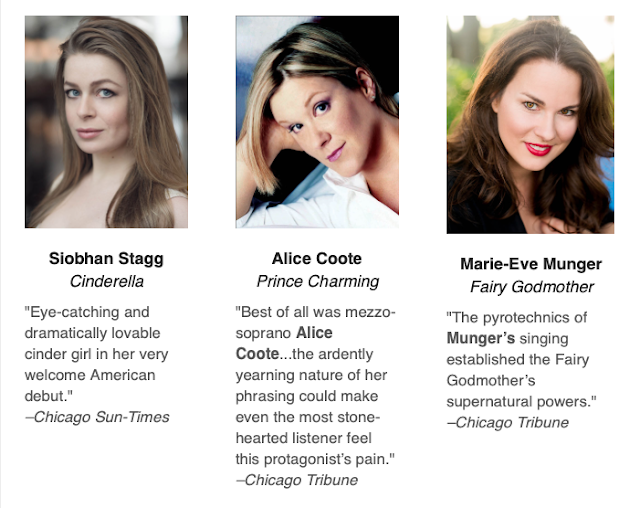 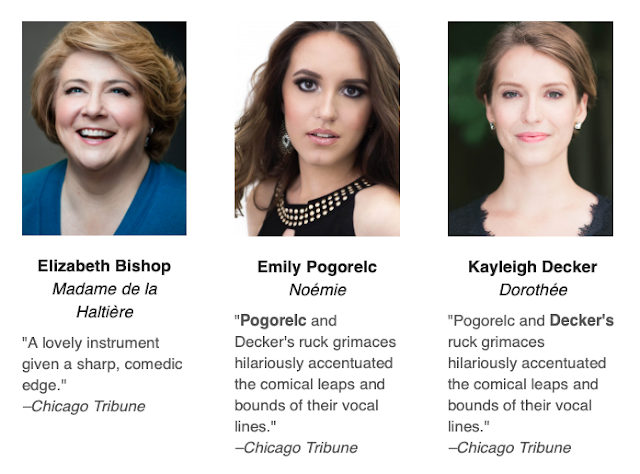 Posted by Bonnie Kenaz-Mara at 8:18 AM