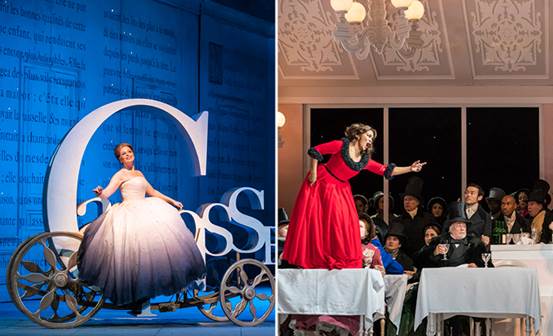 Lyric Opera of Chicago kicks off 2019 with two acclaimed productions: the return of the new production of Puccini’s captivating and tragic love story La bohème, and the Midwest premiere of a beloved production of Cendrillon, based on the Cinderella story. La bohème is a quintessentially Italian opera and the plot is forever youthful and eternally fresh. Cendrillon features an intelligent blend of wit, sensitivity, and elegance against the backdrop of a familiar storybook kingdom.

La bohème opened on October 6, 2018 to critical and audience acclaim and reopens on Thursday, January 10, 2019 at 7 p.m. for eight performances at the Lyric Opera House (20 N. Wacker Drive, Chicago) through January 31. Single tickets start at $39 and are available now at lyricopera.org/laboheme or by calling 312-827-5600.

Cendrillon premiered at Lyric on December 1, 2018 to the delight of audiences and critics alike, and retakes the stage on Friday, January 11 at 7 p.m. with three performances through January 20. Single tickets start at $49 and are available now at lyricopera.org/cendrillon or by calling 312-827-5600.

The cast for the January performances of La bohème is the same as for the October performances. Venezuelan-Swiss conductor Domingo Hindoyan will lead all but the Jan. 31 performance, which will be conducted by Stefano Sarzani in his Lyric debut. British director Richard Jones created the new production, with set and costume designs by Stewart Laing and lighting designed by Mimi Jordan Sherin. Michael Black is chorus master.

Lyric’s premiere presentation of Massenet’s Cendrillon generously made possible by the NIB Foundation and Invesco QQQ.

Posted by Bonnie Kenaz-Mara at 9:57 AM