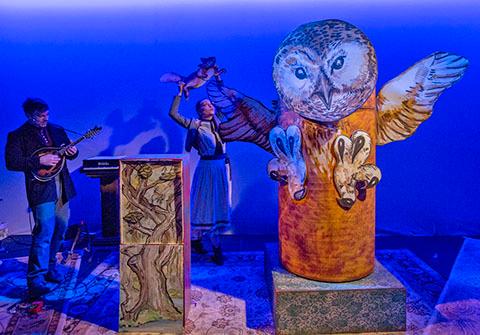 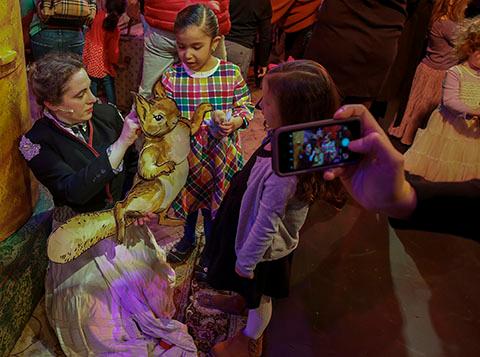 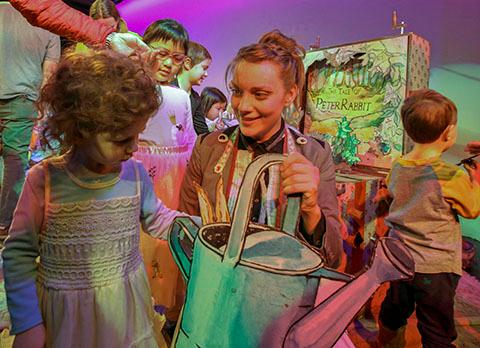 At Chicago Children’s Theatre’s annual holiday event, The Beatrix Potter Holiday Tea Party, inviting children and parents on set after the performance to meet the actors and play with the puppets and props is all part of the experience. Here, actor Kay Kron shows an audience member a water bucket prop. 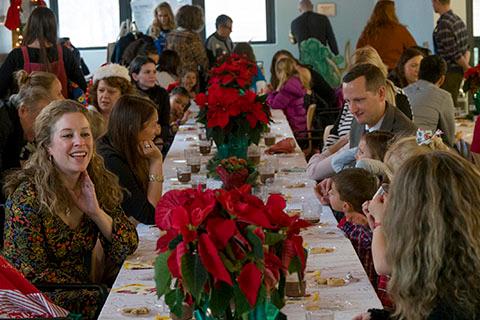 The Beatrix Potter Holiday Tea Party concludes with a
﻿tea and hot cocoa party in the theater’s lobby. 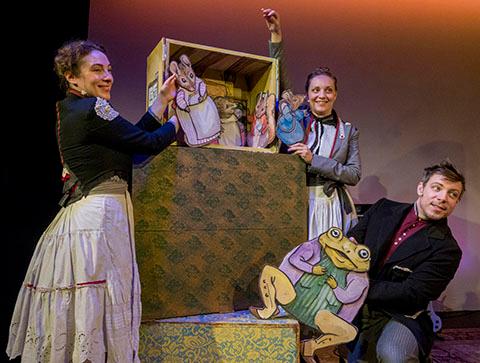 (from left) Lara Carling, Ray Rehberg and Kay Kron perform The Tale of Mrs. Tittlemouse, about a tidy little mouse, a messy toad and a number of creepy crawlies that show up at her house. 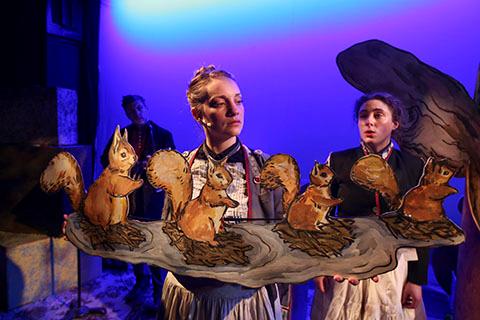 Kay Kron (foreground), flanked by Ray Rehberg and Lara Carling, in The Tale of Squirrel Nutkin, one of three classic tales that make up The Beatrix Potter Holiday Tea Party. 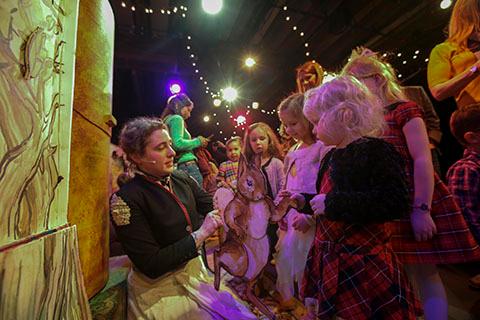 "Let your kiddos ask questions as they learn how the puppets are raised and lowered through cranks, how the wooden knobs make arms turn and eyebrows lower, and the magic of the wooden suitcase boxes." 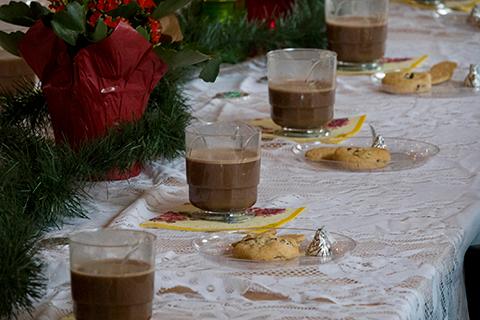 "...after the children rushed the stage to touch and feel the things they had just seen, we were ushered back into the theater’s lobby for hot cocoa and cookies. And, I’ve gotta admit, we enjoyed those Sunday morning treats, the both of us, with smiles on our faces at the wondrous tales we’d just been told." 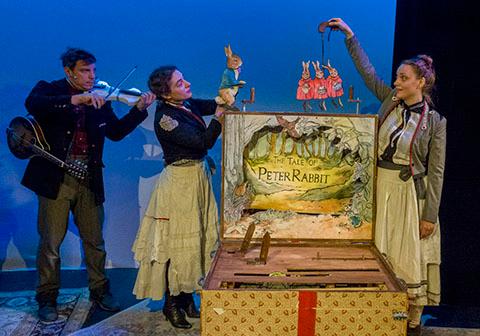 "The show was very interactive, and included singing and dancing, along with the manipulation of the wooden puppets to hold everyone's attention...If you are bringing your child to the theater for the first time, this would be a wonderful introduction." 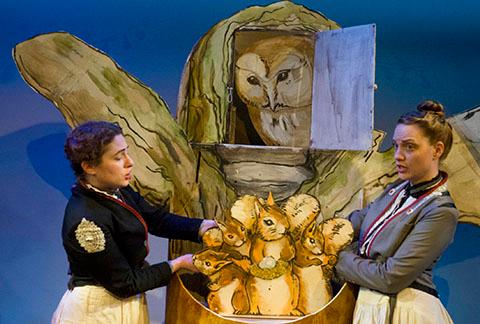 Chicago Children’s Theatre’s The Beatrix Potter Holiday Tea Party came into its own last holiday season, attracting more than a thousand toddlers, parents and grandparents, many dressed up in their holiday finest, to sold out performances during the show’s inaugural run in CCT’s new West Loop home, The Station.

This holiday season, children of all ages are getting dressed up and enjoying a charming, ingeniously designed puppet show plus a spot of hot cocoa with CCT’s favorite friends from the English Lake District now that The Beatrix Potter Holiday Tea Party has returned to Chicago Children’s Theatre.

But The Beatrix Potter Holiday Tea Party is more than a show. It’s a special occasion for families to celebrate the holidays together. In addition to enjoying a highly interactive puppet show starring Peter Rabbit and his quirky animal friends, Chicago Children’s Theatre’s bright, wide open lobby is a festive setting for a post-show tea party complete with hot cocoa, scrumptious cookies, beautiful holiday décor and the chance to meet and pose for photos with members of the cast.

Single tickets are $39 including fees. For subscriptions, single tickets and group rates, visit chicagochildrenstheatre.org or call Chicago Children’s Theatre Guest Services,
(312) 374-8835. This production is ideal for families with children ages 2 to 6.

Even better, it’s not too late to save money by including The Beatrix Potter Holiday Tea Party in a 2018-19 Chicago Children’s Theatre subscription. Multi-show subscription benefits include discounted tickets, flexible ticketing exchanges and discounts on CCT classes and camps. To subscribe, visit chicagochildrenstheatre.org or call
(312) 374-8835.

This year, The Beatrix Potter Holiday Tea Party returns with a trio of enchanting tales – the Tale of Mrs. Tittlemouse, about a tidy little mouse, a messy toad and a number of creepy crawlies that show up at her house uninvited; the Tale of Squirrel Nutkin, about a mischievous squirrel who taunts an old owl with musical riddles; and an updated version of Peter Rabbit, featuring new puppets and a brand new musical number.

Each story is told by three nimble actor/storyteller/musicians who simultaneously operate ingenious mechanical “suitcase sculptures” custom-built for this production. After story time, children and parents are invited on the set to explore, play, pull levers and turn cranks on the puppet-filled trunks to reveal magical 3-D images that surprise and delight.

Beatrix Potter (1866-1943) was a British writer, illustrator and conservationist best remembered for her best-selling children’s books that combined her love for animals and the English countryside. During her childhood in England’s Lake District, she looked after many animals including rabbits, frogs and even bats. She drew these animals throughout her youth, gradually improving the standard of her drawings. In her 20s she sought to try and get her children’s book and drawings published. Her initial attempts proved unsuccessful, but she persevered and eventually her first book The Tale of Peter Rabbit, was published in 1902, when she was 36. Today, Peter Rabbit is one of the most beloved children’s books of all time. In sum, Potter wrote 24 books. Some of her best know titles include The Tale of Mrs. Tiggy-Winkle, The Tale of the Pie and the Patty-Pan and The Tale of Mr. Jeremy Fisher. For more information, visit the Beatrix Potter Society, beatrixpottersociety.org.uk.

CCT continues to grow its commitment to all Chicago children at The Station by expanding services for patrons with disabilities. Access Weekend is December 22 and 23. Services include:

ASL interpretation will be available Saturday, December 22 at the 11:30 a.m. performance.

Open Captioning will be provided at the 11:30 a.m. and 2 p.m. performances on Saturday, December 22.

Both shows on Sunday, December 23, 11:30 a.m. and 2 p.m., are sensory friendly performances. A quiet room and family restroom will be available.


﻿What’s Next at Chicago Children’s Theatre 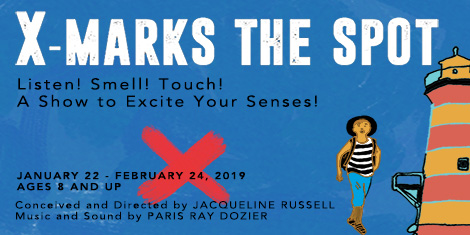 After the New Year comes X-Marks The Spot, a new inclusive sensory work conceived by CCT Artistic Director Jacqueline Russell to highlight the experience of blind and low vision audiences. This production will excite your senses with sounds, voices, and touchable, scented props. A low-light setting and a gentle invitation to use blindfolds encourages audience members not to rely on their sense of sight, but instead to tune in to their other four senses to experience EST, or “Extra Sensory Theatre.” Performances are January 22-March 3, 2019. Ideal for ages 8 and up.

Next, CCT hosts New York’s Spellbound Theatre’s The World Inside Me, a new form of educational arts experience designed specifically for pre-K youth. This world premiere production is part art and part science, showcasing the creative abilities of our youngest children while celebrating the human body, following human development from pre-natal through age five. Performances are February 9-March 10.
﻿

Chicago Children’s Theatre’s 13th season finale is the world premiere of The Watsons Go to Birmingham – 1963, based on the groundbreaking, timeless young adult novel by Christopher Paul Curtis, adapted by Cheryl L. West, directed by Wardell Julius Clark. Performances are March 26-April 28. For ages 9 and up.

For tickets, subscriptions and group rates, visit chicagochildrenstheatre.org or call (312) 374-8835.

About Chicago Children’s Theatre, The Station

Since its launch in 2005, CCT has cemented its reputation as the city’s largest professional theater company devoted exclusively to children and young families. The company evolved out of Chicago’s need for high-quality, professional children’s programming to match the quality and significance of powerhouses such as Steppenwolf, Goodman and Lookingglass. In 2017, Chicago Children’s Theatre became the first theater for young audiences in the nation to win a National Theatre Award from the American Theatre Wing, creators of the Tony Awards.

﻿In addition to presenting live shows in The Station’s intimate 149-seat Pritzker Family Studio Theatre, Chicago Children’s Theatre continues to grow its education and community programs, which are unique in Chicago for emphasizing student authorship, youth empowerment and community leadership. CCT now offers year-round education programming at The Station for ages 0 to 13, including the city’s most diverse roster of classes, specialized workshops, winter and spring break camps, and a full slate of summer camp experiences. Visit chicagochildrenstheatre.org/education, email education@chicagochildrenstheatre.org, or call CCT’s Guest Services,
(312) 374-8835, to register your child for one class or many.

For more, visit chicagochildrenstheatre.org.
Posted by Bonnie Kenaz-Mara at 4:31 PM