Review:
Marriott's Newsies is a fabulous feel good story on the power of protest. Who doesn't enjoy an underdog tale, especially one based on actual events and involving a scrappy, determined group of poor children triumphing over filthy rich New York media moguls. I also adore the early feminist plot line, where Eliza Palasz as “Katherine Plumber” defies her famous father and proves that women can write serious news stories and change history.

Patrick Rooney as “Jack Kelly” is a standout as well. We also enjoyed the spirited performances of some of the smallest cast members, long time Chicago favorites, Matthew Uzarraga (Crutchie) and Zachary Uzarraga (Les or Hot Shot, Ensemble).

I loved the set design (Kevin Depinet), from the clotheslines extending outward over the audience, to the clever, multi level pieces, descending or ascending to the ceiling as needed, to alter the theatre in the round staging. As always, Marriott Theatre's casting is superb and the choreography catchy and creative (Director and Choreographer Alex Sanchez).

In our current, union busting political climate, where income disparity is bigger than ever, Newsies is a timely choice. There's strength in numbers, and wrongs can be redressed by a vocal group of protestors. The pen is mightier than the sword and can be wielded well by a woman, the lowliest day job may be held by a talented artist (so don't judge), and advocates and allies can come in unlikely packages, like feathers and corsets.

This is a great pick for multigenerational appeal and family friendly memory making. It's also a clever clutter busting gift idea just in time for the holidays.

It was our pleasure to review the Broadway touring production last year, and Marriott Theatre's take on this Tony Award-winning musical gives the Broadway show a run for the money. This energetic production is a holiday must see. Highly recommended.

Click here to book your tickets, get a full rundown on this stellar cast's bios, and find further show details. 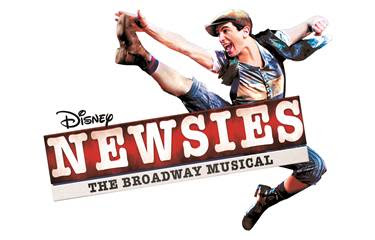 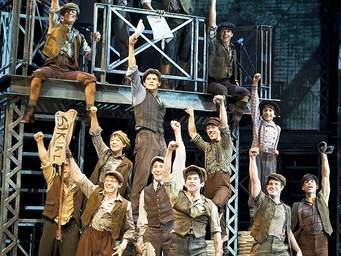 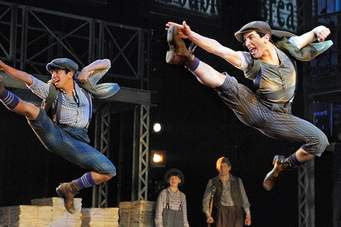 To make a restaurant reservation, please call 847.634.0100. Free parking is available at all performances. To reserve tickets, please call The Marriott Theatre Box Office at 847.634.0200 or go to www.ticketmaster.com. Visit www.MarriottTheatre.com for more information.
Posted by Bonnie Kenaz-Mara at 10:31 AM