13 Must See Holiday Productions In Chicago For 2017

CHICAGO THEATERS GET FESTIVE
FOR THE HOLIDAY SEASON
WITH TRADITIONAL FARE, CLASSICS WITH A TWIST,
SIDESPLITTING COMEDIES AND LARGE-SCALE MUSICALS
GRACING STAGES ACROSS CHICAGOLAND 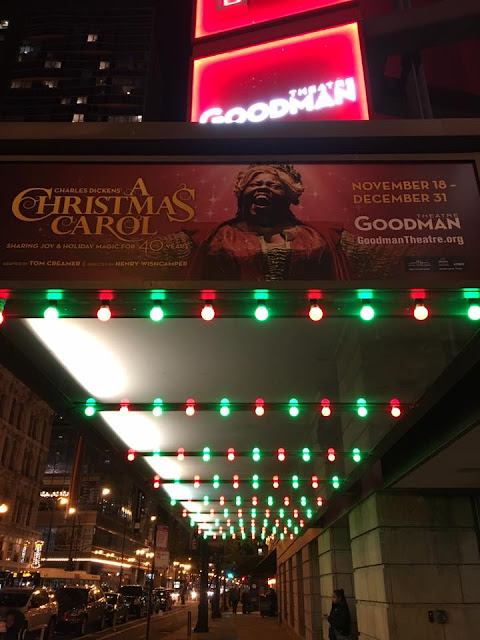 Here at ChiILMama.com (family friendly) & ChiILLiveShows.com (adult) we adore theater. Tickets make a great clutter busting gift idea for family and friends and a unique chance to make memories and entertain out of town guests this holiday season. Check back with us like we vote in Chi, IL... early and often. We have loads of theatre news, original reviews, ticket giveaways, interviews, photo and video filled recaps and more. **We've highlighted our top picks and the shows we'll be reviewing this season in red and we'll be adding more throughout the month.**

The Chicago theater community will present a wide variety of festive plays, musicals, dance and concert offerings this Holiday season.  In support, the League of Chicago Theatres will create its annual comprehensive Holiday Theatre Guide that will be available beginning in mid-November at hotels, theaters, events, and destinations across the Chicago area. An updated list of holiday shows with additional details about each production will be available throughout the season at ChicagoPlays.com. Additionally, many holiday shows will be available at Hot Tix, Chicago’s local, half-price ticketing service.

This holiday season, Chicagoland audiences will have numerous opportunities to take in various productions of holiday classics including A Christmas Carol and The Nutcracker.  From traditional classic renderings to contemporary retellings of these favorites, there is something to fulfill all holiday wishes.

Audiences looking for classic fare can enjoy the 40th Anniversary production of A Christmas Carol at the Goodman Theatre or another traditional version at Metropolis Performing Arts Centre. Scrooge and the Ghostly Spirit, a world-premiere musical version, will be presented at the Citadel Theatre in Lake Forest. Those looking to turn up the volume on the Charles Dickens’ classic tale may instead choose the hip-hop retelling with Q Brothers Christmas Carol at Chicago Shakespeare Theater’s The Yard space.

Looking for a new twist on The Nutcracker? Dance enthusiasts may indulge in The Joffrey Ballet’s critically-acclaimed production of Christopher Wheeldon’s staging of The Nutcracker, set during the Chicago’s 1893 World’s Fair, or choose the unique, ballet-free version from The House Theatre of Chicago. Those seeking affordable full-length classic productions of The Nutcracker may also turn to McAninch Arts Center or Salt Creek Ballet at North Shore Center for the Performing Arts.

In need of a few laughs this holiday season? Chicago comedy staple The Second City will present an all new Holidazed & Confused Revue: Mandatory Merriment, while the Nut-Cracking Holiday Revue will play at Metropolis Performing Arts Centre.  Holiday horror stories abound in Mitchell J. Fain’s This Way Outta Santaland (and other Xmas miracles) at Theater Wit as well as in the more family-friendly That's Weird, Grandma: Holiday Stories presented by Barrel of Monkeys at The Neo-Futurists. Chicago’s favorite cross-dressing reindeer is back in Hell in a Handbag’s Rudolph the Red-Hosed Reindeer, one of the city’s best anti-holiday, holiday shows.

Large musical productions will also be on display across Chicagoland, including the classic Chicago tradition The Christmas Schooner at The Mercury Theater. Broadway in Chicago will present Irving Berlin’s White Christmas The Musical, featuring the beloved songs of the Bing Crosby movie and more, at the Cadillac Palace Theater downtown. The Paramount Theatre in Aurora will present Elf: The Musical, based on the hilarious 2003 Will Farrell movie.

SCROOGE AND THE GHOSTLY SPIRIT is a world-premiere musical based on Charles Dickens’ A Christmas Carol. Runs November 14 - December 23, 2017 at the Citadel Theatre in Lake Forest.

Throw your hands up, Chicago—the holiday treat set to a bangin’ beat is back! CST and Chicago hip-hop sensation the Q Brothers—creators of Othello: The Remix and Funk It Up About Nothin’—turn up the volume on Q BROTHERS CHRISTMAS CAROL. Runs November 21 - December 31, 2017 at Chicago Shakespeare Theater’s The Yard space.

Journey inside Chicago's 1893 World's Fair with Christopher Wheeldon's critically-acclaimed holiday masterpiece THE NUTCRACKER with the Joffrey Ballet at the Auditorium Theatre. Runs December 1 - 30, 2017.

The House Theatre of Chicago presents its wholly original, ballet-free, fast paced and family-friendly version of THE NUTCRACKER at the Chopin Theatre, weaving dance, text, and songs to tell a story of magic and mystery. Runs November 4 - December 30, 2017. **4 Ticket Giveaway at ChiILMama.com.

Holiday comedies include:
The Second City presents a holiday tradition that doesn’t include setting up a 6-ft fire hazard in the living room, or placing your kids on the lap of an elderly alcoholic at the local mall, HOLIDAZED AND CONFUSED. Runs at The Second City on the Mainstage on Mondays, November 20 – December 27, 2017, as well as in UP Comedy Club, November 15 – December 30, 2017.

'TWAS THE NIGHT BEFORE CHRISTMAS is a fantastic, slapstick holiday affair for all ages. When Santa Claus' "Naughty or Nice" list goes missing, it's up to a pair of dancing mice, a spunky girl, and an Elf-B-I agent to solve the mystery before Santa boards his sleigh. Presented by Emerald City Theatre at the Broadway Playhouse and runs November 10 - December 31, 2017.

This year, join Mitchell J. Fain for a Very Special Xmas Special(tm) as he pulls together a host of Boozy Christmas carols holiday stories from the audience, his own life and war stories in THIS WAY OUTTA SANTALAND (AND OTHER XMAS MIRACLES). Runs November 24 - December 30, 2017 at Theater Wit.

Chicago’s favorite cross-dressing reindeer is back and he’s 21 years old! Hell in a Handbag closes its season with its most popular show ever RUDOLPH THE RED HOSED REINDEER. Join Rudolph and all of his misfit friends as they struggle with fitting in and being normal in an increasingly abnormal world. Runs November 25 - December 30, 2017 at Mary’s Attic.

Holiday-themed musicals include:
The classic Chicago musical THE CHRISTMAS SCHOONER sets sail again at The Mercury Theater featuring a powerful, moving story, an exquisite score of original music and traditional holiday favorites, and a company of 25 actors and musicians. Runs November 24 - December 31, 2017.

The uplifting story and beloved songs of Bing Crosby' movie White Christmas have been enjoyed by families for generations. Now, you can continue the timeless tradition with your family at this glorious and exciting live production! IRVING BERLIN’S WHITE CHRISTMAS THE MUSICAL will be showing at the Cadillac Palace Theater. Runs November 21 - December 3, 2017.

ELF: THE MUSICAL, based on the hilarious 2003 Will Ferrell movie, will be presented at the Paramount Theatre, November 22, 2017 – January 7, 2018. BARNEY THE ELF, musical parody of Elf starring Yando Lopez and Chicago drag queen sensation Dixie Lynn Cartwright, also returns for the third year. This campy musical brings songs galore and plenty of queer holiday cheer to the Greenhouse Theater Center. Runs November 25 - December 31, 2017.

Holiday Savings at Hot Tix
Hot Tix offers half-price tickets to a wide variety of theatre productions for the current week, as well as future performances, including many holiday selections for the whole family. Half-price tickets are available online at HotTix.org, easily searchable by date, show, theatre, or genre, or buy in-person at downtown Hot Tix outlets.

Play Money Gift Certificates
Play Money is redeemable at more than 75 area theatres. Play Money can be purchased in person at the 72 E. Randolph Hot Tix location or over the phone by calling 312.554.9800.  The gift certificates are sold in $25 denominations and are valid for a full year after purchased. Click here to download a list of theatres that accept Play Money.

About Chicago theater
Chicago theater is the leader in the U.S. with more than 250 theaters throughout Chicagoland, comprising a rich and varied community ranging from storefront, non-union theaters to the most renowned resident theaters in the country, including 5 which have been honored with Regional Tony Awards, and the largest touring Broadway organization in the nation. Chicago’s theaters serve 5 million audience members annually and have a combined budget of more than $250 million. Chicago produces and/or presents more world premieres annually than any other city in the nation. In 2015-16 alone Chicago theater companies produced more than 100 world premiere productions and adaptations. Each year Chicago theaters send new work to resident theaters across the country, to Broadway, and around the world.

For a comprehensive list of Chicago productions, visit the League of Chicago Theatres website, www.chicagoplays.com.  Discounted tickets are available at www.hottix.org.
Posted by Bonnie Kenaz-Mara at 11:43 AM