REVIEW: “Magic is Real” at The House Nutcracker! 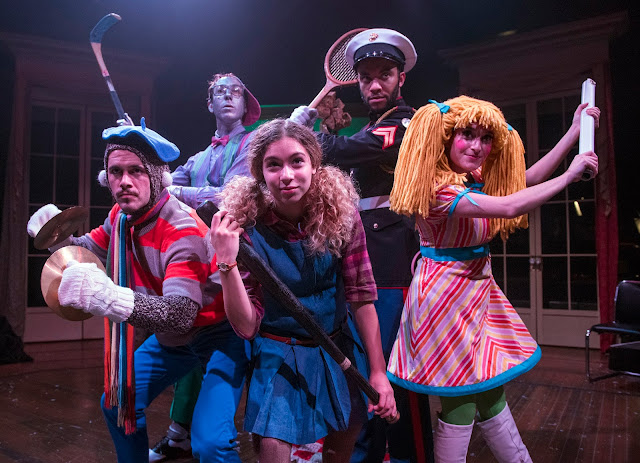 The House Theatre of Chicago indeed produces magic. It is tough to be a Scrooge, even this early in the season on the night of our first snowfall, and resist the Christmas spirit with this delightful production of The Nutcracker. Everything feels merry and bright in the theater, from the lovely set with its numerous tall, elegant doors, the decorated Christmas tree, to the cast mingling with the crowd before the performance. There is such a big party atmosphere that gets everyone in the audience involved in the energy and enthusiasm.

It’s hard to believe that this is the same space where I saw United Flight 232 just two months ago with its tunnel leading to the interior of the airplane. Or flying monkeys in Oz last March. Now the Chopin Theater is transformed with holiday cheer. The creativity and surprises that persist at House Theatre always amaze me. Little touches abound, like when each actor making an entrance from outside tosses a handful of fake snow into the air upon entrance, as if just stepping in from the cold. 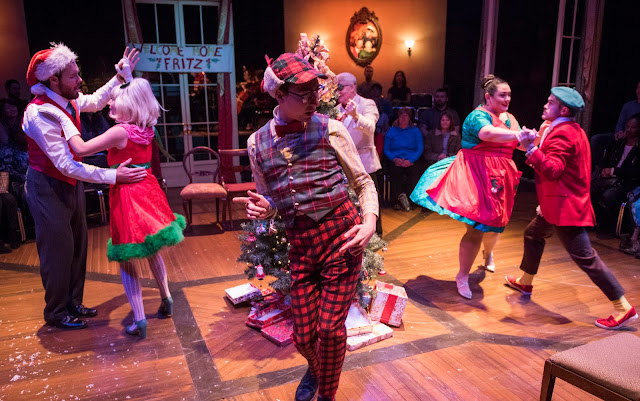 The show begins with a Christmas gathering of family; spirits are high as beloved son Fritz, a soldier, is due home for the holidays. The transition from gaiety to tragedy (spoiler alert!) is shocking as a somber figure appears suddenly at the door, dashing the party, a dreadful, military-folded funeral flag in hand. The Christmas tree is carried out like a coffin with pall bearers. The contrast is astounding. As my new BFF Kait Mikitin, the Audience Services Manager, told me,” Some audience members weep at that part or even walk out.” But that would be a shame to miss Clara’s grand adventure with her animated friends. 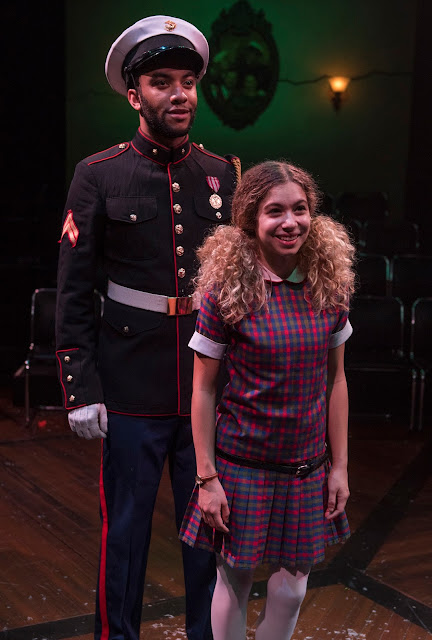 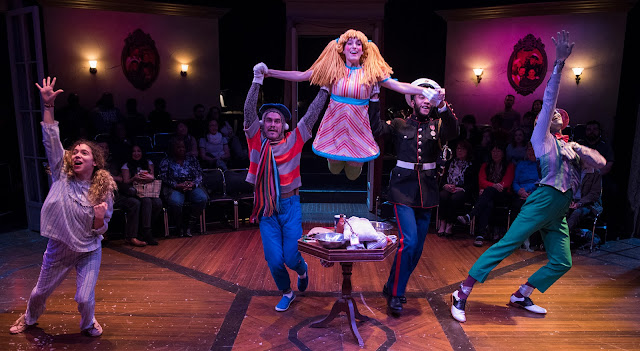 Just as in the familiar version of The Nutcracker, Drosselmeyer is an intense, curious figure, both loving and slightly sinister. Torrey Hanson does not disappoint as the uncle everyone wants to have around for his company and awesome presents. (Everyone should have an Uncle Drosselmeyer who adores them and spoils them.) His gift is an odd one this time, a nutcracker version of her revered brother, Fritz. 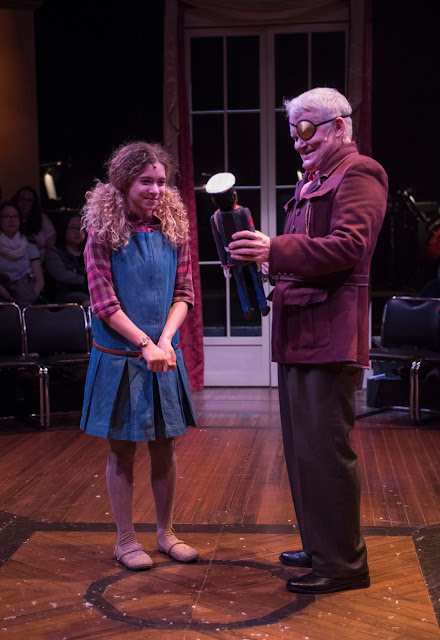 Haley Seda as Clara poignantly sings to her toys, and uses different funny voices to have them “respond” to her.  These toys later come to life and have the voices she portrayed earlier. 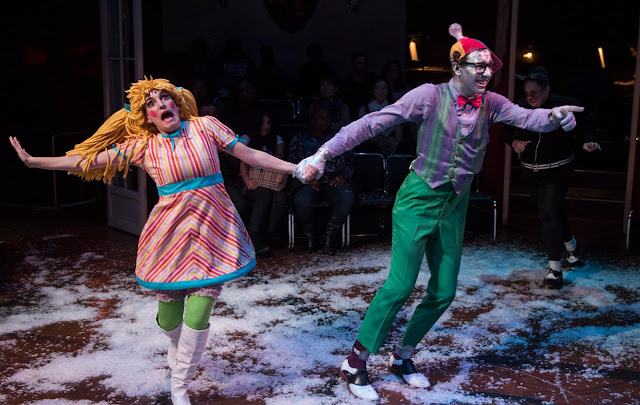 The three toys are all so enchanting and wonderful, it is hard to pick a favorite. Rachel Shapiro as Phoebe the Doll has a good voice she uses to great effect in their songs. (I loved her yarn hair!) Ian Maryfield as the French sock monkey has a hilarious French accent and a couple of the best lines in the show. He was very playful and would startle and interact with audience members which was a hoot. Ben Hartel as Hugo, with his light-up hat, is the...uh...strange clown-like creature, was adorable and had great physical presence. All of them were dancing with children in the audience at intermission which was just charming. 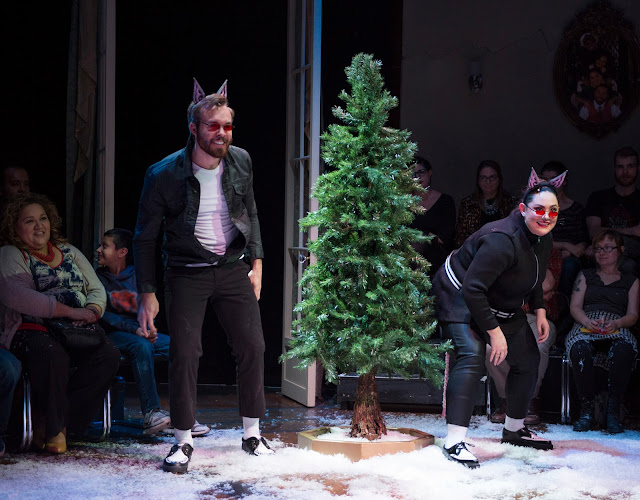 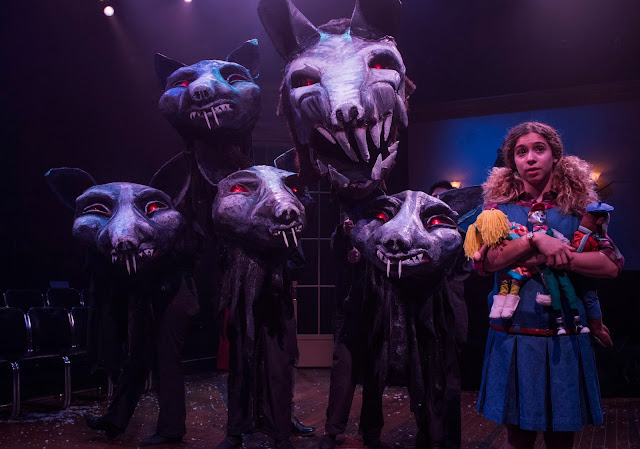 Which brings up another point: this is a family-friendly show that kids can attend, although little ones might get a bit freaked out by the rats appearing in Act II. They are a bit creepy…   During one scene, an actor asked a question in the dialogue, and a small voice in the crowd answered. It was sweet and speaks to how this show is magical in its power to draw us in.

My teen daughter thought “the walls opening up was cool.” Again, this is a trademark of House Theatre and how clever their theatrics are. When I asked my girl what she thought of the show, she answered: “The rats wanted Clara to stay in darkness with her brother, but she chose to enter the light where he was dead. It was like a closure thing.” Sounds like someone is paying attention in English class! 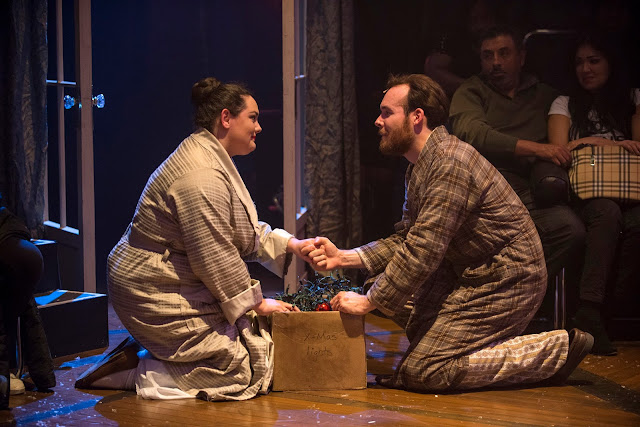 Be sure to make a point of seeing House Theatre’s The Nutcracker this holiday season.  So much is going on in this show that you can see it repeatedly to catch the magic you missed the first time around. If you have family or out-of-town guests visiting over the holidays, this would be an unusual, hip holiday show for you to share with them that isn’t the typical fare. Be sure to buy a “Magic is Real” or “Time to Make Cookies” button at the Swag counter while you are there.

The House Theatre of Chicago once again brings holiday cheer for the whole family with its eighth annual engagement of the all-original, ballet-free The Nutcracker playing at The Chopin Theatre upstairs theatre, 1543 W. Division, November 3 – December 30. Company Members Jake Minton, Phillip Klapperich, Kevin O’Donnell and Tommy Rapley created the adaptation. New to the 2017 holiday production, based on E.T.A. Hoffmann’s story, is director and Company Member Chris Mathews with original direction and choreography by Tommy Rapley.

Preview tickets are $15 with regular run tickets $25 – $50. Student and industry same-day discounted tickets are available for $15 for all dates, based on availability. Tickets may be purchased by calling 773.769.3832 or by visiting www.thehousetheatre.com.

The Nutcracker is adapted from “The Nutcracker and the Mouse,” a story by E.T.A.
Hoffmann by Jake Minton, Phillip Klapperich, Kevin O’Donnell, and Tommy Rapley.


Note: There are no performances on Christmas Eve, Sunday, Dec. 24th. 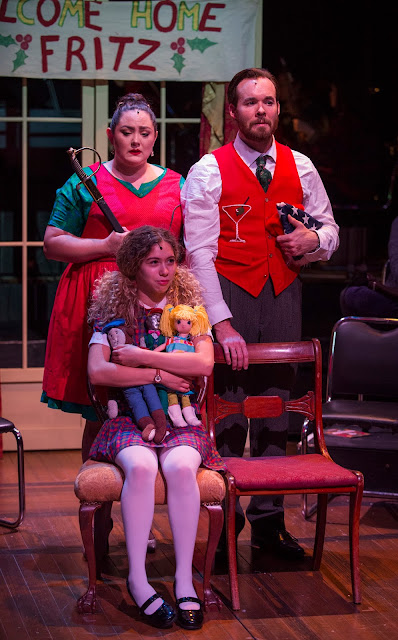 Email ThisBlogThis!Share to TwitterShare to FacebookShare to Pinterest
Labels: Chicago holiday must sees, Holiday themed shows in Chicago 2017, review, The House Nutcracker, THE HOUSE THEATRE OF CHICAGO, The Nutcracker, The Nutcracker at House Theatre