“THE AMERICAN REVOLUTION”
LIKE YOU’VE NEVER SEEN IT BEFORE
Think history is dry and boring--think again. Suspend your disbelief as 7 actors suspended on a platform bring history to life in 50 minutes and 21 square feet! Now that's a feat. Come check it out. We'll be there to review November 8th. Get your tickets before this show is history! 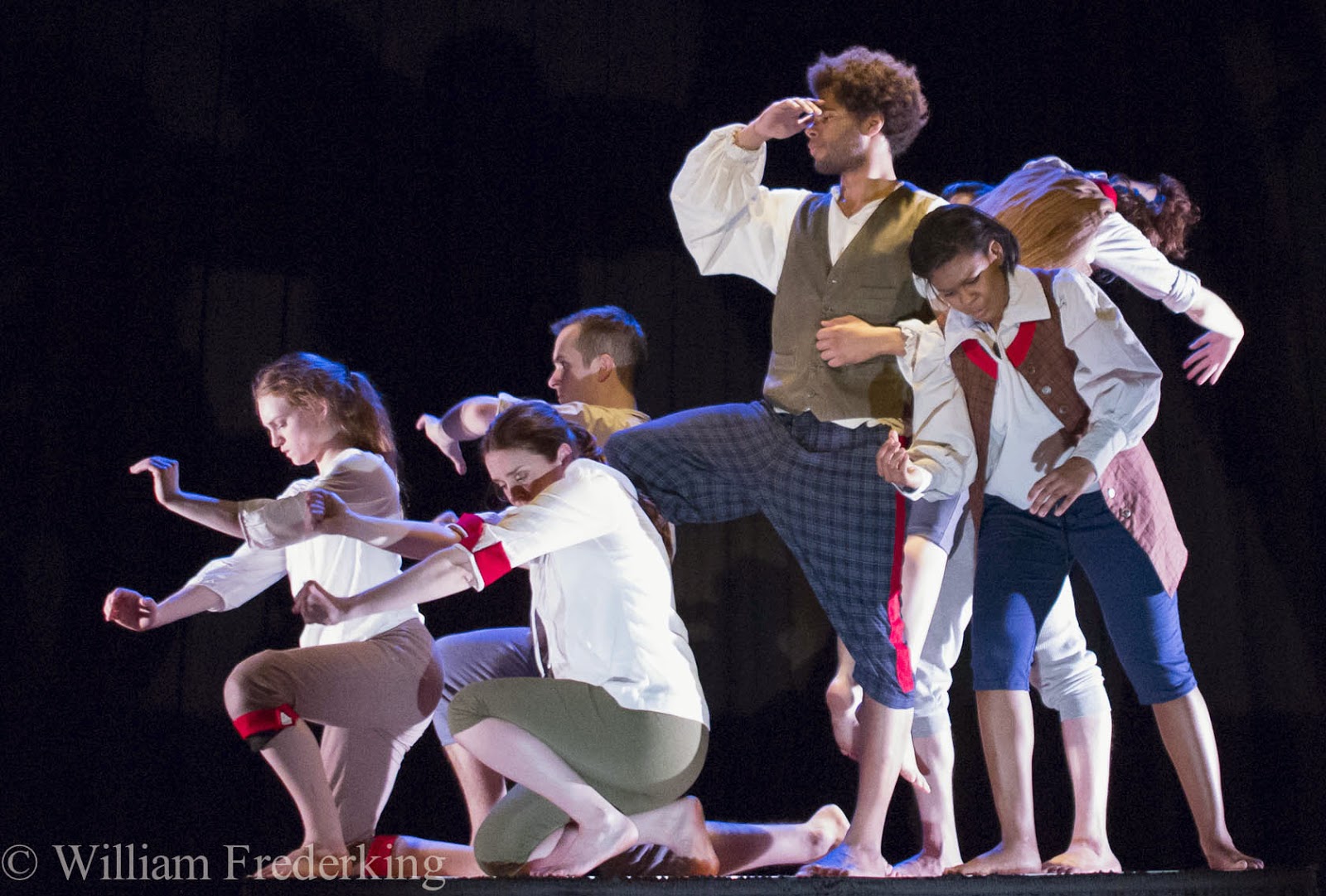 Theater Unspeakable’s Highly Original Take on the Country’s Founding Fathers Will Be Staged at the Vittum Theater, November 4-29
From The Patriot to John Adams, from the iconic portrait of Washington Crossing the Delaware by Emmanuel Gottlieb Leutze to the musical 1776, the birth of our nation has been portrayed countless times in countless ways in the arts. But never quite like this.
Adventure Stage Chicago, a program of Northwestern University Settlement Association, proudly presents Theater Unspeakable’s production of The American Revolution, a critical history lesson in 50 minutes, from November 4-29 at the Vittum Theater, 1012 N. Noble St. in Chicago.
Seven actors—suspended on a platform two feet off the ground—share 21 square feet of space to recreate the entire heroic fight for American independence from Lexington to Yorktown. Using only the actors’ bodies, voices and (pantomimed) cannons, the show evokes an epic time period in American history. Combining tongue-in-cheek humor with a dash of derring-do, The American Revolution displays Theater Unspeakable’s company’s rowdy brand of bare-boned and imaginative physical theater in the company’s first ever extended run in Chicago.
“The country's founding had an imperfect beginning, built upon the sacrifice, slaughter, and subjugation of many individuals and peoples,” said Marc Frost, director of “The American Revolution” and founder of Theatre Unspeakable. “I want them to leave feeling proud of their country's founding, because it truly was the dawning of a new era for personal freedom; yet, even in its most beatified heroes, we see the flaws, the human shortcomings, which to me make the achievements all the more inspiring. We also hope they laugh, too.”
“At Adventure Stage we tell heroic stories about young people. Theater Unspeakable’s The American Revolution is a continuation of this work, but with an intriguing twist,” said Tom Arvetis, Producing Artistic Director of Adventure Stage Chicago. “Here we have not a young person, but a young country.  A country by all measures still in the very early stages of its life but unmistakably called toward its own independent future. With The American Revolution, Theater Unspeakable looks back on the birth of our country with their delightfully dexterous approach to storytelling and invites us to imagine what freedom looks like almost 240 years later.”
THE AMERICAN REVOLUTION DATES, TIMES AND TICKET INFO
Public Performances will take place November 8, 15, 29 at 4 p.m., and November 14, 21, 28 at 7:30 p.m.; Student Matinees will take place November 4-6, 13, 18, 19, 20, 25 at 10:30 a.m.
Tickets for all shows are $17 for adults, $12 youth aged 14 and under and groups of ten or more; $7 previews.  Student groups begin at $7. *A special $10 ticket is available to neighbors in the 60622 and 60642 zip codes. The American Revolution is performed at Vittum Theater, 1012 N. Noble St., in the heart of Chicago’s West Town neighborhood. Street parking is available, and the theater is close to the Noble St. stop on the #56 Milwaukee bus line and the Division stop on the CTA Blue Line. The theater is wheelchair accessible.
For more information, call (773) 342-4141 or visit www.adventurestage.org
Adventure Stage Chicago is funded by Banco Popular , Grover Hermann Foundation, Kinder Morgan Foundation, Lloyd A Fry Foundation, I.A. O’Shaughnessy Foundation, Illinois Arts Council, The MacArthur Fund for Arts and Culture at Prince, Paul M Angell Family Foundation, Polk Bros Foundation, RBC Foundation – USA, Searle Funds at the Chicago Community Trust
ABOUT THEATER UNSPEAKABLE
Marc Frost started Theater Unspeakable as a platform for creating new works of devised, physical theater. Based in Chicago, the company is dedicated to telling stories using the entire mind, body, heart and soul. Working indoors and outdoors, the company creates live theatrical performances combining elements of movement, dance, mime, circus and clown. Since 2010, the company has created three original pieces including “Superman 2050,” “Murder on the Midwest Express” and “The American Revolution”. Theater Unspeakable has toured these pieces at various venues including: Lincoln Center, McLean Community Center, Chicago Humanities Festival, The Second City and the Chicago Cultural Center.

ABOUT ADVENTURE STAGE CHICAGO
Adventure Stage Chicago creates and tells heroic stories about young people. We do this to engage our community and inspire all of us to be heroes in our own lives. This is our 11th season.


Adventure Stage Chicago is a program of Northwestern University Settlement House, the oldest continually operating settlement house in Chicago. Throughout its 122-year history, the Settlement has remained committed to providing resources that empower neighbors to overcome the obstacles of poverty. Adventure Stage extends this mission by presenting Chicago's young audiences, educators and families with affordable artistic experiences rooted in performance.
Posted by Bonnie Kenaz-Mara at 7:17 PM