Alice Opening At Lookingglass And Closing At Upended #theatre

The Chicago Theatre scene is a microcosm, a world of it's own full of magical coincidences and oddly interwoven themes. This season is no exception. We're way beyond stoked here at ChiIL Mama/ChiIL Live Shows that one of our favorite stories is springing to life in parallel universes in very different ways.

Alice (of Wonderland fame) is popping up in mirror worlds across town, at the aptly named Lookingglass Nov 12-Feb 15 and all over Andersonville (beginning at the Neo-Futurarium) in an "ambulatory, multi-disciplinary theatrical experience" through Nov. 2. These productions are both highly anticipated remounts and we can't wait to catch it all! 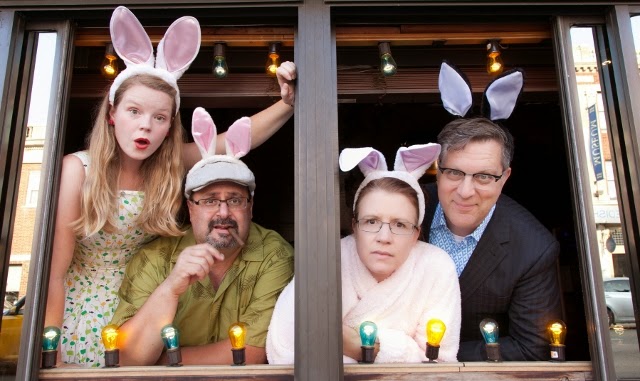 8 Andersonville venues, 9 artists, 12 chapters, 6 rabbits, 1 wild afternoon. Noelle Krimm gives audiences a seat at the tea party with a re-imagining of her 2004 hit, Alice. The show runs through with tours beginning at 1:00 p.m. and leaving every 15 minutes until 2:00 p.m. All tours start at The Neo-Futurarium, 5153 N. Ashland. Space is limited and advanced purchase is very highly recommended. Don't be late!


Recommended by The Trib, The Sun-Times, The Reader, Newcity Stage and more, here’s what some of the critics had to say about 2004’s Alice.
Upended Productions’ Alice – The reviews are in!!
Stage and Cinema Raves!
“Throughout the whimsical and comic episodes, there are consistent reminders of the subjective nature of reality, a medicine that goes down easily, delivered as it is with a bit of sugar—not pepper—and a wry touch. Attend Alice with an open spirit and light heart, or arrive as a grump and a cynic and leave with a smile and a less-heavy step nonetheless.”                    -Erika Mikkalo
Recommended by New City!
“Other standout vignettes include the most interactive portions, like the tea party and croquet game led by the ShowParty! collective. A headier but equally captivating highlight is the eleventh chapter from Sid Branca & Amanda Fink, staged in a pet supply shop, wherein the trial over the tarts becomes a sort of nonsensical polemic attack on meaning and ownership while revealing much truth through almost aggressive wordplay.”                                                              - Raymond Rehayem
Recommended by Chicago Theatre Review!
“But Alice is more than its ambulatory conceit—it also features witty and imaginative writing that gets to the emotional core of the original. Chad the Bird’s meditations on humans and animals seemed both apt and fitting for a story that is filled with many anthropomorphic animals. A final scene towards the end of the play poses a choice between dreams and the reality that inspires them. Alice is ultimately a fun production that is at times unfaithful to the letter of the original, but fully faithful to its spirit. It invites you to stroll through its Wonderland, but urges you to eventually wake up, refreshed, from the dream.
- Ivy Perez
And perhaps most importantly...
10-year-old theater critic Ada Grey of Ada Grey Reviews For You had a blast!
“People who would like this show are people who like bunnies, insanity, and lollipops. I think should definitely see this show. It is so funny, and I had so much fun, and I think you should bring all your best friends to it because they will have a lot of fun. It is basically like you get to go on the experience of going to Wonderland with your friend.”                               -Ada Grey
Alice is an ambulatory, multi-disciplinary theatrical experience. The audience, traveling in groups of 15, follows a white rabbit to various locations throughout the Andersonville neighborhood. Ducking into storerooms and back patios, through bookstores and taverns and galleries, the audience IS Alice and the Andersonville neighborhood becomes a wonderland. Chapters of the book are divided amongst Chicago fringe theater companies, visual and film artists and performed in various locations throughout the neighborhood.
Locations include: The Neo-Futurarium, Simon's Tavern, The Landmark of Andersonville, Woolly Mammoth Antiques and Oddities, Rad Vintage, George's Ice Cream and Sweets, The Swedish American Museum, and Women and Children First Bookstore.
(Wow! Just WOW. So many of our favs are representing here.)  Alice features original work by: The Neo-Futurists, Striding Lion Performance Group, The Whiskey Rebellion Theatre, ShowParty, Sophisticated Cornbread, David Kodeski, Corrbette Pasko, Emmy Bean, Josh Zagoren, Greg Allen, Bilal Dardai, Dina Walters, Logan Kibens, John Randle and other special guests.
Don't sit in the dark and wait to be entertained. Be Alice. Chase the rabbit!
Noelle Krimm states, "I originally created the show for The Neo-Futurists in 2004. It was a great success and I have often thought of remounting it. This fall is the 10th anniversary of the first production and it falls at a time when I think we all need to be able to look around and see a little wonder."
Noelle Krimm (Creator/Rabbit) After being thoroughly educated in theater/musical theater performance at the Florida School of the Arts and Florida State University, Noelle became a Neo-Futurist ensemble member in 1999 where she wrote and performed regularly in their signature show, Too Much Light Makes the Baby Go Blind for 10 years (and still comes back every once in a while). While with The Neo-Futurists, Noelle also created several full-length original shows including The Neo-Futurists' first full-length musical, City Girl!, which had an extended run in Chicago in 2002 and went to the Minnesota Fringe Festival in 2003 where it won Artists' Choice and Critics' Choice for Best Musical. In 2004, Noelle created and curated Alice for The Neo-Futurists which involved more than 50 cast members from numerous experimental theater companies and took place over an entire city block of Andersonville. Using a similar model, she created Fear in 2009 which, touted as "a thinking man's haunted house, " involved dozens of different artists who worked in mediums from graffiti to modern dance. Fear took place throughout the fairly creepy building which houses The Neo-Futurarium. The 2014 production of Alice is the inaugural show for Krimm's new production company.
Upended Productions was founded by Neo-Futurist alumni Noelle Krimm in the summer of 2014. After creating Alice and Fear for The Neo-Futurists, Noelle became really interested in creating theatrical events that collage the work of many different artists into one semi-coherent piece.
Upended Productions' Alice is part of Chicago Artists Month 2014, the 19th annual celebration of Chicago's vibrant art community presented by the Chicago Department of Cultural Affairs and Special Events. For more information, visit www.chicagoartistsmonth.org.


Sign up for a specific tour time by purchasing tickets at www.brownpapertickets.com. Tickets are $20 or $15 with a valid student ID. All performances begin at The Neo-Futurarium, 5153 N. Ashland. For more information, visit www.upendedproductions.com or call 773-817-3956. 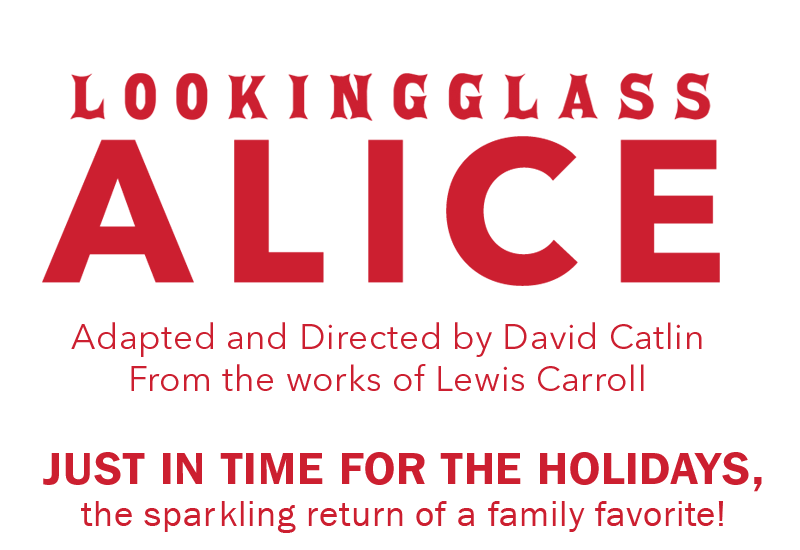 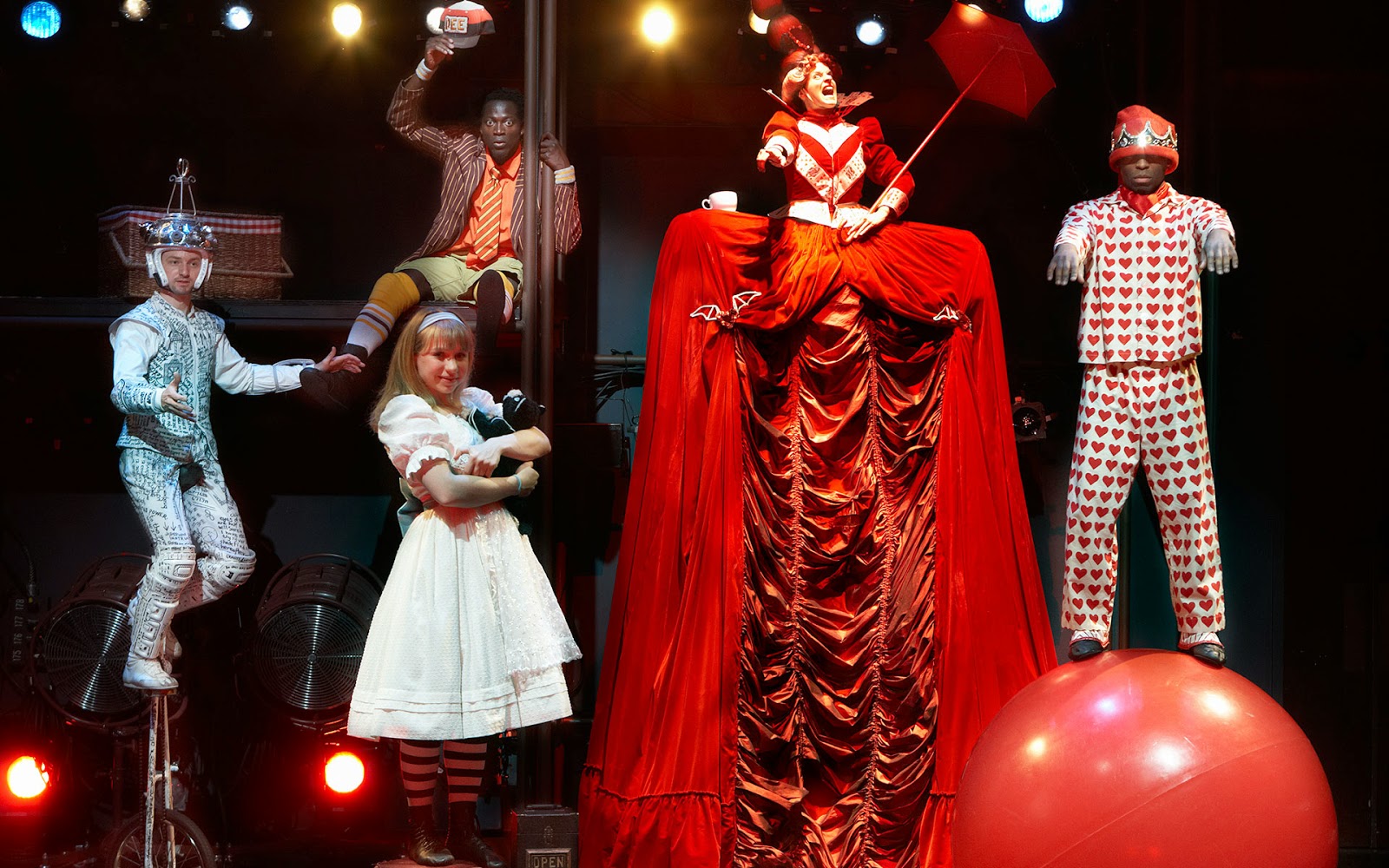 
Imagination soars and laughter and awe abound when this signature production returns with all its gravity-defying spectacle and breathtaking theatricality.  Lookingglass Alice is a marvel for all ages, transporting audiences down the rabbit hole to a circus-infused playground for an exhilarating wonderland adventure inspired by Lewis Carroll’s beloved stories. 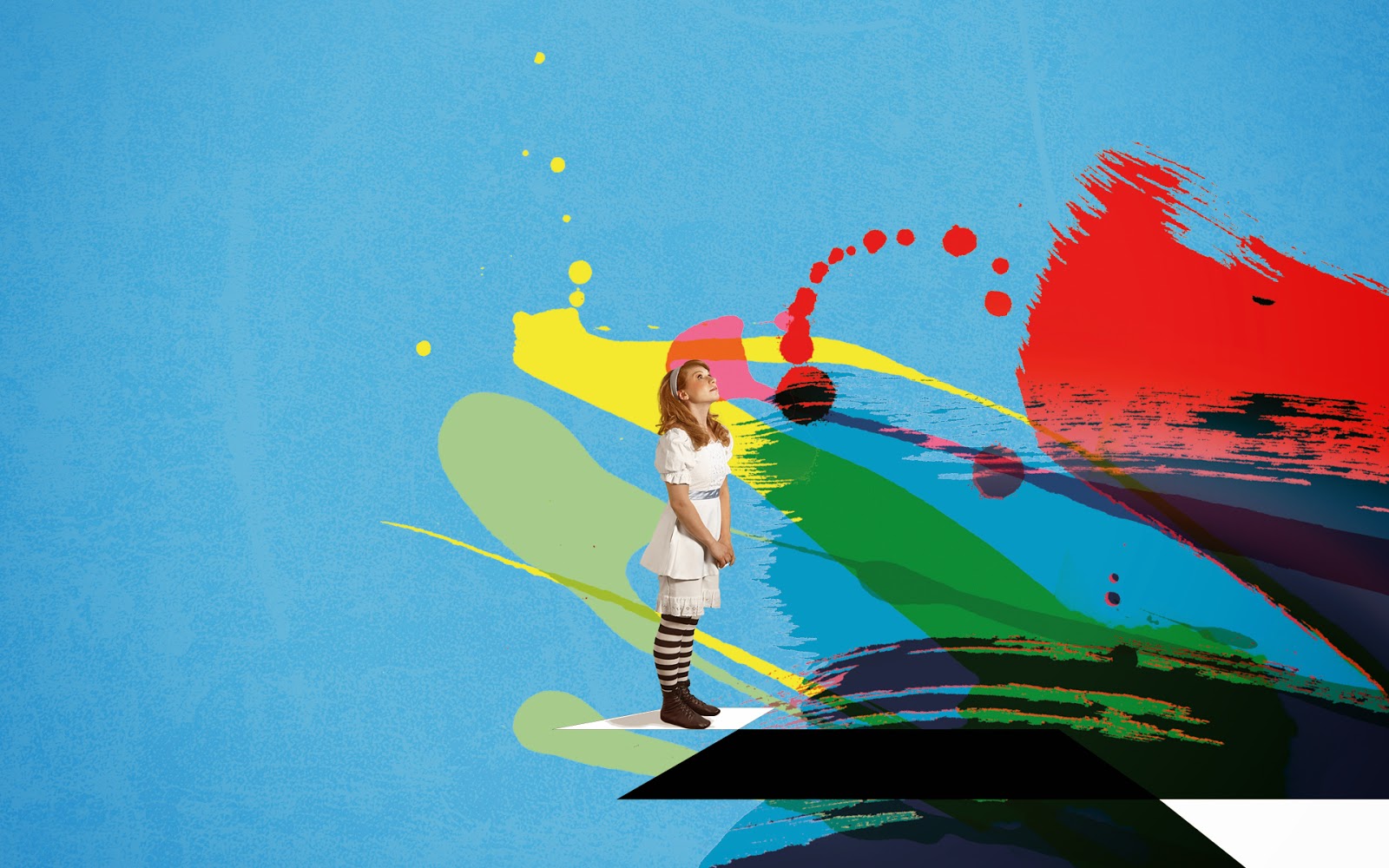 Lookingglass Theatre Company announces casting for the return of signature Lookingglass production Lookingglass Alice, adapted and directed by Ensemble Member David Catlin from the works of Lewis Carroll, produced in association with The Actors Gymnasium. Artistic Associates Lauren Hirte and Lindsey Noel Whiting both return to share the role of Alice. Lookingglass Alice runs November 12, 2014 – February 15, 2015 at Lookingglass Theatre Company, located inside Chicago's historic Water Tower Water Works, 821 N. Michigan Ave. at Pearson. Tickets are currently on sale to the general public and can be purchased through the box office at (312) 337-0665 or www.lookingglasstheatre.org.

Imagination soars and laughter and awe abound when this signature production returns with all its gravity-defying spectacle and breathtaking theatricality.  Lookingglass Alice is a marvel for all ages, transporting audiences down the rabbit hole to a circus-infused playground for an exhilarating wonderland adventure inspired by Lewis Carroll’s beloved stories.


Location:          Lookingglass Theatre Company, located inside Chicago's historic Water Tower Water Works, 821 N. Michigan Ave. at Pearson.
Prices:      Previews are $25 - $40
Regular Run is $40 - $80
A limited number of student tickets are available the day of the show for $20 with valid student ID.
Groups of 8 or more patrons save up to 20%. Call the box office for details. 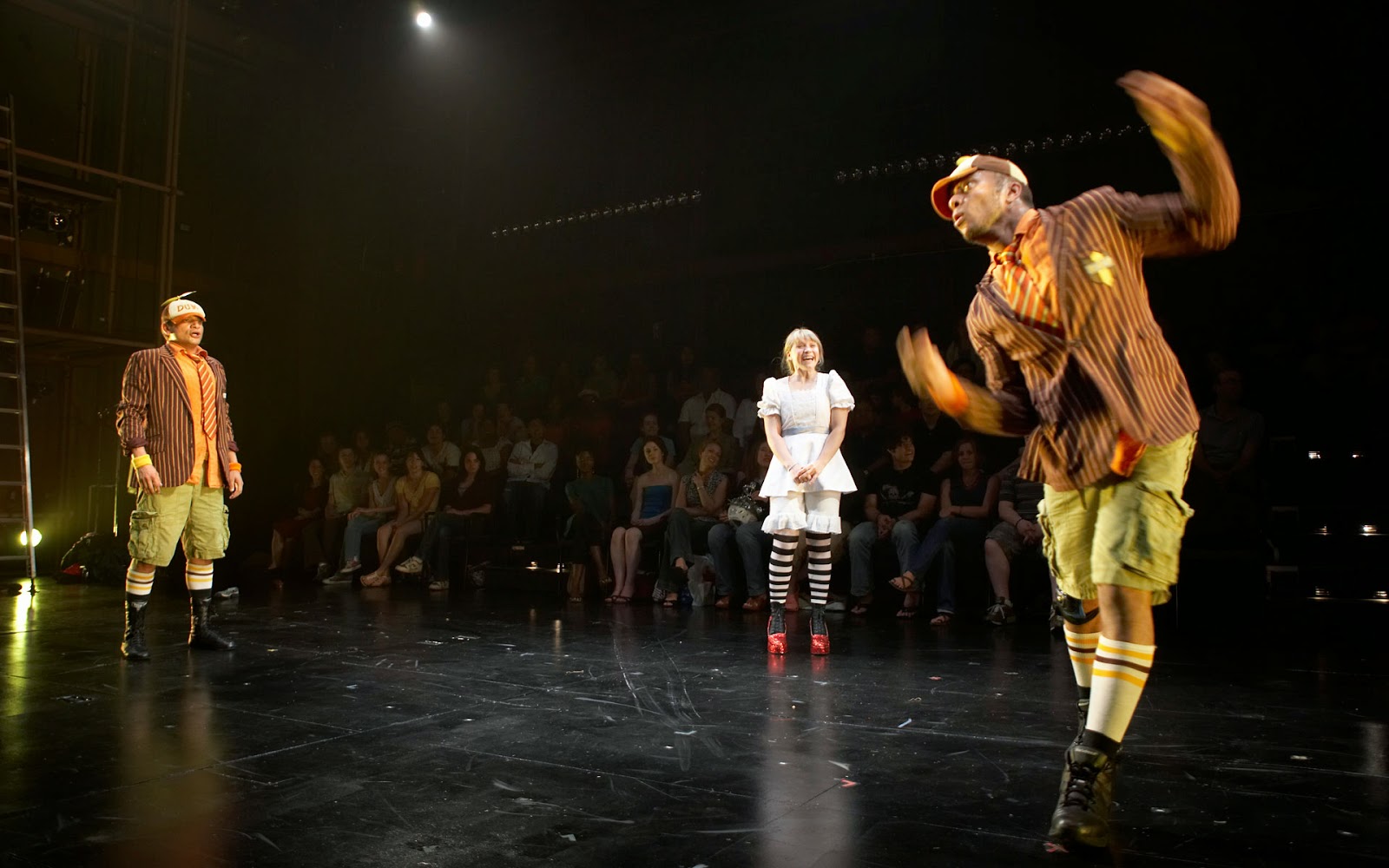