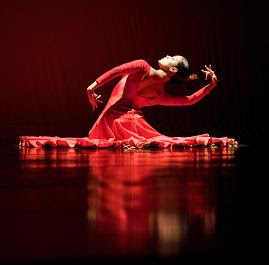 Chicago’s unique contribution to the elegance and passion of Spain’s dance, music and culture is showcased as never before in Ensemble Español's 37th American Spanish Dance & Music Festival, Wednesday, June 12 through Sunday, June 23.

In addition to Dance For Life, this year the Festival partners with two other organizations, expanding the Festival’s reach:  the north side’s Old Town School of Folk Music, and Instituto Cervantes in downtown Chicago which will host a reception and pre-release preview presentation of the "Sobre las Olas" documentary film on Flamenco in the US. featuring Dame Libby and the Ensemble Español (June 13).  Northeastern Illinois University will once again be the site of the popular series of Spanish/Flamenco /classical/folkloric master classes (June 14-20) and the North Shore Center for the Performing Arts in Skokie will host the Flamenco Passion Gala Performances (June 21-23).

FLAMENCO DOCUMENTARY FILM
"Sobre las Olas - A story of Flamenco in the US,” directed by Carolina Loyola-Garcia, will have a pre-release exclusive preview event at Chicago’s Instituto Cervantes Auditorium, 31 W Ohio St., Thursday, June 13 at 6 p.m.

Since the early 20th century, the art of Flamenco has been crossing the ocean traveling to faraway places, including the United States. The legendary José Greco spread this art form throughout the Americas making it a household word. Many have fallen in love with its deep songs, cries, rhythms and movements. This documentary brings us into the heart of Flamenco in the US and to the artists who keep it alive.Featured artists include Carmela Greco, daughter of the legendary José Greco, and Dame Libby Komaiko, Irma Suárez Ruiz and Jorge Pérez of Ensemble Español Spanish Dance Theater.  Other featured artists include Edwin Aparicio, Ricardo Marlow, Jesus Montoya, Barbara Martinez, Rebeca Tomas, Elba Hevia Y Vaca, Marija Temo, Manolo Leiva, Maria Benitez, and Cihtli Ocampo, among others.

Following the screening there will be a Q & A with Carmela Greco, Dame Libby Komaiko and dancers of the Ensemble Español and a Spanish Tapas & Wine reception by Emilios Tapas Restaurant. Tickets are $15 (general admission), $12 (students and seniors) and $10 (IC and ILCC Members).

For reservations and more information contact Josephine DiCesare, Manager of Operations at 773-442-5916 www.EnsembleEspanol.org/festivals
The documentary film "Sobre las Olas- A story of Flamenco in the U.S.,” is funded by  Heinz Endowments, Pittsburgh Foundation, the National Endowment for the Arts and private donors.

North Shore Center for the Performing Arts in Skokie
9501 Skokie Blvd.
Tickets are $26-$46; free parking is available. For tickets, call 847-673-6300 or visit northshorecenter.org. Mini-group rates ($22-$39) are available for groups of 6 or more. Call 773-327-3778.
A portion of the proceeds for the June 21 performance will go to benefit Dance For Life.  There will also be a free pre-performance talk-back and reception with Dame Libby and members of Ensemble Español, beginning at 6 p.m.  For more information call Ensemble Espanol at 773-442-5916 or visit www.EnsembleEspanol.org/festivals Ensemble Español Center for Spanish Dance & Music

Proceeds from June 21 Opening Performance
to Benefit “Dance For Life”

“Festival time is always exciting for us. We are thrilled to be adding the Old Town School of Folk Music as partners and the pre release preview of the documentary film “Sobre las Olas” at the Instituto Cervantes.  I am also thrilled to mark the 20th anniversary of “Bolero” given the overwhelming international reception throughout its history. Sitting in the audience for the 2010 Dance for Life benefit gala concert at the Harris Theater in Millennium park, my heart was passionately pumping as the dancers began and my soul took flight when the entire audience jumped to their feet in uproarious applause as the company devoured the full stage, rushing and twirling, with their Spanish fans and toreador capes. ¡Ole!

We are honored to donate part of the proceeds from our Friday, June 21 opening gala performance to benefit Dance for Life. We are also extremely grateful to once again have the support of our in resident partner, Northeastern Illinois University, the North Shore Center for the Performing Arts in Skokie, plus an incredible roster of guest artists and sponsors, who have generously contributed to the success of our festival”.  Dame Libby Komaiko, Founder and Artistic Director of Ensemble Español.

Dance for Life
The mission of Dance for Life is to raise awareness and funds for HIV/AIDS care, education and prevention while promoting the art of dance in Chicago. In the late 1980's, Chicago dancer Keith Elliott had a brilliant idea: why not bring Chicago's dance community together for one night to dance for life! In 1992, Keith partnered with HIV/AIDS community activist and event fundraiser Danny Kopelson, as well as Chicago dance professionals Harriet Ross and Gail Kalver, to form Chicago Dancer's United. Over the past 22 years, Dance for Life has grown to become the largest dance performance-based HIV/AIDS fundraising events in the Midwest. For more information visit www.danceforlifechicago.com