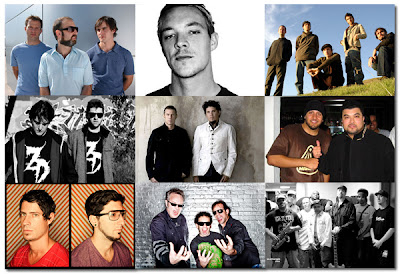 We've got a big, photo filled feature coming soon, with ChiIL Mama's original shots from North Coast Music Festival 2010.   We had a great time and highly recommend it!
Top 3 ChiIL reasons not to miss North Coast Music Festival 2011:
1.   These guys get that everyone doesn't want to just eat funnel cakes and hot dogs.   The food line up is multicultural and delicious, with top Chi town favorites represented.
2.   It's family friendly.   Kids love to rock out, too, and with kids under 10 free, you can bring your littles without breakin' the bank.
3.   Music...music....music.....!!!    Need we say more?!   Check out the sweeet line up below.   There's something for everyone.    We just saw Bass Nectar at Summer Camp Music Fest and they had such a huge draw, the lawn section extended down the food court street.    They blew our minds.   We also can't wait to see the talented Van Ghost and Great Divide again.    We'll have a full set of our concert shots up from the photo pit at House of Blues in the very near future.   It was a pleasure to catch both of them at the show last weekend along with our friends in How Far to Austin.   We're also super stoked to see Gypsy Punks, Gogol Bordello.    Oh yeah.   The Arts of Life and Intonation Music Workshop are also non profits we're always happy to support.
Today, organizers have unveiled the last four at-large festival additions: Latyrx (a Reunion feat. Lyrics Bornand Lateef the Truth Speaker), New Mastersounds, Lettuce and Lance Herbstrong.  After today, the only three remaining spots on the entire bill will be rewarded through the second incarnation of the wildly popular "Toast of the Coast" play-in contest.
NCMF After Parties & No-Service-Fee Tickets
If you haven't grabbed your festival passes yet, now's the time to do so!  Because if you don't have tickets to the festival, you can't buy tickets to the first round of After Parties, announced and on-sale today.   You can grab these tickets free of convenience charges all weekend at The Mid/React/NCMF booth at the Taste of Randolph.  3-Day Pass prices are soon to increase and all the afterparties last year SOLD-OUT so now is the time to buy.
To purchase tickets for these Official North Coast Music Festival After Parties, fans must purchase an equal or greater number of tickets to the Festival itself. A 3-Day Pass or North Coast Festival Grouponallows for purchase of up to 3 late night events tied to the fest, with many more still to be announced.  This way, festival-goers won't lose out on the limited space at these Official afterparties to those that skipped the main event.
Toast Of The Coast Contest
Until July 1st, Midwest artists will be able to enter the competition through the festival website, followed by a two week voting period during which fans can log on to www.do312.com/ncmfcontest and vote once per day. On July 15th, the votes will be tallied and the Top 5 Vote-Getters and the Top 5 Judge's Picks will be chosen to round out our 10 Finalists.  These finalists will each play a short set on July 20th for organizers, judges, and their fans at Chicago's newest concert destination, The Mid (306 N. Halsted St.).  Wow them, as they'll be picking one band, one MC, and one DJ to join the main stage lineup at this year's fest.   Let the games begin!
Grab one of the remaining $95 discounted full-festival presale passes at www.northcoastfestival.com!
Lineup
David Guetta * Bassnectar * STS9
Wiz Khalifa * Thievery Corporation * Fatboy Slim
Common * Rusko * Gogol Bordello
Benny Benassi * Carl Cox * ATB
Lotus * Of Montreal * Wolfgang Gartner
Major Lazer * Little Dragon * Future Rock
Neon Indian * Latyrx * New Mastersounds
Zeds Dead * Big Gigantic * Lettuce
The Budos Band * James Zabiela * SBTRKT
Soul Rebels Brass Brand * Paper Diamond * Felix Cartal
Auto Body * Van Ghost * The Hood Internet
Rubblebucket * Orchard Lounge * Keys N Krates * Lance Herbstrong
California Wives * Midnight Conspiracy * Team Bayside High * Gemini Club
Loyal Divide * BBU * Zebo * The Coop * ProbCause * Wyllys * DJ Thibault
Great Divide * Perfect Kiss * Mario Florek * Nameloc * Pyro Fighter
Ghosthouse * Bandiit * The Werks * The Ill & The Restless * Orville Kline
Midwest Hype * NORdjs * Digital Driver * Fifth World * The Arts of Life Band
Intonation Music Workshop
Plus more artists TBA...
Tickets
Single-Day Passes - $40 (on-sale in June)
Three-Day Passes - $95
Tickets available at www.clubtix.com/northcoastfest
Electric Forest Festival
Please be sure to check out Electric Forest Festival, June 30-July 3 in Rothbury, Michigan, put on by our friends over at and Madison House Presents and Insomniac!
Posted by Bonnie Kenaz-Mara at 8:15 PM