Chicago's got a vibrant and amazing theatre scene.   And it's not bad as a theme either.    Three great shows set in or with a tie in to Chicago are presently closing and opening. 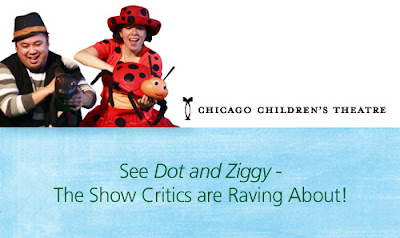 Dot and Ziggy
First, we have theatre for the toddler "swing set" crowd.   Get 'em young and train 'em up right.    This is a delightfully fun show for baby's first theatre experience, presented by Chicago Children's Theatre at Victory Gardens Biograph Theater.   They're closing this weekend, so get bitten by the theatre bug before they're gone.    The show is aimed at 0-4 year olds. 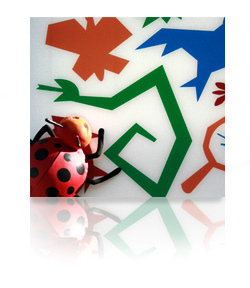 Where in Chicago are Dot and Ziggy?

Right now on the Chicago Children's Theatre Facebook page we're introducing a fun, interactive game for you and your family. Follow along our picture journey to see where in the windy city Dot and Ziggy will visit. Take a look at the clue (right) and click to take a guess where Dot and Ziggy had their latest adventure!

Dot & Ziggy may be neighbors, but they aren't yet friends. After all, what could a ladybug and a skunk possibly have in common? One likes up, one likes down. One flies, one runs. But neither of them knows how to share. With the help of a wise spider, and the encouragement of the audience, they just might find their way.
An ideal “mommy (or daddy) and me” opportunity for communal play, babies, toddlers and their parents are all encouraged to sit together on the floor while two actors, a musician and puppets lead the audience on a stimulating journey exploring color, size and distance. After the show, parents and tots are welcome to stay for story time, which boasts a delightful oversized book that reinforces the Dot & Ziggy experience.
Dot & Ziggy: More Benefits of Baby and Toddler Theatre
More than just a fun, new parent/child communal play experience, parents can actually feel good about taking their wee ones to Dot & Ziggy. Early childhood arts programs are known to promote vocalization and motor skills, increase awareness of and responsiveness to movement and sound, encourage vocabulary growth, develop socialization skills, gain recognition of new aspects in the environment and stimulate the innate sense of discovery. Moreover, many studies have proven exposure to and participation in the arts at a young age is the strongest predictor of arts involvement as an adult (NEA Research Report–“Effects of Arts Education on Participation in the Arts” Louis Bergonzi and Julia Smith, 1996.)   Created by Linda Hartzell, Mark Perry, and Seattle Children's Theatre 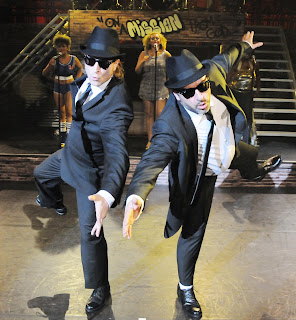 The All New Original Tribute to the Blues Brothers
It may be a smash hit from London, but there's no doubt that this tribute to The Blues Brothers is all Chicago, even with the entire original London cast.   This fun, family friendly show is opening July 6th at The Auditorium Theatre and will only be playing through the 24th.   ChiIL Mama will have a full review for you after opening night.
“The All New Original Tribute to the Blues Brothers,” the smash hit featuring cast members from the original London run, will make its U.S. debut at the Auditorium Theatre of Roosevelt University for three weeks, July 6 – July 24, 2011.  Tickets range from $25-$55 and are on sale now.
Presented by the Auditorium Theatre, the show is a joint production by Charles Aerts Theatre Productions and EJB Entertainment. Jake and Elwood Blues will once again be donning their iconic hats, sunglasses and suits to bring to life a host of the duo’s most memorable hits, including “Shake A Tail Feather,” “Think,” “Respect,” “Gimme Some Loving” and the toe-tapping classic “Everybody Needs Somebody To Love!” This brand new reworking of the celebrated show is directed by Brad Henshaw; an established name on the international music stage who will also star in the show as Jake.The hit West End show is being upgraded for Jake and Elwood’s return to Chicago with a brand new set, updated choreography and new songs.
Following its modest premiere in a small seaside pub in Brighton in 1991, “The All New Original Tribute to the Blues Brothers” quickly became a runaway success. It was picked up by theater producer David Pugh and film director David Leyland, who opened the show in the West End just six months later. The run was extended from six to an unprecedented 46 weeks, playing to more than 150,000 people.

“The Blues Brothers” was a blues and soul revivalist band founded in 1978 as part of a musical sketch on “Saturday Night Live.”  Lead vocalist "Joliet" Jake Blues and harmonica player/vocalist Elwood Blues fronted the band, composed of well-known and respected musicians. The band began to take on a life beyond the confines of the television screen, releasing an album, “Briefcase Full of Blues” and two films, “The Blues Brothers” (1980) and “Blues Brothers 2000” (1998.)
The memorable songs and characters live on in “The All New Original Tribute to the Blues Brothers.” “Jake and Elwood” continue to entertain audiences throughout the world.  Brad Henshaw plays “Jake,” Daniel Fletcher stars as “Elwood” and the duo is backed by one of Europe’s finest seven piece bands, along with three soulful and sassy singers, Jocasta Almgill, Victoria Goddard and Alexus Ruth, aptly named “The Bluettes.”

EJB Entertainment and Charles Aerts Theatre are responsible for bringing the biggest international theatre successes to the Dutch and  international stage. You can find more information about the current and upcoming productions on www.ejbentertainment.com and www.charlesaerts.com.

The Auditorium Theatre of Roosevelt University, located at 50 E. Congress Parkway, is an independent, not-for-profit organization committed to presenting the finest in international, cultural and community programming to Chicago, and to the continued restoration and preservation of the National Historic Landmark Auditorium Theatre. The Auditorium Theatre is generously supported by the Illinois Arts Council, CityArts, American Airlines and the Palmer House Hilton.  For more information about programming, volunteer and donor opportunities or theater tours, call (312) 922-2110 or visit auditoriumtheatre.org.


The Blues Brothers trademark is owned by Daniel Aykroyd and Judith Belushi Pisano.
Another Broadway in Chicago presentation starring Chicago, worth a mention: 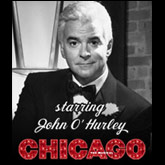 Chicago the musical
It's come and gone, but ChiIL Mama had the chance to check out Chicago while it was here and thoroughly enjoyed the production.    We highly recommended it at the time, and now the production has moved on down to Texas, but we had to give one more shout out considering the theme of this post and our national readership.
**Over the years, Chicago the musical has won 6 Tony Awards®, 2 Olivier Awards®, a Grammy® and thousands of standing ovations.
Chicago's a delightfully dark tale of murder and misinformation, cheating and chicanery in the era of vaudeville villainy.   The patrons behind me couldn't stop comparing the show to the movie, until I almost turned to them and explained how we play the same/different game with the kids whenever we experience a book/movie/live show where we've seen the story in another form.    Hair colors, costumes and even plot points sometimes change.   That's the nature of the beast.
I thought this production was absolutely fun.    We opted to make this one a parents' night out, though there were a smattering of tweens and teens in the audience.    Everyone's children have different maturity levels and every parent has different comfort levels with "Broadway risque" material.
If you're thinking about bringing the kids, watch the movie after bedtime, give the songs another listen and then make up your mind.    This may be a Hair-like musical call, where parents of tweens can get away with taking them, as they'll enjoy the excellent music and the colorful dancing, while the sexual innuendo and mature themes will still go over their heads.    However, parents of teens would think twice.   There are teens who are old enough to handle the plot line, but would be mortified to be sitting with their parents watching lingerie clad murderers dance suggestively.
If you live in an area where Chicago will be playing or your summer travel plans intersect with the tour dates, check 'em out.
Posted by Bonnie Kenaz-Mara at 4:30 PM