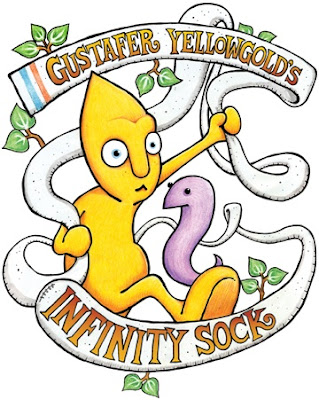 Enter through midnight tonight to win a family 4 pack of tickets right here at ChiIL Mama.   Schubas shows are at 11:00am and 4:00pm THIS Saturday.   Mellow Yellow Monday continues....quite rightly....with the mellowest, yellowest little lemon headed dude we know.


We love Gustafer Yellowgold.   Even my 10 year old son still gets excited and happily helps me check out our review copies each time a new Gustafer DVD materializes.  I'll admit an affinity for the guy myself.    The art work is whimsical, the tunes are skillfully woven, and our favorite part is the quirky sense of humor that permeates everything.   This is good stuff.


Gustafer Yellowgold really shines live, where the DVDs spring to life in a joyous, multimedia concert.    The shows skew heavily toward the toddler set, but you'll see older children, too, and a lot of happy parents singing along with drinks in hand.  Check him out this weekend, for two shows at Schubas, and stop by the web site in the meantime, for songs, games and videos.


Gustafer Yellowgold is no stranger to ChiIL Mama.   He's been our featured artist many times and over the past two years we've given away a number of tickets, several DVD sets and even a signed, collectors' Infinity Sock poster.   This week, we are again offering our lucky readers a shot at free tickets.    Enter below through midnight tonight 6/20.    Our winner will be announced midday tomorrow on Free Ticket Tuesday.


Check out this link for all of our remaining June give aways.   Check back with ChiIL Mama early and often for great weekly prizes, interviews, reviews, live show footage and events updates.

GUSTAFER YELLOWGOLD’S INFINITY SOCK’ TOUR!
LITTLE GUY FROM THE SUN
LANDS IN CHICAGO FOR AN OUT-OF-THIS-WORLD
MULTIMEDIA EXPERIENCE
JUNE 25 – SCHUBAS TAVERN
“Star of Kindie Rock” – Time Magazine
“…the most infectious original songs.  It’s like tapping into some pleasure center in the brain – both adult and kid...absurdly appealing – Grade A” - Entertainment Weekly
“The show is a cross between ‘Yellow Submarine’ and Dr. Seuss.”  - The New York Times
That little guy from the Sun has plans to land in Chicago with his out-of-this-world, multimedia show! The Gustafer Yellowgold’s Infinity Sock Tour, featuring songs and videos from the new DVD/CD set, Gustafer Yellowgold’s Infinity Sock, will come to Schubas Tavern, 3159 N. Southport, Chicago on Saturday, June 25, for two performance, at 11:00 a.m. and 4:00 p.m.
Groovy Gustafer Yellowgold is a small, yellow, cone-headed fellow, who came to Earth from the Sun and has a knack for finding himself neck-deep in absurd situations as he explores his new life in the Minnesota woods.  Illustrator/songwriter/musician Morgan Taylor developed the “musical moving book” Gustafer Yellowgold experience as equal parts pop rock concert and animated storybook.
Gustafer is not just for kids!  Possessing an unusual crossover appeal, Gustafer Yellowgold’s Show has performed as the support act for WILCO and The Polyphonic Spree, as well as headlining kids’ venues all across the U.S., in London, and even in Seoul, Korea!  Gustafer has also been seen off-Broadway in his own productions of Gustafer Yellowgold’s Mellow Sensation and Gustafer Yellowgold’s Infinity Sock.
Gustafer Yellowgold’s Infinity Sock is the first Gustafer Yellowgold show to have a storyline, which follows our hero as he embarks upon an hilarious, mind-bending musical journey in search of the toe-end of the longest sock in the universe.  Gustafer learns much along the way, as he encounters a Band of Bees performing at their late night hangout in the chime-and-timpani drama of ”Beehive,” joins in the Broadway romp "Wisconsin Poncho" (set in an all-cheese clothing store), and comes upon a pterodactyl's unusually calm cat in the Fleetwood Mac lushness of "Cheddar,” all the while learning that everyone has a use for The Sock. The Bacharach-esque "Sock Of Ages” brings the show to an uplifting close, providing Gustafer and friends with a one-of-a-kind look at the interconnectivity among all life on Earth.
Since his creation in 2005, Gustafer Yellowgold has become an international phenomenon, praised by Newsweek as “full of great pop tunes and hand-drawn animation about a li’l fella from the sun.”
The Los Angeles Timesenthused, "Taylor’s whimsical, lightly psychedelic world forms an interesting bridge between adult and kids’ music.”
The Washington Post declared, “He’s a star on stage and screen! … The mix of catchy tunes and offbeat stories has endeared Taylor, and Gustafer, to teenagers as well.”
The Chicago Tribune wrote, “Gustafer Yellowgold has made kids’ music so cool that teenagers and ultra-hip bands such as Wilco want to get in on the act … a shiny blend of pop art and pop tunes.”
New York Magazine named Morgan Taylor “Best Kids’ Performer,” calling Taylor “the most original performer on the family-music scene today.”
For a look at the Gustafer Yellowgold’s Infinity Sock DVD/CD set on which the show is based, please visit http://www.gustaferyellowgold.com/infinity.html .
Check out the Gustafer Yellowgold website at www.gustaferyellowgold.com
Posted by Bonnie Kenaz-Mara at 1:40 PM