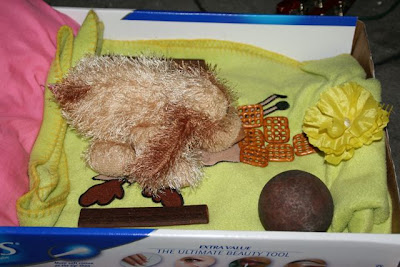 Alia Serendipity's "Memories Box" by Sage
June 21st marked the summer solstice, but it was also a special day in our family.   Although our eldest dog was a foundling "alley score" as a 3 week old pup, nursed on a bottle, and of unknown actual date or origin of birth, this was the day we always celebrated Alia Serendipity's birthday.    She would have been 17 this week, but we had to put her to sleep April 1st.
Alia was a special part of our lives for nearly 18 years.   She was present at both of our children's home births and they chose to be there for her death.    On Tuesday we took time to remember her.   I'd suggested gathering photos, writing poetry, writing or sharing our memories of her....    However Sage had her own ideas for how to mourn and celebrate her four legged family member.
For Mellow Yellow Monday, here's Sage's "Memories Box" containing Alia's canister of ashes, toy likenesses of Alia and Xanthus-her lifelong Husky/Malamute buddy who died at 13 back in 2005, and a leopard box Auntie Maia sent from Portland for memories of Alia.   Sage also included some of her favorite toys and treats (which our husky mix rescue puppy, Igraine the Brave or Iggy Pup, happily ate later.)
Allie's all time favorite odd dog food was clementine oranges, but we were out of them.   We'll include those when we bury her ashes in the back yard, under our Red Osier Dogwood Tree (AKA:  the Bubby and Ubu Bush) where all our past dogs are remembered.   Their ashes go back into the earth and their collars and tags hang from the branches.   When we hear them clink and chime, the kids say the ghost dogs are running with the wind.
For our solstice birthday remembrance, Sage also broke out her guitar and made up a wonderfully haunting song for Alia.    After the first 2 days of Girl's Rock Camp, Sage had already really taken to guitar and was enjoying writing her own songs and expanding on the new chords she's learned.
We'll have more Alia stories and photos in the weeks to come.   She was a true character and a well loved part of our family. 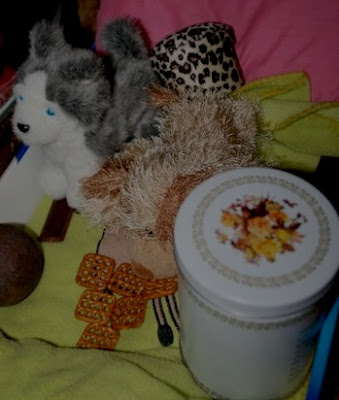 Click below for more Mellow Yellow glimpses from around the world.